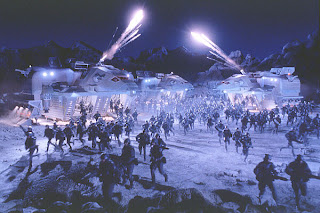 In 2041 ... Switzerland joined the United Nations*, now a military alliance. What had once been merely a debating society during the twentieth century had turned by the rapprochement of the super powers into ... an active military and economic alliance. An alliance whose purpose ... was to ensure that the less powerful nations of the Southern Hemisphere and Middle East continued to supply them with raw materials.

As their abundant resources propelled [them] to importance, old grudges against the “exploiting” powers radicalized the nations of the Southern Hemisphere. Controlling an ever greater part of the world's dwindling resources, the nations of South America, Africa, and Arabia used the massive wealth they were accumulating to modernize their countries, and their armies. Together they formed the Confederation of States, whose expressed purpose was little less than the domination of their former “oppressors.”

As these nations grew in both economic and military strength, they began looking for ways to flex their newfound muscles. The older countries, fading in both importance and economic strength, sought to reassure themselves by asserting their own power whenever the opportunity to do so safely arose. Soon minor skirmishes, mostly at sea, constantly threatened to erupt into a greater conflict.... By 2032 the world consisted of two mega-nations and a number of backward neutrals who were completely unable to affect the situation.

Extrapolating from trends visible more than a decade and a half ago, renowned science fiction author Gregory Benford devised the foregoing premise and invited a group of his peers to describe a resource war between those two planet-spanning mega-states. Eager to control the globe without destroying it, the antagonists keep moving the battle lines away from the planet, eventually fighting a full-scale interplanetary war over the Solar System's resources. 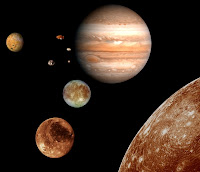 In that long and increasingly pointless war of attrition -- “Neither side will surrender, neither will admit it might be wrong” -- the energy- and mineral-rich Jovian system was the grand prize.

Professor Michael T. Klare of Hampshire College avoids sci-fi extravagances in presenting a vision of the coming global resource wars. Klare, author of Blood and Oil: The Dangers and Consequences of America's Growing Dependence on Imported Petroleum, writes that we confront an era of perpetual war, economic regimentation, and garrison state oppression – a system he calls “Energo-fascism.”

“The rise of Energo-fascism can be traced to two overarching phenomena: an imminent collision between energy demand and energy supplies, and the historic migration of the center of gravity of planetary energy output from the global north to the global south,” writes Klare.

As this trend accelerates, Klare foresees the following developments, some of which are already visible in a limited sense:

“Disparate as [these developments] seem, they all share a common feature: increasing state involvement in the procurement, transportation, and allocation of energy supplies, accompanied by a greater inclination to employ force against those who resist the state's priorities in these areas,” Klare points out.

(Although Klare seems to appreciate the deadly consequences of giving the state a monopoly on the use of force, he unfortunately has yet to re-think the merits of disarming the civilian population through UN-centered efforts to outlaw non-state possession of "small arms.")

Klare's analysis tacitly acknowledges a largely ignored fact that was highlighted by The Economist (subscription required) last August: Most of the world's energy resources are already either state-owned or state-controlled. The world's thirteen largest oil and gas firms, for example, are either partially or wholly nationalized through “state-owned firms through which governments retain profits from oil production.” Exxon, the world's largest private oil company, comes in at number 14 on that list.

All told, 16 of the top 20 oil and gas firms are State-owned and control roughly 90% of the world's oil. These national oil companies (NOCs) are riddled with the corruption and inefficiency that are inescapable symptoms of state ownership or control. As the Economist points out: “Few of the princes, politicians and strongmen who wield ultimate authority over these firms can resist the urge to meddle. At best, that leads to the sort of inefficiencies found at most state-owned firms.... At worst, the business of pumping and selling oil [and natural gas] is entirely subsumed by politics,” as when the Russian regime of Vladimir Putin choked off the flow of natural gas to Ukraine a year ago, in the middle of winter – the time of peak demand.

Klare considers Putin's Russia – which has been using undisguised state violence to consolidate control over the immense energy wealth of Russia and the “near abroad” -- as the paradigmatic “Energo-fascist” regime. Putin himself, in his Ph.D. Dissertation, set forth what could be considered the founding premise of that system: “The state has the right to regulate the process of the acquisition and the use of natural resources, and particularly mineral resources, independent of on whose property they are located. In this regard, the state acts in the interests of society as a whole.”

“No better justification for Energo-fascism can be imagined,” comments Klare. Indeed, Putin is to be commended for his candor; his counterparts in Washington are acting on the same premise while trying to conceal their intentions.

For example, the Energy Policy Act of 2005 contains a provision usurping state and local control over decisions related to energy infrastructure: Specifically, the Act deprived them of the authority to approve placement of natural gas “regasification” facilities.

Some communities had resisted construction of the huge facilities in local ports for various reasons – such as concerns over safety or possible terrorist attacks. This is a splendid example of how federalism should work, since other communities would be eager to exploit the resulting economic opportunities. But the Bush regime now has the power to veto those decisions in the name of acting in “the interests of society as a whole” (as Putin would put it).

Klare makes a plausible case that this could prefigure the wholesale federalization of all decisions having to do with energy resource development and allocation.

It's not unreasonable to see the theft of Iraq's energy resources by Washington (with a limited buy-in from a handful of cohorts) as an application of the same conceit on the international stage, as well as the first of many resource wars.

“By militarizing the energy policies of the consuming nations and enhancing the repressive capacities of client regimes, the foundations are being laid for an Energo-fascist world,” Klare predicts.

If he is right – and I fear he may be – we'll never have to worry about wars erupting in the Asteroid Belt or on the moons of Jupiter. Caught between apocalyptic violence and dystopian tyranny, humanity would never escape earth's gravity well.

*Actually, Switzerland became the 190th member of the United Nations in 2002, alas.