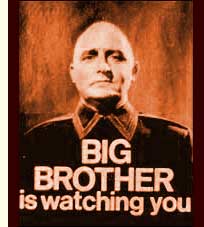 The most critical disclosure offered by the Washington Post's report on the “OneDOJ” database being built by the Department of “Justice” is found buried near the end of the piece – as we'll see anon.

Although the Post refers to the database as OneDOJ, it is also known as the National Data Exchange, or N-DEx. However we refer to it, the system would allow “state and local police officers around the country to search millions of cases from the FBI, Drug Enforcement Administration and other federal law enforcement agencies,” as well as information compiled by state and local police agencies. The system, which a present is limited to a pilot program involving a small number of agencies, “will be a central mechanism for sharing federal law enforcement information with local and state investigators,” observes the Post.

“The goal is that all of U.S. Law enforcement will be able to look at each other's records to solve cases and protect U.S. Citizens,” insists Deputy Attorney General Paul J. McNulty. (.pdf) “With OneDOJ, we will essentially hook them up to a pipe that will taken them into its records.”

Michael Hampton, a diligent investigator of the Homeland Security State, points out that within the next three years, the N-DEx/OneDOJ system “will provide local and state law enforcement with access to each other's data. N-DEx will contain incident/case reports, arrest, booking and incarceration data, and parole/probation data contributed by DOJ and participating law enforcement agencies.”

A “Justice” Department PowerPoint briefing found by Hampton points out: “Ideally, N-DEx would obtain its data from the 50 States' repositories, however, this model is not occurring nationwide and as such, N-DEx must be able to obtain its data through a variety of options as permitted by policy.”

Those “options” would likely involve data streams carrying huge volumes of personal data about people who have never seen the inside of a jail cell or courtroom. All of that information would be passed along the federal pipeline to officers making traffic stops, or conducting checkpoints. That pipeline will not be equipped to filter out unproven or baseless allegations. As the Post points out, through the system “tens of thousands of local police officers could gain access to personal details about people who have not been arrested or charged with crimes.”

While the database will include details harvested from proctoscope-level scrutiny of the public at large, however, it will demurely refrain from intruding into the affairs of the State's loyal servants. Notes the Post:

“Much information will be kept out of the system, including data about public corruption cases, classified or sensitive topics, confidential informants, administrative cases and civil rights probes involving allegations of wrongdoing by police....”

This is the above-mentioned “critical disclosure” offered in the Post story. In the omissions we can see, once again, the true priorities that govern the Homeland Security State: Protect the Regime and its servants uber alles, while treating the public at large as criminals who are free only by the grace of the Almighty State. 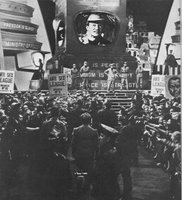 It's worth noting as well that the development of this huge database has proceeded without so much as a syllable of protest from the Republican-aligned conservatives who, a decade ago, rent the air with anguished cries over the Clinton White House's illegal acquisition of “raw” FBI files on hundreds of Republican officials.

GOP fellow travelers charged – quite plausibly – that the 8-900 files – each of which was an omnium gatherum of personal information, some of it little better than gossip – would be used as what the Russians call compromat against the Clinton administration's political enemies.

“It's only when Republicans hold the White House that the networks fear an `imperial presidency,'” whined Bozell. This may be true. It's also entirely irrelevant to those of us who, like myself (I was a spokesman for the National Impeach Clinton ACTION Committee) have nothing but contempt for both of the Ruling Party's retail outlets.

Ten years ago, Republicans were in a lather over the fact that Party leaders and operatives were vulnerable to political blackmail. One year ago, many of the same Republicans insisted that only “terrorists” needed to worry about their telephone and e-mail communications being intercepted by the NSA.

Now we see the “Justice” Department rolling out the first stage of what they hope will be a seamless data network connecting every police agency and officer, giving them access to what eventually could be every recorded personal detail about every U.S. Citizen.
at 3:10 PM

OneDOJ? as in one national police agency? man, i don't drink, but this info makes me want to go grab a bottle of "eau de vie". man, great piece. you know, i believe the folks doing this have the best intentions (well, some of them), but fail to realize the ramifications...the long term effects of what they are doing.

part of your article reminds me of the system--CRC--used by the military police. no matter what was/[we] input, it stays in the system for 40 years. i remember how on a few occassions, my desk sergeant got a case wrong (traffic accident) and i was asked to review the case. when i realized our mistake--who was at fault (and in italy, the americans were surprisingly at fault in all traffic accidents...i liked the one case where an italian on a moped got hit by an oncoming italian motorist trying to pass an american vehicle; he then rebounded and rolled under the american vehicle; the carbs charged the american driver with manslaughter...go figure!!), i would have the desk sgt correct the problem...but the guy's info--case--was still in the system. all we could do was amend the report and hope, i'll say that again, HOPE, that whenever his name pops up in the system, the person reading it sees what we added and the fact that we cleared the service member of any wrongdoing.

this is ominous. God only knows the power in a person's hands who chooses to abuse this database for personal gain, profit, or malicious intent against another person. makes ya not want to get a SSN and disappear into the mountains. :-(

It's funny, when I discuss anarchism with a skeptical but open-minded friend, he always says that he doesn't think it will ever work because anytime people think of a world without government, they think of chaos and it scares them. Of course, I try to point out that this is because they've never thought creatively or intelligently about how the market can replace the functions of the state...

But what I think is most ironic is that our country and our lives are daily becoming the laughable real-life versions of 1984 and Brave New World, and no one seems frightened at all. No one even seems to be paying any attention.

The idea of a "chaotic" anarchism without government may frighten people, but I should think they would choose the uncertainty of that world over the certain darkness of a Nazi Germany. Right?

It was only a matter of time before this type of system went nationwide.

Government trails business in most developments of technology and its uses. For many years businesses have been keeping tabs on people by tracking what they buy and sell, like and dislike, and where they go. This information is available to anyone who pays for it.

Even several years ago anyone reading this blog could be located if someone was looking for them. Tax records and real estate holdings burn your location quickly. Ditto for anything you've done with a credit or debit card. If you used your name when ordering from Dominos Pizza, set up an account at a movie rental outlet, submitted a warranty card for your chain saw........you get the point. This information has been easily obtained for years by the fuzz or anyone else. It just costs money to use the networks. I'm sure the top players in this so-called industry are involved in the development of the federal program.

The information age has been upon us for quite some time. It's not going away. What are we going to do about the exchange of data and how it's used? How many Americans have avoided being desensitized about issues of privacy? Does anyone even care who knows what about whomever? These are the questions that have been sent up in the baskets of the trial balloons for years. We're almost at the point when no more questions are needed because privacy is extinct. And they know it.

I just heard about you getting dumped by JBS, allegedly over this blog. I wrote to them and they haven't responded yet.

What's the scoop on that? You can email me at teno@new.rr.com

Will, I was a "victim" of I.D. theft 5 years ago---$50K in debt racked up in my name (I had no debt myself)and this was not done by someone I knew. That mess is still not cleared up and perpetuates itself to an extent, and I just don't bother to really work on it any more. But it has occurred to me that at a traffic stop, if a P.O. "saw" that I had bad debt in another state {credit report records}it could cause trouble for me.

Gary Allen put it well in his book None Dare Call It Conspiracy:

"Yet, despite high hopes and glittering campaign promises, these problems continue to worsen no matter who is in office. Each new administration, whether it be Republican or Democrat, continues the same basic policies of the previous administration which it had so thoroughly denounced during the election campaign"