How to Deal With Taxmen and Other Thieves 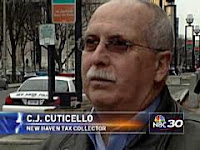 Carjacker Cuticello: Knocked flat on his, um, Cheney by a woman. He got off easy.

Last night, a resident of New Haven, Connecticut was approached by C.J. Cuticello, a tax collector bent on seizing her car because of $536 in outstanding taxes and fees. According to the local NBC affiliate, the woman reportedly “pushed Cuticello to the ground, got in her car and ran over his foot, then backed up into the tow truck before speeding away.”

I admire her restraint.

It's entirely appropriate to use lethal force to repel a carjacking. And horse thieves were often used to stretch ropes in the Old West. Cuticello is no better than a carjacker or horse thief and deserves to be treated that way.

Predictably, the TV station – you know, a local outpost of the “liberal” (“statist” is a much more accurate description) media – described the citizen as an assailant and “scofflaw,” and the would-be carjacker as the victim of a “hit-and-run driver.” And just hours earlier, the station had presented a sympathetic profile of Cuticello, who lamented how difficult it was to shake down local motorists, and the sad duties he performs as a government-licensed car thief

Using a sophisticated plate identification device called a Bootfinder, Cuticello identifies and seizes vehicles, which are held in a city-owned lot until the ransom is paid (the tax plus whatever additional fees the syndicate behind this racket can devise). Using a fleet of three tow trucks, Cuticello and his gang have stolen more than 1,000 cars in the last several months; the local crime bosses expect them to track down a total of 10,500 vehicles and plunder a total of $2 million in revenue.

(Cuticello, by the way, also eagerly networks with other parasite privateers eager to get a piece of the plunder.)

As TheNewspaper.com notes, the New Haven city government claims that it can seize cars from those owing as little as $50 in unpaid parking tickets. Cuticello, who richly deserves to be made acquainted with the decorative uses of hot tar and chicken feathers, has been stealing cars for the local government for several years.

Like a child molester seeking vulnerable prey, Cuticello lurks in the shadows of large gatherings of distracted potential victims: He has prowled Wal-Mart parking lots and student parking areas at Yale University (where he targets out-of-state students). He's even swiped cars during Mass at the local Saint Rose of Lima Church, in the process chewing out the local Priest – who was forced to leave the confessional to deal with the carjacker.

I find it inexplicable that Cuticello had gotten away with this for as long as he did before running into someone willing to push back. And it is delicious to the point of rapture that when he finally got his back dirty, it was a woman who put him there.

Centuries ago, our colonial forebears, who suffered under an absolutist government much more civilized and much less intrusive than ours, would occasionally inflict humiliation of various kinds (including, when deemed necessary, physical abuse) on tax collectors and other agents of official injustice.

The treatment given to Cuticello was squarely in that estimable tradition; my only complaints are that it was entirely too mild, and – given how commonplace corrupt abuses of power like Cuticello's have become – altogether too uncommon.

Some would protest that such sentiments are un-American. In fact, they're more properly described as (read this carefully, now) ur-American.

Before he became the ringleader of the uncouth radicals who seized independence from Great Britain, Samuel Adams was a tax collector, his livelihood provided by a share of his collections.

Even in that loathsome occupation, Adams' fundamental decency proved insurmountable: He eventually went broke because he refused to put the screws to people who couldn't pay their assessments; sometimes he paid the tax bills himself. Ironically, his experiences as a tax collector convinced him of the injustice of the Royal tax system, and the social networks he developed in that occupation proved useful in organizing the rebellion that led to our independence. In the words of biographer Mark Puls, from his days as a tax collector, Adams “developed a feel for the pulse of public opinion that no other local leader could match.”

As Puls notes in his excellent book Samuel Adams: Father of the American Revolution, Adams was among many whose properties were scheduled for seizure by Royal authorities in Boston because of inherited debts arising from the collapse of a land-bank scheme:

“In August 1758, a notice appeared in the Boston Newsletter announcing that the land-bank commissioners ordered a public auction the following day of Adams' father's estate, which included the house in which Samuel still lived, the malt brewery, the wharf dock, flats and other buildings, along with gardens and other adjacent property. The notice was signed by Sheriff Stephen Greenleaf. Adams fired back a letter to the sheriff, pointing out that his predecessor had also tried to divest the family of its property but was unable to do so because the action was deemed `illegal and unwarrantable.'”

Adams blatantly threatened the Sheriff, and visited the auction to threaten and intimidate anyone who set foot on the property.

The Adams property remained unsold, and the inherited debts were never collected. Neither did Adams make up the shortfall in tax collections for which he was legally liable, according to colonial statutes. This isn't because he was a scofflaw and a dead-beat. He was convinced that it was unjust to take his property because his father had been left with debts on account of official chicanery; he was similarly convinced of the injustice of the taxes he had been paid to collect, a fact demonstrating that his motives weren't self-interested.

In his youth, Adams displayed a “dislike for authority of any kind,” by middle age he had come to understand the critical distinction between authority and power.

“Adams believed in the rule of law, that freedom entailed an obligation of moral and rational behavior,” notes Puls. “He sought not to overturn colonial society but to preserve it from British intrusion” -- which meant, when necessary, interdicting the enforcement of unjust laws and policies, frustrating the corrupt collection of public revenue, and eventually taking up arms against the established government.

Which brings us back to the putatively criminal attack on C. J. Cuticello.

Eventually, the police will track down the woman who heroically knocked Cuticello on his tax-fattened Cheney. She will face as many criminal charges as can be conceived by the degenerate mind of the local prosecutor. A trial will be held.

This will present a perfect opportunity for jury nullification – and nothing less than this will suffice.

Should a jury decide that it is not a crime for an otherwise law-abiding citizen to beat down a government-authorized carjacker, New Haven will experience a sudden shortage of the same. This would, in turn, compel the local government to re-examine the merits of a revenue-collection scheme that depends on enforcement measures that are utterly criminal.

If this doesn't happen, esurient municipalities across the country will enact versions of New Haven's carjacking scheme. And just as surely as water will wet us, as surely as fire will burn, some people will eventually find decorative uses for the lifeless bodies of those sent to carry out those seizures.

For the record: I think this is something we should avoid, not just because I don't want to see people (even tax collectors) getting killed, but also because of the even more horrible things that would come thereafter.

This will present a perfect opportunity for jury nullification – and nothing less than this will suffice.

I agree, but again the commoners in said jury have to be of a hardy lot, knowledgeable in the law, constitution, and their important role in the justice system. Not surprisingly, most commoners don't fit that profile and are an ignorant lot on the whole. I mentioned this in your Police Perjury, and Burglars with Badges comment thread:

Whatever happened to jury nullification? Oh yeah, for that to happen requires informed, honorable, and constitutionalist-minded commoners composing the jury rather than the aforementioned.

While you're fascinated (or alarmed, it's hard to distinguish sometimes) with "the State" itself, the culture elsewhere is rotting at an ever faster pace in so many other areas of life. I ain't worried about it as I believe America is today without a doubt (probably been for some decades morphing into one in fact) a farrago and a farrago nation is doomed to wither and die.

On that note, why the growth of the State, that we see increasingly flexing its muscles upon the hapless, should be a surprise to anyone is puzzling to me.

It should be a no-brainer.

Wait... when you decided to live under the protection of the United States, you agreed to abide by certain laws am I not correct?

Paying taxes is one of those laws. Heck, why not throw these people into jail instead of impounding their cars? What this woman did was just as immoral and illegal, she ran over this person who simply stood in the way of her car, she could have backed up, asked the person to move, or well anything else. But intentionally run this person over? (There is a video available, have you not seen it?)

Sir, your views on freedom are somewhat distorted.

The "person who stood in the way of [the driver's] car" was bent on STEALING that vehicle. It matters not one whit that the local government supposedly authorized him to do so. He got hurt, just as any other carjacker would have. This is covered under "assumption of risk," as far as I'm concerned.

There is nothing "distorted" of this view of taxation; it is as American as the Boston Tea Party or the occasional bouts of righteous violence that greeted Royal Tax Collectors in the early 1770s. We're badly overdue for a revival of this element of our storied patriotic heritage.

What is genuinely distorted is the notion that government enactments supposedly sanctifying theft are "laws" in any sense that moral people should respect.

As the recent slaughter at V-Tech illustrates, government doesn't do a damn thing to protect us, although its pestilential agents excel at finding creative ways to plunder us. The question is: Who will protect us from our supposed protectors?

As a follower of Jesus, I hope you'd also know that murdering another is never right--"appropriate to use lethal force on a carjacker"--"CJ is no better than a carjacker"--

You think it's ok to "murder" him?

Also, as a follower of christ (hah!) you think that you have a right to not pay taxes?

What a horrible representation of Christ. Maybe you should spend some time with your bible.

I agree with David.

And I have to say that the author's take/spin on how this story actually played out are extremely warped.

Nevermind the fact that it's never ok to run someone over with your car. Never.