The Christian Right and the "Fatal Embrace" 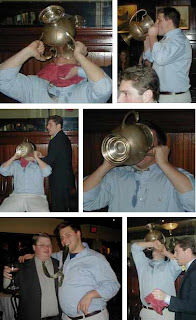 No, these aren't out-takes from a "Tommy Boy" sequel; they're snapshots of tomorrow's Christian conservative GOP leaders. (Tip of the sombrero to The Gaelic Starover.)

It's ironic that Vladimir Lenin, notorious for the length and tedium of his pronouncements, coined what may be the world's briefest and most potent political truism: kto kogo, “who/whom,” understood to mean “who does what to whom.”

This is the defining question of modern politics, according to Lenin and those who subscribe to his insights – a category that includes pretty much everybody who aspires to political power.

Lenin's who/whom dichotomy has come to define democratic politics, in which a roiling mass of collectivist constituencies contend to be the “whos,” as it were, rather than the “whoms.”

Among the most tragic and dangerous developments to occur during the reign of King George the Second was his success in luring much of the Evangelical Christian church into an active alliance with the State. In assessing the influence and priorities of the self-designated Christian Right, it's useful to ask whether its leadership displays more fidelity to the Golden Rule or to Lenin's maxim, which is its direct antithesis.

In addition to being “God's perfect law of liberty” (James 1:25), the Golden Rule is the only basis on which humans can construct a political order compatible with freedom and peace. It is to be expected that those who profess the name of Jesus Christ would understand this principle and act on it in the political realm, as in every other sphere of life.

In practical terms this would mean contracting the role of the State rather than expanding it. But once again, since the emergence of the Religious Right in the late 1970s, the defining ambition of most politically conservative Christians has been to seize control over the State and occupy its “commanding heights” -- an expression associated with one of Lenin's most astute disciples, Antonio Gramsci – rather than reducing its size, power, and influence.

In 1988, as Kevin Phillips has documented, George W. Bush, the indolent wastrel son of the family dynasty, was chosen to become its emissary to the Christian Right. After taking control of the presidency, Bush became its leader ex officio. In ways both subtle and gross – and few things are more vulgar than the outright bribery practiced through the Office of Faith-Based Initiatives – the Bush Regime has seduced most of the Christian Right's leadership caste into active collaboration.

And tens of millions of Christians who displayed a sensible loathing for the State during the reign of Emperor Clintigula have dispensed with such concerns under the reign of Bush the Blessed, on the assumption that at long last they have joined the “do unto others” crowd.

These developments have led many on the Left to conclude that the alliance between the Bush administration and the Christian Right has begotten an embryonic version of American Fascism. This is the view presented by Harvard Divinity School graduate and former New York Times correspondent Chris Hedges in his new, unimaginatively titled book, American Fascists: The Christian Right and the War on America.

Thinly researched and oddly pedestrian, Hedges' new book is largely barren of the unexpected insights that adorned his most recent previous offering, War Is a Force That Gives Us Meaning.

An even more serious defect in American Fascists is the author's reflexive embrace of the same who/whom dichotomy he correctly discerns as the Christian Right's organizing principle (even though he doesn't use that specific expression).

This is quite lamentable, given that Hedges does manage to provide some timely and useful insights, although they are lost on some who prefer to “review” the book without actually reading it.

Surveying the often nauseating opulence found among top-tier televangelists and moolah-mooching mega-church mullahs, Hedges writes that where Christian Right activism intersects with the “prosperity gospel” movement, the result is a really nasty form of collectivist materialism.

“The movement offers ... the absurd but seductive promise that those who are right with God will rise to become spiritual and material oligarchs," he opines. "They will become the new class.”

Hedges defines the “new class” as a product of a “strange fusion between this new, flamboyant gospel of prosperity and America's celebrity-driven culture,” which is a subdivision of a transnational elite “creating a global marketplace where all workers, to compete, will have to become like workers in dictatorships such as China.... [T]his new class seeks to reduce the American working class to the levels of this global serfdom.”

Handicapped by Marxist assumptions about the economy, Hedges insists that the emerging global economic system is a form of untrammeled capitalism, when in fact it is a particularly brutal form of corporatism, in which politically favored corporate interests are allied with the State.

Despite his economic misunderstandings, Hedges does seem to understand that the system he describes has an immense capacity for lethal oppression, since he laments that the Christian Right's rank and file, seeing themselves “empowered by faith,” are oblivious to “the gross injustices and repression that could well boomerang back on most of them” once the present political alignment changes.

Unfortunately, Hedges, despite all of his anguish over the Christian Right's role in building the Leviathan State, seeks not to dismantle that monstrosity, but rather to turn it against conservative Christians.

“The radical Christian Right must be forced to include other points of view to counter their hate talk in their own broadcasts,” Hedges insists, obliquely referring to Orwellian measures such as “hate crimes” laws and the so-called “Fairness Doctrine.” “They must be denied the right to demonize whole segments of American society, saying they are manipulated by Satan and worthy only of conversion or eradication. They must be made to treat their opponents with respect and acknowledge the right of a fair hearing even as they exercise their own freedom to disagree with their opponents.”

“Passivity in the face of the rise of the Christian Right,” Hedges concludes, “threatens the democratic state.”

But the State -- in whatever form it takes -- is the problem and chief source of danger, not supposed abuses of individual rights by people who express "intolerant" viewpoints. As someone suckled on statist assumptions, Hedges simply cannot see and understand this.

Similar Marxist-derived myopia can be found throughout Hedges' book. For instance: Hedges consistently denigrates those who would replace State-imposed redistribution programs with private charity, apparently on the assumption that material aid not sanctified through the exercise of State coercion is somehow an abomination.

Just like those he volubly condemns, Hedges believes that the State should exploit religion in order to accomplish ideologically dictated designs – an arrangement described by Jean-Jacques Rousseau, Lenin's intellectual ancestor, as the “civil religion.” Hedges' enthusiasm for this arrangement is bizarre, given that as a long-time war correspondent he was a witness to the hideous things wrought in the name of various contending versions of the civil religion.

One of the strengths of his current book can be found in the often shocking descriptions of the militarist bloodlust that has come to define most of the Christian Right. “War is the final aesthetic of the movement,” Hedges writes, and I find it difficult to disagree – even as I find myself puzzled by his eagerness to use the State to wage war against “intolerance.”

If there is one redeeming quality to Hedges' book, it can be found in the possibility that its prescription for regimenting the Christian Right may help at least some within the movement to repent of their potentially fatal embrace of the State.

Apparently, government welfare and social engineering is the force that give him (Hedges) meaning.

We are the sheep of Christ. Better to let the petty ruling be done by goats; they have far better instincts about trouble than we sheep. Our calling is to eternal things, and we should stick to making more sheep.

Can you please post these articles so that we can print them up individually rather than have them ramble together? It's very hard to forward a single article to someone or even print up just one article to pass on when they all connect. And, with the colored background used, it's almost impossible to copy and paste too.
We just want to be able to spread the word.
Thanks!