Romney: Official Candidate of the War and Torture Party? 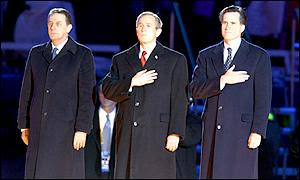 “Paris is well worth a mass,” insisted Henry of Navarre as he underwent a politically motivated conversion to Catholicism that secured his throne as the first of France's Bourbon kings.

Henry had previously “converted” before, as a self-preservation gambit following the 1572 St. Bartholomew's Day Massacre. Born and baptized as a Catholic, Henry was raised as a Protestant and even bore arms with the Huguenot forces during the mid-16th Century Wars of Religion.

But it wasn't until it became clear that embracing Catholicism was the price of securing the throne he inherited in 1584 that Henry IV was prompted to settle on one flavor of religious “conviction.” (His large retinue of illegitimate children demonstrated that his piety did little to inhibit his appetites.)

Flexibility of conviction is a consistent trait among politicians, but few have developed that trait to the extent that Henry IV did. Where cynical flexibility is concerned, Mitt Romney – whose lust to be president borders on the pornographic – might give Henry some stiff competition.

In recent days, citizens of the Blogosphere have passed along this video excerpt from Romney's Senate campaign against Ted Kennedy more than twelve years ago. The debate footage from an October 1994 displays Romney offering an impassioned, finger-thrusting defense of “safe” and legal abortion. He even plumbs the depths of pathos by invoking the death of a “close ... relative” from an illegal abortion, an event which apparently caused not only Romney but his mother, a one-time Senate candidate, to become deeply committed to the pro-abortion position.

Needless to say, as Romney has courted the unflinchingly anti-abortion Christian Right, he has employed the same acting school tricks to convey an impassioned commitment to the pro-life position.

The Boston Globe, which is having altogether too much fun underscoring Romney's hypocrisies (this is not to suggest, of course, that they should stop doing so), has pointed out that where in 1994 Romney “backed two gun-control measures strongly opposed by the National Rifle Association and other gun-rights groups,” he now “touts his work to ease restrictions on gun owners.”

“That's not going to make me the hero of the NRA,” Romney commented during the 1994 Senate campaign, referring to his support for the Brady Bill and a ban on so-called assault weapons. “I don't line up with the NRA,” he observed on another occasion during that race. Today, however, he proudly claims membership in the NRA (pshaw – if he really supported the right to armed self-defense, he'd offer to join Gun Owners of America – not that they'd take him) and recently put in face time at one of the nation's largest gun shows.

Clearly, John Kerry is not the only conspicuous member of the Bay State Mandarinate to whom flip-flopping comes naturally.

As the experiences of the Donner Party and Uruguay's national rugby team demonstrate, if someone gets hungry enough, he'll set aside nearly every moral inhibition to sate his appetite. Politicians, an exceptionally well-fed lot, generally know nothing of the primal desperation that prolonged physical hunger can inflict on otherwise civilized people – but they are well acquainted with cognate psychological appetites for power and money.

Even in such loathsome company, Mitt Romney distinguishes himself by his indecent hunger for the White House. And this may explain why he has taken to his bosom Mel Sembler, a squalid little pile of degeneracy for whom mere indecency would represent a monumental achievement in personal reform.

Months ago I took note of the fact that Romney, seeking the blessing of Evangelical Republicans leery of him because he's a Mormon, had made a point of expressing support for indefinite detention and torture of alleged terrorists.

As I commented then, it strikes me as perverse that a Mormon would endorse such official lawlessness, given that Mormons in the 19th Century were on the receiving end of some of the most notorious abuses of power in our nation's history. Likewise, I cannot see how anyone who worships Jesus of Nazareth as God Incarnate could countenance torture for any reason. And it is abhorrent to think that it is on this ground that professed Christians could find common cause with a Mormon presidential aspirant.

In the essay immediately following the one described above, I profiled Republican fundraiser Mel Sembler, a Florida shopping mall magnate who is considered an intimate friend of the Bush Crime Family. 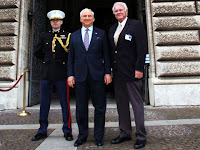 I published those essays back-to-back because I was confident that eventually these two would hook up. As it happens, Romney recently announced that Sembler will serve as one of his ten national fund-raisers.

Despite his prodigious fund-raising efforts on behalf of the GOP, Sembler helped raise money for Joe Lieberman's “independent” Senate campaign last fall. He is also head of the Lewis I. “Scooter” Libby Legal Defense Fund.

The trial of Libby, former chief of staff to Vice President Cheney, will begin on Tuesday. In addition to being a key architect of the Iraq war, Libby is accused of playing a pivotal role in the outing of CIA covert operative Valerie Plame, which was done to retaliate against her husband, Ambassador Joseph Wilson, an outspoken critic of the war. Even more importantly, Libby helped craft the detention and interrogation policies that led to creation of a global archipelago of CIA torture facilities.

Sembler clearly places prosecution of the war against “Islamo-Fascism,” and preservation of unaccountable executive power, at the top of his list of priorities. His support for one of those who crafted the Bush Regime's torture policies could be considered a form of professional courtesy.

Along with his wife, Sembler created the “Straight” behavioral modification program for youngsters with drug or alcohol addictions or considered to be “at risk” of developing the same. The Sembler-created “rehabilitation” network was based on programs and principles developed in a federally funded early 1970s enterprise called “The Seed,” which (according to a Senate Judiciary Committee investigation) used methods similar to the “highly refined `brainwashing' techniques employed by the North Koreans” against US prisoners of war.

“The Seed” was shut down in the mid-1970s, but Sembler's network (nine clinics in seven states) received funding from the same federal agencies that had underwritten the earlier Communist-derived program. Many of the teenagers put into Sembler's program complained of physical, emotional, psychological, and sexual abuse.

The program was shut down in 1993, but not before calving off similar efforts throughout the country and even abroad in Latin America and the Carribbean. Many of those programs are run by veterans of Straight; the ones operating abroad have quite literally made use of the same torture methods that became notorious at Abu Ghraib.

Many of the teenagers consigned to those facilities have no problem with drugs or alcohol, or any other self-destructive behaviors; nonetheless, they often are literally kidnapped from their homes (with the consent of parents terrified by lurid "War On Drugs" agitprop) and taken to a BM facility – sometimes abroad – and kept there until their thinking gets “straightened out.”

(The definitive research on this topic has been done by investigative author Maia Szalavitz; see her invaluable book Help At Any Cost for more details.)

Please indulge me as I repeat the summary at the end of my profile of Sembler:

“These BM programs are an outgrowth of the murderous fraud called the War on Drugs, and they developed and employed many of the methods of physical and psychological abuse now being used in the even more murderous fraud called the War on Terror. Sembler – a perverted little lump of arrogant corruption – is a human bridge connecting those two enterprises. And he's one of the most powerful figures at the highest echelon of the Grand Old (Torture) Party.

I see no reason to modify that assessment, except perhaps to add the critical detail that in the photogenic and apparently pious figure of Mitt Romney the most unregenerate element of the GOP elite may have found their ideal front man.

In this, as in so much else, The Bard nailed the truth flush to the plank centuries ago:

“The devil can cite Scripture for his purpose. An evil soul, producing holy witness, is like a villain with a smiling cheek; A goodly apple rotten at the heart; O, what a goodly outside falsehood hath!”

There's not a significant presidential political candidate, in either party, that you can point to that has less baggage then Romney. And as your blog post makes obvious, that's saying something.

Politics is relative. The public determines what the bounds of the acceptable spectrum of relative egregiousness vs. acceptability are. And they do so by choosing the degree of their own collective ethics and their own collective introspection and interest in the welfare of the nation and the world.

Romney is the least baggage laden of all viable contenders in view. One can face it or deny it.

i must disagree with you. ron paul is looking into running for president. ha has no baggage, and has for years said the same thing over and over. he has never flip flopped, and having brought over 4,000 souls into this world, i'm sure he's not the kind that enjoys making souls leave this realm...like some politicians have no qualm in doing.