The Soviet States of North America (Pt. I): Illegal Immigration -- The Problem is the State 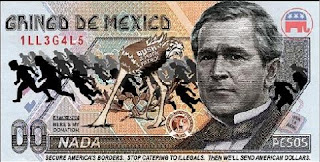 The single biggest problem our nation faces, an acquaintance commented recently, was the presence of “20 million illegals [who are] killing our economy and culture.... 20 million more with amnesty would be the end of any America I want to live in.”

Severe and growing problems have indeed resulted from the effective abolition of our borders – especially for U.S. Citizens living along our hypothetical southern border with Mexico, where many Americans are literally under siege.

But here's what left me puzzled about that fellow's assessment:

First, he opposes the minimum wage (as I do, because – among other reasons – the federal government has no constitutional authority to set prices for labor or anything else). This means he really can't indict Mexicans or others willing to work for a comparative pittance as the culprits in undermining the price of labor.

And while it's true that welfare transfer payments to immigrants, both legal and illegal, are doing considerable damage to our economy, they are getting plenty of help in the form of myriad pay-outs, hand-outs, subsidies, and other forms of official and plunder and bribery that are purely home-grown.

Secondly, while the idea that illegal immigrants are “killing ... our culture” has some limited merit as well, this is an odd complaint coming from this particular acquaintance of mine, who (to his credit) has taken great care to insulate himself and his family from a culture he considers to be ruined already.

He worships at an independent fundamentalist church. He and his wife have home-schooled their children, and (once again, to their credit) they don't have a television. He has little use for popular music (defined here as anything originally recorded on media more sophisticated than wax cylinders); indeed, he sometimes acts as if people who clap on the back-beat are Satan's Glee Club.

That our contemporary culture is a Stygian sewer is obvious. How this is related to the problem of illegal immigration is not.

True, the engineered influx of a large, undigested mass of people who speak different languages, follow different customs, and were raised in much different political traditions, has done a great deal to undermine our public culture.

But I contend that this reflects the fact that this is an engineered influx – one brought about by the elites controlling the State, for the purpose of expanding their power by undermining our old republican culture.

It's reasonable to believe that, absent such intervention – along with mandated bilingualism and other policies designed to trap immigrants in cultural and linguistic ghettos – our culture would be able to absorb new immigrants with much less difficulty. And it's likewise reasonable to believe that if our economy were freed from the burden of a huge and metastasizing welfare/warfare state, it could easily produce jobs at suitable wages for both immigrant and native-born workers.

The central problem here, as in practically everything else, is the fact that the State (institutionalized coercion in the hands of self-serving people) is at war with society. And America's society is not the first in which a corrupt Power Elite has used immigration in an attempt to “elect a new people.”

Murray Rothbard, who once supported an open borders view of immigration, has described why he revised his views of the matter:

I began to rethink my views on immigration when, as the Soviet Union collapsed, it became clear that ethnic Russians had been encouraged to flood into Estonia and Latvia in order to destroy the cultures and languages of these peoples,” Rothbard explained. After examining the matter in depth, he concluded that "the regime of open borders that exists de facto in the U.S. really amounts to a compulsory opening by the central state, the state in charge of all streets and public land areas, and does not genuinely reflect the wishes of the proprietors."

The “proprietors” referred to by Rothbard, the real owners of this country, are the productive people who create wealth in the private sector, and who seek to preserve the institutions of a free society. We have never given permission to the government to reconfigure our society in Soviet fashion, using engineered migrations to eradicate a shared language and culture and then replacing it with a statist pseudo-culture compatible with a totalitarian political order.

While not elaborating on the idea, I'd like to point out briefly that ours is not the first American civilization to face dispossession through engineered illegal immigration.

The Sioux Indians of the Black Hills were promised by Washington that their borders would remain secure in perpetuity. Those assurances proved to be as evanescent as a handful of snowflakes after a pathologically ambitious Union officer named Custer led an expedition in 1874 that discovered gold in the Black Hills -- and then eagerly abetted illegal immigration into Sioux lands. For the soon-to-be-dispossessed Sioux, scant comfort was found in Custer's demise a few years later.

... and as experienced by the Sioux.

One sobering lesson taught by the dark side of Manifest Destiny is that illegal immigration can be a very effective tool for those seeking to demolish societies and reduce them to servitude. I believe a related lesson is that those of us who want to avoid that fate should direct our efforts at combating the Power Elite that's seeking to do this right now -- the engineers of the envisioned North American Union, or as I prefer to call it, the Soviet States of North America. It is they, not the illegal immigrants themselves, who are "killing our economy and culture."


In part II, I'll look at a key element of that Power Elite -- interlocking crime families that are binding the U.S. and Mexico together at the expense of the peoples of both countries.

Please be sure to visit The Right Source, our regularly updated news and commentary page.
at 4:09 PM

It always struck me as rather "odd" that we'd constantly be meddling overseas with this and that all the while leaving the borders wide open and turning a blind eye... (speaking for our so called "leaders")

Actually it makes perfect sense, in an evil sort of way, if what you want to do is destroy a nation from the inside.

That our contemporary culture is a Stygian sewer is obvious. How this is related to the problem of illegal immigration is not.

Yes, and the State didn't make it that way! The State capitalizes on that state of mind, it does not create it. The people themselves have made it so, or otherwise allowed it to become so.

It's reasonable to believe that, absent such intervention – along with mandated bilingualism and other policies designed to trap immigrants in cultural and linguistic ghettos – our culture would be able to absorb new immigrants with much less difficulty. And it's likewise reasonable to believe that if our economy were freed from the burden of a huge and metastasizing welfare/warfare state, it could easily produce jobs at suitable wages for both immigrant and native-born workers.

Illegal immigration, as opposed to the state of the culture, may indeed be "engineered" to some extent, yes. Still, it is also capitalized upon and utilized to their benefit as you pointed out. Even so, for some elusive reason you keep thinking of "the State" and "the commoners" as totally unrelated entities and are so vastly disconnected that if "the State" was somehow controlled or put back on a leash, everything would just be hunky-dory. (LOL!)

Nonsense. I completely disagree. Once again, other than the minuscule "Power Elite" minority, the vast majority of people who fill government positions don't hail from another planet or secret societies, they come right out of us. If the aggregate commoners were not so "in love" with government (jobs, entitlements, etc.) to begin with and the people were made up of Crocketts, Washingtons, Madisons, or Jeffersons, the State wouldn't be able to "engineer" these schemes so easily. Alas, there are way too few of those kinds of characters and minds amongst us, Will.

Let me try to "connect some dots" to make the connection I alluded to more apparent:

2.) Government has been chosen by the people as their de facto arbiter in all critical matters. You hear people saying "There should be a law..." or "I'm gonna sue...," etc. All involve the government bureaucracy to force or mandate an action, inaction, or the government court system to arbitrate and referee.

3.) Entitlements ate up 54% of federal spending in 2005. Entitlements are consumed by the private sector and private citizens as well as by the state and local public sectors and state and local public officials. Social Security is the largest entitlement, while Medicare is growing the fastest. Both of those drinks are consumed by private citizens. Many drink heartily and greedily from the public trough.

Remember Will, Hitler was voted into power by the commoner; he did not perpetrate or "engineer" a surprise coup d'etat.

I think you might be reading too much into your friend's comments. It is true that 20 million illegals are having a devastating effect on our economy. While the illegals aren't totally to blame for the problem (as you point out), nevertheless they are a necessary part of the equation.

I've come to the conclusion that competitive free enterprise and free-trade works best with a well-developed economy and workforce. Much of the welfare and regulatory state could be abolished in a country where labor is relatively scarce, since there would be market incentives to address the needs and concerns of workers. But it is when millions of dirt poor people are injected into an economy that there is the so-called "race to the bottom" that the left falsely attributes to all capitalism.

As for the cultural component of illegal immigration, a recent realization depressed me: We often complain about Hispanic assimilation, but WHAT ARE THESE PEOPLE ASSIMULATING TO? Based on the gang membership rates, out-of-wedlock birthrates, and so on within the Hispanic community, it appears that they are assimilating into same rotten culture that most of the world associates with America. In many respects, it is worse if they assimulate!

With so little cultural glue of any moral merit holding America together, I don't see how she will survive the various forces pulling it apart.

Is our depraved, sensate culture merely the outgrowth of natural social causes unrelated to any nefarious top-down intrigue? No, on the contrary, the Gramscian Marxist model for social control through cultural subversion, the "long march through the institutions", is a well-honed dystopian blueprint. By first capturing its cultural institutions, Gramscian strategists will then be positioned to easily subvert the targeted nation's political institutions. In fact, the targeted government will fall effortlessly into their hands, and the people, having been conditioned to love their slavery, will embrace the political changes. Aspiring tyrants employing the Gramscian strategy in their quest to create the omnipotent and ubiquitous State will eventually wear down a targeted populace, taking full advantage of human psychological and axiological weaknesses. The masses are at a distinct disadvantage, for they cannot perceive nor understand the organized forces arrayed against them. Add to that the fallible condition of the human psyche and its susceptibility to base instincts, and we commoners become as malleable as silly putty in the hands of our Skinnerian molders. We as individuals who make up the national collective do bear much responsibility for the current cultural malaise. However, the semi-submerged power elite who have greased the skids via Gramscian subversion are guilty of the greater sin.

We're getting ready to start up a new illegal immigration blogburst. If you're interested shoot me an email and I'll get you the info.