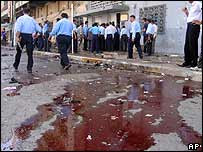 Every other rationale for continuing the occupation of Iraq having failed, supporters of the war have taken refuge in what they believe to be an invincible thought-stopper: Iraq differs from Vietnam, because this time the enemy will “follow us home.”

Of course they did.


Haven't we been told by the administration that on 9-11 the Middle East “came home to us”?

Like most defenders of the Iraq War, McCain was simply spitting out words to watch them splatter. He's intelligent enough to know that he was making absolutely no sense.


The same is true of Republican congressman Mario Diaz-Balart, who regurgitated the same line during a visit to Naples, Florida last Sunday. As one press account reported, Diaz-Balart told his audience: “The war in Iraq cannot be compared to the long-fought Vietnam War, [because the] Vietnamese weren’t inclined to follow Americans home nor to attack on U.S. Homeland....”

The ranks of the Bu'ushist right, however, are filled with people just as dishonest as McCain and Diaz-Balart. Some of them – free-range chickenhawks like Rush Limbaugh – are smart enough to know that they're retailing a lie. Others are apparently too stupid to realize what they're doing. One useful example of the latter is neo-con slogan-slinger Frank Salvato, who offers this recitation of the Regime's official “follow us home” meme:

“In today's conflict we don't have the luxury of simply leaving and declaring victory. This time our enemy – radical Islamists who employ terrorism as their chief military tactic – want us all to convert to Islam, live under Sharia Law or die.... This time, the enemy won't be satisfied with our soldiers simply leaving the battlefield. This time the enemy is going to follow us home.”

The instrument has yet to be invented that can measure the infinitesimally small odds that the Islamists could impose Sharia Law on the United States. A much more plausible domestic outgrowth of the Iraq war – unless we end the occupation immediately and begin to repair the damage it has done to our institutions here at home – would be an epidemic of urban terrorism here at home carried out not by savagely bearded foreign Muslims, but by disaffected veterans of the war who put to use the tactics they learned from the enemy in Iraq.

Military analyst William S. Lind refers to this as the “Boomerang Effect”:

“One of the things U.S. troops are learning in Iraq is how people with little training and few resources can fight a state. Most American troops will see this within the framework of counterinsurgency. But a minority will apply their new-found knowledge in a very different way. After they return to the U.S. and leave the military, they will take what they learned in Iraq back to the inner cities, to the ethnic groups, gangs, and other alternate loyalties they left when they joined the service. There, they will put their new knowledge to work, in wars with each other and wars against the American state. It will not be long before we see police squad cars getting hit with IEDs and other techniques employed by Iraqi insurgents, right here in the streets of American cities.”

It's worth recalling that the deadliest pre-9-11 terror attack within the US was carried out by a disaffected veteran of the first Gulf War, an Army tank operator named Timothy McVeigh.

Yes, there is intriguing evidence that McVeigh found allies among Islamist elements within the United States, including transplanted members of the Iraqi Republican Guard.

And yes, video footage has emerged suggesting that McVeigh was receiving training from the Army in explosives and demolitions subsequent to his reported discharge date; this would lend credence to at least some of the theories in which McVeigh was a “patsy” or provocateur.


All of this, if true, actually fortifies the point I'm making, since present conditions are quite similar to – and in some ways, worse than – those that led to the 1995 OKC bombing.


The longer we remain mired in Mesopotamia, the larger will be the population of proto-McVeighs among those consigned to occupation duty there. And not all of them would be drawn from among the White Supremacist demimonde.

Muhammad, in turn, was wired in to a domestic gang underworld that has become organically attached to the military.

As Stars and Stripes reported last December, street gangs of various flavors – including Chicago's Gangster Disciple Nation (which has helped broker federal subsidies to urban gangs across the nation, and whose leadership encourages members to enlist) – “have gained a foothold in the U.S. Military and are using overseas deployments to spread tentacles around the globe....”

Gangster Disciple graffiti can be found on armored vehicles, concrete barricades, and various buildings in Iraq. There are indications that the paramilitary Salvadoran MS-13 gang is actively recruiting among children of military personnel in Europe, and it's reasonable to believe that MS-13 and other Latino gangs could find adherents among non-citizen recruits eager to use military service to acquire citizenship.

In some form or another, the war will follow us home. That's one of the unavoidable consequences of waging demented wars of aggression. When the IEDs start going off in our inner cities, chances are we won't have the Mohammedans to blame.

Immigration reform activist Terry Graham has asked me to pass along an urgent appeal for my readers to call their Republican elected representatives and demand that they vote against Mel Martinez's nomination to be General Chairman of the Republican National Committee. That spurious post was created in 1983 to accommodate the appointment of former Nevada Governor Paul Laxalt, a good friend of Ronald Reagan. Martinez is similarly chummy with Bush the Younger, and shares the Bushling's enthusiasm to extend amnesty to illegal immigrants.

Congratulations. Its a nice blog you are keeping here. Keep it up and all the best.If you have some time, do check my blog and don't forget to leave a little comment for me while you are there.

I am less convinced that the fact that our soldiers are abroad killing foreigners in a war of aggression will come home killers than I am convinced that those they imprison and the relatives of those killed or maimed will nurse a long-standing sense of vengeance against the United States.

It's not unlike our first "war on terror" back in 1919-20, where a dragnet was sent out against communists, and ensnared mostly innocent people. The liberal Democratic Montana Senator Thomas J. Walsh correctly concluded back then that "The indignities and outrages suffered by the victims, the majority of whome were released, will rankle in their breasts until their dying day, and their friends and relatives will share with them the conviction that justice 'for a season bade the world farewell.'"

We're breeding more terrorism by nursing a justifiable and understandable sense of grievance in the Middle East.

Yep. I even alluded to this back in your It's a Droog's World, After All comment thread:

And about the cameraman laughing at the carnage as if it's a video game, I certainly deduce from this how a seemingly endless imperial war can eventually create prime candidates for mass-murder upon their return, either at the States disposal or their own psychotic reasons. That is, IF they physically survive. Mentally, however, is obviously another matter entirely.

It would seem to me that there should indeed be some concern for how much discontent and anger, that inevitably follow wars of aggression, the combat vets may harbor upon their return. Given our accelerating cultural devolution along with the imperial war machine grinding onwards, we could indeed see the "war coming home" in a literal sense.

The Vietnam War, Korean War, and other past imperial conflicts of the post-WWII era also had vets harboring discontent and anger. The difference, however, is that the culture (even among the youth) still held, for the most part, to a Judeo-Christian value system and worldview, or at the very least a semblance thereof.

Today, unfortunately, that's most certainly not the case.

You're certainly on top of things over here! I was very much pleased to read your points pertaining to McVeigh, as I too have brought up his name in the past in regards to the seeds being planted within those who come back from this horror to a life of long lines, red tape and broken promises...the life of a veteran.

I'm breaking away to find the piece in particular, because I feel it is so important to document the extent to which our insulated lives in bulk here in the USA tend to fight off recent history much more effectively than we do the common cold...

"The exploitation of our soldiers is what needs to be hollered about from coast to coast at the top of our lungs. The way it will probably be brought to everyone’s attention though is when some of these people who our government’s used and tossed out with the garbage start realizing what was done to them and get to feeling that Tim McVeigh wasn’t such a crazy guy after all. Say what you want about monster he was, we were all sure as hell listening to what he had to say after he blew it up, didn’t we? We were captivated by the interviews, and even though any rational person would see him as scum, what drove him crazy was right there for all of us to see, only it wasn’t us, so nobody cared. The same dynamic causing our apathetic view of the plight of these soldiers was how we all most likely viewed Ruby Ridge and the government’s denial of Gulf War Syndrome.

After this war all bets are off. Get ready for it everyone, because unless these soldiers find themselves an advocate anytime soon, their lives are over whether they survive the war or not. If you’re putting your politics in front of the lives of those you claim to care about today, you could become one of their victims tomorrow." http://deadissue.com - 7/7/04 http://deadissue.com/archives/2004/07/07/what-about-the-troops/#more-16

There are more, but you get the idea...I've believed in this future we're about to begin realizing for quite a while now, and part of me honestly thinks our society will shake it off, regardless of how many end up going this route...

The "follow us home" mantra can be equated with hundreds (probably thousands) of bunk examples of jibberish leaders in the past have spouted to justify war...Europe most likely has enough in the mast millenia to explain just about everything behind what we've heard about this war since the beginning.

I honestly believe that once the adjectives and venacular are removed, and the motives are boiled down to their base elements, our occupation in Iraq is a carbon copy of so many other instances in human history, that all of our (not meaning you and I...I'm talking about the hoopleheads) words are nothing more than entertainment and delusion.

I'll be proud of the soldier who comes back and decides to go out with a bang depending on the who/what/when/why...of course, that'll be too much to expect, and instead it'll be women and children and workers and television ratings...