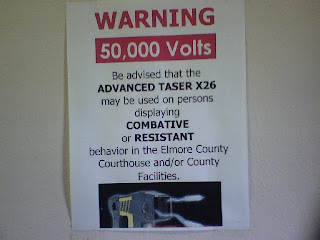 Of course, what they don't tell you is that "combative or resistant behavior" can include a word, glance, or momentary hesitation that a State-employed thug doesn't like.


I know little about the political views of the Rev. Lennox Yearwood of the "Hip Hop Caucus," and I care even less. For all I know he is a devoted left-wing agitator who keeps a copy of Marx's 18th Brumaire, or perhaps Carlos Marighella's Mini-Manual for the Urban Guerrilla, concealed within the covers of his Bible.

What I do know, from the video below and eyewitness testimony, is that Rev. Yearwood, a U.S. citizen, waited patiently and peacefully in line to be part of the audience at a public congressional hearing, and was denied access while others behind him in the queue were admitted. I know that this was done because a strict and patently unconstitutional quota was imposed by Rep. Ike Skelton (D-Missouri), the presiding chairman, on "peace people" in the audience.

And it's clear from the video below that Yearwood did nothing to justify his arrest, let alone being the victim of an act of gang violence by a pack of cowards in uniform who promptly charged him with "assault on a police officer":

Spectacles of this sort offer what I call a "shibboleth/sibbolet" bright-line test of one's principles and moral orientation: When you see a group of six large armed "men" swarming an unarmed, peaceful person, whose side do you take?

This wasn't the street arrest of Rodney King following a high-speed pursuit that put innocent lives at risk. Whatever one thinks of that notorious episode from a decade and a half ago, it was a manifestly different thing from what we see in the video above.

This incident brings to the forefront a point I have made before: "Resisting arrest" should not be a crime. Indeed, for much of our nation's history it was considered perfectly legal and appropriate for a citizen to resist arrest -- to the point of using lethal violence, if necessary -- where probable cause didn't exist.

As attorney Roger Roots points out in an essay published by the Seton Hall Constitutional Law Journal:

"Under the common law, there was no difference whatsoever between the privileges, immunities, and powers of constables and those of private citizens. Constables were literally and figuratively clothed in the same garments as everyone else and faced the same liabilities — civil and criminal — as everyone else under identical circumstances.... Nothing illustrates the modern disparity between the rights and powers of police and citizen as much as the modern law of resisting arrest. At the time of the nation's founding, any citizen was privileged to resist arrest if, for example, probable cause for arrest did not exist or the arresting person could not produce a valid arrest warrant where one was needed. As recently as one hundred years ago, but with a tone that seems as if from some other, more distant age, the United States Supreme Court held that it was permissible (or at least defensible) to shoot an officer who displays a gun with intent to commit a warrantless arrest based on insufficient cause. Officers who executed an arrest without proper warrant were themselves considered trespassers, and any trespassee had a right to violently resist (or even assault and batter) an officer to evade such arrest."

This is exactly how it should be.

If resistance is put up by a legitimate criminal suspect, he's doing pretty much what we expect him to. If it is offered by a genuinely innocent person, it's not a crime of any sort, merely the understandable and quite commendable act of a free person exercising his God-given right to self-defense against the single biggest threat to life and individual liberty we confront: The State's armed agents of coercion.

Yet it's not uncommon for people to be arrested for resisting arrest; this reminds me of the East German government's practice of suppressing the speech of those who accused that regime of suppressing free speech.

And we've reached a point in our descent into despotism where the mere act of "resistant" physical contact between a civilian and a State-employed thug wearing a gun and body armor is prosecuted as felony assault.

As agents of the State, the police are literally untouchable -- licensed to dispense violence at whim, and empowered to treat any resistance by word or gesture as an attack. 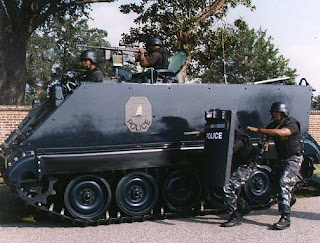 These guys can kick in your door, kill your pets, trash your home, throw you to the floor and put a boot on your neck, and kill you with impunity -- but if you utter a syllable of protest you can be prosecuted for "assaulting an officer."


In the incident displayed above, it was the "assailant" who ended up, however briefly, beneath a crushing, suffocating scrum of armed goons (reportedly suffering a broken leg ). The only contact that occurred took place when the armed hirelings grabbed Rev. Yearwood, tackled him to the floor, and then piled on top of him, thus displaying the sacrificial courage for which our constabulary is famous in the era of the Homeland Security State.

Note as well how at least one of the heroes did what he could to impede the view of the witness who was recording the assault.

The District of Columbia ordinance under which Rev. Yearwood has been charged offers five elements of the offense of "assault on [a] police officer," the second of which is that the defendant "assaulted" -- well, duh; a tautology is always so helpful -- "resisted, opposed, impeded, intimidated, or interfered with" an officer.

Under that language, Rev. Yearwood was liable to be charged with "assault" merely for demanding an explanation from the police who denied him access to the committee room, or for exclaiming "I won't be arrested today!" as the officers moved to take him into custody.

Some might contend that this kind of treatment is exceptional, given that the assailants were the Capitol Police and that security standards are necessarily higher on Capitol Hill. But Rev. Yearwood's exclusion was apparently not based on security concerns; it was dictated entirely by his political views.

And it's worth noting that one of the assailants told Yearwood he was being arrested for "defying an officer's order" -- the kind of spurious charge routinely used to justify arrests not only in Mordor-on-the-Potomac, but elsewhere across this once-relatively-free land.

What could be a better illustration of the reality that we live in a regimented, militarized police state -- patrolled by armed enforcers, rather than peace officers -- than the fact that any citizen can be arrested anytime for refusing to follow "an officer's order"?

Assault victim Lennox Yearwood gives an account of the crime committed against him by rented thugs at the U.S. Capitol:

Be sure to check out The Right Source, and listen to the latest Liberty Minute commentary.
at 9:30 AM

There was no "assault" in that video. If the pastor punched the officer in the face, that would have been assault. I think (or at least hope) the assault charges will be dropped as we have a video contradicting the officers. As far as resisting arrest, I think if you are outside your home you should not be allowed to use lethal force in resisting arrest. However, resisting should not be a crime unless there is some additional charge, methinks. If the charges a suspect are being arrested for are dropped, or if the charges are a malum prohibitum (in the dream world), no additional resisting charges stick unless the resistance was deadly or maiming.

And have you noticed how the term "cop killer" is used to label anybody who, for whatever reason, has killed a cop - like killing a cop is somehow a worse evil than killing a mere citizen. And when cops are killed, even due to their own stupidity, like wrecking their cruiser or some such, there has to be a STATE funeral, with cops coming from all over the STATE to attend the event, all on our time and out dime. Yes, some are better than others. And cops like to keep the rest of us thinking they are better

I certainly hope he sues those cops AND their superiors.

There was clearly no wrongdoing on this guy's part. He had a right to be there, he was treated wrongly, and he spoke up about it.

This kind of police behavior should be punished ESPECIALLY when it occurs in public buildings where citizens are trying to address their government.