Don't you just love it when a soft-handed, soft-bodied, lisping, chinless neo-con nebbish like Thomas Friedman gets all butch?

"We hit Iraq because we could," concludes the Stone Cold Steve Austin of the New York Times op-ed page, who establishes his bad-ass bona fides by exclaiming, "Well, suck on this!"

That defiant challenge to the Iraqi insurgency and the Muslim world at large was issued from the comfort of a soundstage on the Eastern Seaboard. It's of a piece with the faux machismo of the Imperial Dim-Wit in the Oval Office, whose most notable pronouncements regarding Iraq are "Bring it on!" and "We're kicking ass."

Not for the likes of Thomas Friedman are the actual terrors of the battlefield; such chores are not assigned to members of the Cognitive Elite. Instead, he gets to prance around the world on a bottomless expense account, collecting anecdotes to feed into whatever mechanism he possesses that extrudes the banalities he ends up publishing between book covers.

Meanwhile, as Friedman himself put it, "boys and girls [are] going house-to-house from Basra to Baghdad" carrying out the needless, pointless, useless war Friedman now justifies by displaying his dubious and implausible grasp of streetfighter patois. (By the way, what kind of macho man sends girls out to fight wars?)

So the whole point of invading Iraq was to show we could do it -- to "burst the bubble" of post-9/11 Arab confidence. The occupation would over-awe the Muslim world and leave it pliant, tranquil, subservient to Washington's whims, from Friedman's perspective.

And how's that workin' out for ya?

Make no mistake: Friedman is a bully -- albeit one who outsources the actual bullying to more physically accomplished people -- and the foreign policy he supports as a "public intellectual" is bullying writ large.

In fact, all the Establishment Right has left is the desperate, erratic bellicosity of a bully in irreversible decline. And that trait has come to define how most of the world sees our nation.

Wilt Chamberlain -- whose plentiful allotment of flaws did not include a bullying disposition --once lamented that nobody roots for Goliath. The Bard captured another facet of the same truth: "'Tis excellent to have a giant's strength, but it's tyrannous to use it like a giant."

Six years ago, the United States learned that, despite decades of quasi-imperialist global meddling, we were still respected and even loved in much of the world. The day after Black Tuesday Queen Elizabeth instructed the Coldstream Guards to play "The Star-Spangled Banner," a gesture the memory of which even now brings tears to my eyes.

"We Are All Americans," proclaimed a banner headline in France's leading newspaper. That headline expressed an outpouring of sympathy soon to be repaid by snide, untutored digs at French valor and national pride from the likes of Jonah "The Pantload" Goldberg, who also dissed Canada as a girly-man country. A large and expanding carbohydrate sculpture whose gelatinous form threatens to become a quantum singularity, Goldberg would load his pants with used food were he to find himself in a fist-fight, let alone a fire-fight.

In the wake of 9-11, expressions of support and sympathy for America were found on the streets of Tehran. And the regime ruling the unfortunate Iranians actually offered to sit down with the Bush administration and hold open-ended discussions on all of the long-standing disputes and conflicts between our nations. The Bu'ushists didn't deign to reply to that initiative. And now the Regime in Washington is working frantically to concoct an excuse to attack Iran, with a nuclear strike conspicuously left "on the table" as an option.

Around the world, people who once admired and respected the United States are now disgusted with us because we have permitted our government to launch and prolong an unjust, aggressive, bullying war against a country that never threatened us and couldn't defend itself.

"Well, it's better to be feared than loved," retort the mock-macho pundits on the GOP-dominated Right.

We're neither loved nor feared, as much as our government understandably alarms much of the world. The preponderant sentiment is one of contempt, particularly among most of the Muslim population whose "bubble" Friedman seems to think we've burst.

Nobody likes, let alone admires, a bully. Those who cower behind a bully -- the Friedmans and Goldbergs of the world, along with the Sean Hannitys, Bill O'Reillys, and countless lesser specimens of the same despicable breed -- seek vicarious vindication as Men Not To Be Messed With. And when one bully is defeated, those who followed in his wake will simply attach themselves to another.

Poised to make a comeback: A post-WWI German propaganda poster depicts the "stab-in-the-back" myth, a version of which will likely become a political fixture in the post-George W. Bush era (see below).

Now that the Swaggering Fool is a spent force, the bully-boy right is taking a long look at Rudy Giuliani, the GOP's Count Orlov. But then the GOP might consider losing the White House next November as a strategic advantage, since the winner -- most likely Madame Hillary -- would have to deal with the unfolding debacle in the Middle East. This would give time for the "Stab-in-the-back" narrative to percolate through the ranks of the right, eventually creating a movement that would fall into ranks behind the Sainted One, the All-Knowing Pillar of Military Integrity and Strategic Genius David Petraeus. Let no one take his name in vain! (Except, of course, for CENTCOM C-in-C Adm. William Fallon, whose assessment of Petraeus strikes me as sound.) 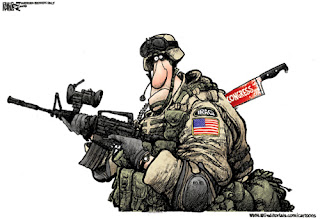 Already, as Justin Raimondo points out, Saint Petraeus has started to hear "Hail To The Chief" in his head whenever he enters a room. He has gazed longingly into the mirror and seen a President staring back, perhaps one sitting astride the proverbial white horse.

What is "The Man on Horseback," after all, but the incarnation of bully-centric politics?

_______________
*This essay revisits themes touched on in an essay I published a year ago, shortly before losing my job at The New American.


Please drop by The Right Source -- and listen to the Liberty Minute commentaries, which are now syndicated nation-wide with The American View.
at 9:20 PM

As soon as you lost your job with The New American, they lost my subscription. I also wrote TNA a letter informing them that they had become exactly what Birchers were supposedly against: compromising with the incorrect rationalization -- from both a moral and practical standpoint -- that the ends justify the means.

I am happy to see that you have a book on the way and I can't wait to read it, as I enjoyed Global Gun Grab a great deal. Christian paleo-libertarian writers are indeed rare, so it is refreshing to see your contributions on such a regular basis.

By the way, The New American has really "Run Amok," wouldn't you say? That last line should tell you how long I have been a fan. Keep up the outstanding work with the blog, Mr Grigg.

It always funny to see how the purpose and goals of this war of aggression are always changing in the minds of the devout. Can't hit a moving target.

CFR toady Friedman stole that line ("suck on this") from Travis Binkle, Robert DeNiro's skinhead nutcase character in the movie Taxi Driver. How ironic that Binkle is perhaps one of Friedman's closet heroes.

I was with you until your disparaging remarks against 'carbohydrate sculptures'. What's with all the caustic comments against us jello bodies? So who's the bully now? You big meanie. Just couldn't wait to comment about it, could ya? You know it hurts. We do have feelings (sniff). We have FEELINGS.

Is it just me, or does Friedman remind one of Ellsworth Toohey of Rand fiction fame?

I just watched Friedman on your video link, and he seems extremely homosexual to me, like one of those groveling, concentration camp capos you'd read about in holocaust literature. To borrow Seinfeld's expression, I'm not saying that there's anything wrong with that, it's just an observation. Maybe Friedman, Judy Giuliani, GOP "poster" boy Matt Sanchez and any quasi-male member of the inbred Bush/Walker family should hook up. You know, to discuss politics and whatever else may come natural, or not so natural.

Thanks for the kind words, and I'll let you know when "Liberty In Eclipse" is available.

And if I take your meaning, it seems that TNA ran out RunAmok, n'est-ce pas? :-)

Anonymous (1)-- Owing to the disruption of my schedule this summer on account of Korrin's long hospitalization, I'm not exactly "twisted steel and sex appeal" myself. Working full-time while being a single parent to five kids doesn't leave a whole lot of time for working out, and working at a computer station all day ain't exactly like throwing hay bales.

What I'm saying, I guess, is ... I, too, am burdened with excess adipose tissue. So I guess I'm a hypocrite.

That said ... I still drop to the floor and do 100 pushups first thing in the morning, which ain't bad for a flabby guy of 44 with a desk job.

Al -- Toohey's a good pick for Friedman's alter ego. If he were given a bureaucratic sinecure, Friedman would make a great Wesley Mouch.

"Bring it on!" and "Because we can" has gradually been replaced with the seemingly practical but equally foolish argument "If you break it it's yours". All are variations on the insane theme that whether through blunder or political design "America shall have dominion over the earth".
As Jacob Horberger correctly pointed out in a recent article, accidentally breaking an item in a store doesn't provide a customer with the moral right to violently take over the property and impose rules while attempting to repair the damage. One is simply expected to pay for the ruined merchandise.

When you break something at Pottery Barn, they don't make you store manager...

I can't help thinking of Matt Taibbi's descriptio of Tucker Carlson. Carlson, he said, serves the same function for liberals that Alan Colmes does for conservatives: the softest, tweediest post-Marxist English professor at Brown University takes one look at him on TV and says, "I could stomp the shit out of him in a fight."