Briefly Considered: Scrimp and Save, Make Your Payments ... And Lose Your Home Anyway 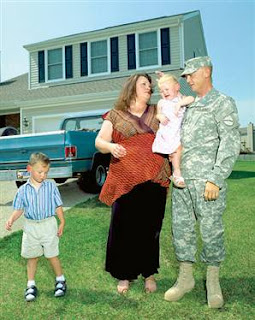 We're going to see a lot more of this: Iraq War vet Shawn Howell worked two jobs but still couldn't keep up with his ARM payments and had to sell the house to avoid foreclosure. Thousands of families who made payments on time stand to lose their homes as their mortgage lenders go bankrupt.


Just for a minute imagine that you're a thrifty, responsible homeowner. Unlike many people, you've been conscientious in protecting your credit. Your mortgage payments have always been on time, and your property tax payments have been made through the mortgage company. With price inflation steadily worsening and your household income remaining stagnant, things are tight but manageable.

But then your mortgage lender goes bankrupt after being mortally wounded by the bursting housing bubble. As a result, the property tax checks issued by the lender start to bounce -- and now you stand to lose your home to tax foreclosure as a result.

This is the situation facing thousands of home "owners" whose mortgages were financed through American Home Mortgage Corporation Inc. (AHMC), which filed for bankruptcy in August. Like most mortgage companies, AHMC issued thousands of loans backed by Freddie Mac and Ginnie Mae, which are "government-sponsored" lending agencies.

When the company filed for bankruptcy, AHMC's corporate leaders hoped to auction its loans to other private investors in order to raise money to pay its creditors. But just before the company went under on August 6, Freddie Mac obtained a judicial order permitting it to seize the files on some 4,547 mortgage loans, as well as $7 million in escrowed "custodial account funds" that had been sent by home "owners" for mortgage, insurance, and property tax payments. A subsequent agreement between AHMC and Freddie Mac allows the mortgage company to continue "servicing a crucial portfolio of $5.2 billion in government-backed mortgage loans," which is just fine for both parties in that arrangement.

Meanwhile, thousands of home "owners" face economic ruin. Late mortgage insurance payments will cause their premiums to skyrocket. Late tax payments will result in late fees and penalties. The Wall Street Journal (sub. required -- but see here) reports that "Thousands of homeowners face an `imminent risk' of losing their homes" because property taxes are going unpaid."

With the clinical detachment to human suffering that typifies the bureaucratic mind, Freddie Mac's commissars note that while the agency remains in control of the contested mortgage loans, it can't sort out the details to make the required insurance and tax payments. "Therefore, there is the imminent risk that borrowers' insurance policies may lapse for nonpayment, subjecting the borrowers to a risk of loss of their mortgaged properties," observed a statement from the agency. Likewise, the non-payment of property taxes will result "in increased tax liabilities and possible tax-foreclosure sales."

Some of the affected home "owners" are fortunate enough to live in counties with relatively accommodating treasurers. A dozen residents of Frederick County, Maryland, for instance, have been told that they can make partial tax payments until the checks arrive from AHMC. As if they would.

Freddie Mac's corporate motto asserts that the federally-created agency "makes home possible." The agency boasts of financing some 50 million homes since 1970. I have no idea how many American households today have been "helped" by Freddie: In my home state of Idaho, one of the more thinly populated states of the Union, Freddie has helped to finance over 160,000 homes over the last ten years. (.pdf)

Given the extent of Freddie's entanglement in the housing market, it's reasonable to believe that the predicament faced by the 4,547 households caught in the AHMC bankruptcy is just a foretaste of sorrows to come.

Make sure to drop by The Right Source and to check out the Liberty Minute archives.
at 10:11 AM

I was not aware this could actually happen. If I were I would have opted to pay my real estate taxes directly instead of having them escrowed with my mortgage company. Very scary.

I actually encountered something similar. My prior mortgage company made a clerical error in the check to the county, it took months to resolve, and I was getting delinquent tax notices in the interim. Finally, a replacement check was issued. I have since changed lenders, but elect to pay the taxes myself.

One note, I always understood that if you had the mortgage company pay your taxes, that part of your mortgage bill reserved for taxes, is supposed to be escrowed (held in trust) so regardless of the solvency of your lender, those monies are NOT to be touched. They never should be in a general operating pool (or your lender)to begin with.

Will, why do you think that Freddie Mac will face the same sort of financial difficulties as AHMC? You don't really state why. AHMC made lots of questionable loans, either the so-called 'sub-prime' loans (which I think means that they lent to people who really could not afford the payments) or loans to people made without checking the income documents that were provided. Sometimes AHMC simply took people at their word.

Such actions are financially quite risky, and AHMC is paying the price as are, apparently, many homeowners. But it is not at all clear that Freddie Mac had the same practices, though it's hard to be sure, as it seems to me that Freddie Mac is rather secretive (not compatible with its semi-governmental role).

Henry -- Fannie and Freddie are WORSE than AHMC, because of the assumption (inaccurate, as it turns out) that those lenders are backed by the "full faith and credit" (pause here for derisive, heart-attack laughter) of the federal government.

Just a few years ago, Fannie and Freddie suffered an Enron-style stock meltdown because they were engaged in exactly the same kind fraudulent bookkeeping, on a much larger scale. They were doing long ago what major lenders like AHMC have been doing more recently, and with far greater market exposure.

It wouldn't surprise me at all to see Freddie's behavior toward AHMC and its clients replicated many times over in the coming years. I could be wrong. I earnestly hope I am.