UPDATED -- Briefly Considered: Gen. Petraeus -- US Security Not An "Objective" in Iraq 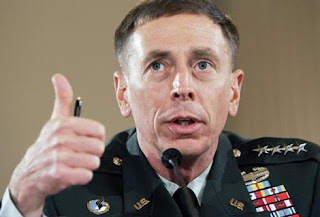 [The following transcribed excerpts have been updated and corrected from the first version, thanks to a suggestion from a reader -- WNG.]

Senator John Warner: "[I]f we continue what you have laid before the Congress here as a strategy [to continue the war in Iraq], do you feel that that is making America safer?"

General David Petraeus: "Sir, I believe this is indeed the best course of action to achieve our objectives in Iraq."

Warner: "Does that make America safer?"

Petraeus: "Sir, I, I don't know, actually. I have not sat down and sorted in my own mind. What I have focused on, and been riveted on, is how to accomplish the mission...."

Notes David Corn of The Nation: "Warner did not press the general any further on this point. The senator's time was up. That was quite a statement from the fellow who is supposed to save Bush's war. He advocates pursuing Bush's course of action in Iraq but he cannot attest that this effort is crucial for America's safety. Is that being a good soldier?"

Bear in mind that David Petraeus -- the Bush Regime's military messiah du jour -- wasn't in danger of a perjury charge, since the Regime refused to permit the General to testify under oath. (This is standard operating procedure for the Bu'ushists, incidentally.) Yet even under those conditions, Petraeus wasn't willing to claim that the continuing "war of choice" in Iraq is making the United States safer and more secure.

The unalloyed truth is that the war is radically undermining our national security:

*It has abetted the growth of Jihadist radicalism;
*It has provided Jihadis-in-training with an invaluable training ground;
*It is rapidly depleting our wealth (the plunder of domestic wealth through taxes and inflation is the chief war aim of any regime, of course);
*The Regime's ineptly disguised grab for Middle East energy resources has provoked the creation of new and potentially dangerous anti-US coalitions -- something that may lead to a painful illustration of how subjects inevitably get the worst of fights their rulers pick on their behalf;
*It has left the military depleted and over-committed -- a good thing, in the sense that an overtaxed military is less suitable as an instrument of domestic tyranny, a bad thing in the event the coalitions referred to above decide they want a piece of us. 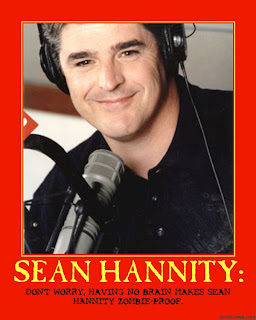 
Outside of the ranks of those who have succumbed to the self-inflicted handicap called "Hannitization" -- you know, mouth-breathing neo-Brownshirts of the sort gathered today for the last of this year's Cornpone Nuremberg Rallies -- nobody believes that the Iraq war is anything other than a world-historic strategic catastrophe. Only a few have the honesty and character to admit as much, and urge an end to the needless bloodshed. The rest are willing to abide additional thousands of deaths in order to save the prestige of the Regime that led our nation into this disaster.

Well, thanks to Gen. Petraeus, we now have a perfect argument to throw in the face of anyone who's willing to listen:

By the tacit admission of the general in command, the war has nothing to do with the safety and security of the United States.

So ending the war is not a defeat.

Four years ago, as noted in this story from the utterly indispensable McClatchy Newspapers service (the only wire service that specializes in journalism, rather than stenography, where the Iraq war is concerned), Gen. Petraeus was willing to express open skepticism regarding the wisdom of, and strategy behind, the invasion of Iraq. Today, as our military desperately tries to tread quicksand, Petraeus is choking down the key questions he was willing to ask back then, if only in rhetorical fashion.

At yesterday's Capitol Hill hearing, "there was one question that Army Gen. David Petraeus, the top U.S. military commander in Iraq, and Ryan Crocker, the U.S. ambassador in Baghdad, couldn't, or wouldn't, answer. It was the question that Petraeus himself posed rhetorically back in 2003 when he led the Army's 101st Airborne Division into Iraq: `Tell me how this ends.'"

As noted above, that wasn't the only question Petraeus (and Crocker, who may as well have been an animatronic mannequin) refused to answer. The combination of the two ducked questions leaves us with this: The military in Iraq is pursuing a course unrelated to our national security, under civilian and military leadership with no idea of how to end the war.

This time I mean it! My new book, Liberty In Eclipse: The War on Terror and the Rise of the Homeland Security State, is about to go to press. I'll let you know as soon as it's available.

Meanwhile, I'm about three chapters into my contribution to another book project (I just finished the draft of a chapter today), about which I'll have more to say later.

Please stay abreast of critical stories at The Right Source, and check out the Liberty Minute archives.

Petraeus does have some sense. You remarked earlier how ambitious the General was; this way, he can ride both sides of the fence. Presently, his career depends upon pleasing his master, Bush. Once Bush is gone though, he may be able to cash in on his statements before Warner. Of course, any military man who reaches the rank of general is a politician foremost. It is sad to see how much this is just a game to him and everyone involved at the most fetid, perverse levels of government.

I listened to the video repeatedly and wrote my own transcript of the parts that Mr. Grigg transcribed (or copied from someone else).
What I have does not appear to differ in any material way from what Mr. Grigg had. I am interested, however, in removing a possible objection on the ground that the transcription is inaccurate.
I should also note that I do wear hearing aids, so please listen to the recording for yourself and correct me if I am wrong.
Thank you.
Here is what I heard:
Senator John Warner: "Are you able to say at this time if we continue what you have laid before the Congress here as a strategy, that you feel that is making America safer?"
General David Petraeus: "I believe this is indeed the best course of action to achieve our objectives in Iraq."
Warner: "Does that make America safer?"
Petraeus: "Sir, I don't know, actually. I have not sat down and sorted out in my own mind."

Will, whether Petreus testifies under oath is rather clearly irrelevant. He was asked for an opinion. Plus, he was asked for an opinion of something that really is not related to his mission. And stating that he doesn't know the answer to the question seems a very straightforward reply. When he talks about "our objectives in Iraq", he is not necessarily discussing the objectives of the Bush Administration per se (who actually knows what those are? They keep changing.), but the more narrow objectives of his military mission, which as I understand them are to provide security sufficient to permit a political solution to evolve.

The distinct possibility that his narrow mission is virtually impossible doesn't seem to be discussed very much.

Henry, you're correct about the narrowness of Petraeus' vision, and the irony that he keeps himself focused on carrying out what is manifestly an impossible mission.

It still strikes me as astonishing that someone as astute and politically savvy as Petraeus, asked THAT question on THAT of all days, couldn't or wouldn't contrive some anodyne response along the lines of "we're fighting them over there so we'll be safer over here" or somesuch.

Will, Petraeus may be astute and politically savvy, but I suspect he is also quite honest. Rather refreshing, I think.

I watched this video a few times and found Petraeus' body language and demeanor troubling.

Before he answers the first question, he crosses his arms and covers one hand with the other. This may indicate covering up information, if not outright lying.

The second answer may be more honest. However, I would expect a general to appear more confident and sure of himself. I don't see that here.

It is possible that Petraeus is following his commander in chief's orders and saying what he wants said.