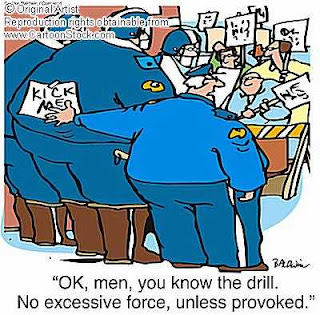 “How does it become a man to behave toward this American government today?" wrote Henry David Thoreau in 1849. "I answer that he cannot without disgrace be associated with it.”

Thoreau's assessment was inspired by his disgust over Washington's war of aggression against Mexico, and -- what was much the same thing -- the entrenchment and expansion of chattel slavery.

He would almost certainly reach the same conclusion regarding the proper relationship between people who cherish justice and the ever-growing malignancy we could call the Homeland Security State. Thoreau's comments about the servility on which the State depends have likewise been vindicated by time.

"The mass of men serve the state ... not as men mainly, but as machines, with their bodies," he lamented. "In most cases there is no free exercise whatever of the judgment or of the moral sense; but they put themselves on a level with wood and earth and stones; and wooden men can perhaps be manufactured that will serve the purpose as well."

Thoreau allowed that there are a handful of people --"heroes, patriots, martyrs, reformers in the great sense, and men" -- who distinguish themselves by serving the government "with their consciences," which unavoidably means that they "necessarily resist it for the most part; and they are commonly treated as enemies by it."

Although he declared "war with the State, after my fashion," Thoreau was not a pure anarchist, explaining that where it was possible and compatible with his principles he would "still make use and get what advantages of her I can...."

One form of association with the State that liberty activists should embrace and should exploit -- without fear of disgrace -- is jury duty.

"Under a government which imprisons unjustly, the true place for a just man is also a prison," insisted Thoreau in one of the numerous radiant epigrams adorning his masterful essay. As a matter of lamentable history, he's right. But as a matter of principle, the true place for just people in such circumstances is the jury box, where they will interpose themselves between the State and its innocent victims. This principle was elucidated in compelling detail by Thoreau's fellow abolitionist Lysander Spooner.

The fact that juries possess plenary power to judge both facts and law -- the latter giving a jury the power to nullify the enforcement of bad laws -- is perhaps the most carefully guarded secret of our current legal system. For the first century of our existence, it was commonplace for juries to be informed of that fact before being sent to deliberate. Today, a defense attorney who mentions that fact in open court can often expect to be censured by the presiding judge or even hit with a contempt-of-court charge.

Rescuing this fundamental check on government power is the mission of the Fully Informed Jury Association, which commemorates this date (September 5) as "Jury Rights Day." This observance is held in remembrance of the 1670 acquittal -- through jury nullification -- of Quaker leader William Penn on the charge of preaching an "illegal" sermon in London. The heroic holdout jurors, led by Edward Bushell, were imprisoned and tortured by the presiding judge (through what today's practitioners would call a "restricted diet" -- others call it deliberate starvation and dehydration), and set free when England's highest court upheld the right of jury nullification. 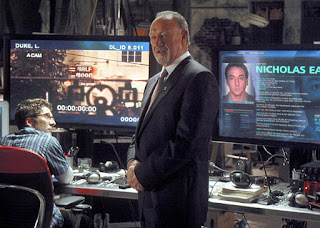 "Trials are too important to be left to juries," insisted high-octane jury consultant Rankin Fitch (Gene Hackman) in the legal potboiler The Runaway Jury. In fact, in many cases the only worthwhile jury is a "runaway" jury.

One very telling measure of the Regime's fear of jury nullification is found in the efforts expended by prosecutors -- who have become a veritable human pestilence -- to prevent cases from going to trial.

Dr. Paul Craig Roberts, who masterfully dissected the contemporary "justice" system in his 1998 book (co-written with Lawrence M. Stratton) The Tyranny of Good Intentions, points out that "the vast majority of felony cases are settled with a plea bargain...."

Most conservatives made aware of this would react with a snort and complain about excessive leniency, ignorant of another important fact: Many, perhaps most, "felonies" today involve no offenses against persons or property, no criminal intent, and are usually a product of an opportunistic prosecutor's malicious creativity in confecting a criminal offense.

It is common for prosecutors to multiply charges as a way of terrorizing an innocent defendant into accepting a plea. Very rarely do we see a defendant with the means to defend himself in such circumstances. An exception that proves the rule is the wealthy Republican Senator Larry Craig, who was manipulated into a guilty plea on a ridiculous charge, and has tardily decided to put up a fight.

But for the average citizen who finds himself targeted by an ambitious prosecutor, a plea bargain usually seems like the only relatively palatable alternative to the expense of a trial and the possibility of a long time in prison. At the bargaining table, "I'm all in" for the prosecutor means that, should he lose, he would sacrifice a little prestige, with the taxpayers absorbing all of the expenses; the defendant stands to lose everything and faces the prospect of utter ruin.

This is why so many innocent people are willing to deal. For the State, the most attractive feature of such arrangements is the fact that it keeps such cases away from juries. And we're left with a "justice" apparatus that functions, in the words of legal scholar John Langbein, like "the ancient system of judicial torture," which relied on self-incrimination through duress, rather than conviction on the basis of sound evidence.

The ardent desire of our rulers to minimize the jury system -- with the ultimate objective of abolishing it -- underscores the importance of rehabilitating the only government institution worthy of unqualified support: The fully-informed citizen jury.

The following three-part program, produced roughly two decades ago, offers additional background and insights regarding the need for, and critical importance of, jury nullification as a check on government power:


Be sure to visit The Right Source and the Liberty Minute Archive.
at 10:45 AM

Maybe jury duty would be more palatable to people who love their liberty if it were voluntary.

But where I live (California and New York) it appears to be another form of enslavement.

Tragic case down here in Florida. A group of gang bangers tried to run over a bystander for the fun of it. The man they tried to hit pulled out a pistol he was legally carrying and shot at the driver, who he hit.The driver later died. The state decided to prosecute him knowing he would be found innocent under Florida law. The DA said the office wanted a "precedent" and a good "test case". Well, that man was actually imprisoned for a few days, during which time the gang bangers burnt down his house. I mention all this because the whim and curiosity of a DA, turned this man's life upside down. It is amazing how much power these people hold.

Taylor, I agree that jury service should be voluntary; that's a point addressed in pt. 3 of the program linked to in the essay (it's near the end of the panel discussion, if memory serves).

Some advocates of military conscription contend that the draft and jury duty are natural exceptions to the ban on "involuntary servitude." My position is that the ban is universal (the language of the 13th Amendment) doesn't admit exceptions, after all) and should forbid efforts to compel jury duty.

Zachary, that's horrible but entirely believable. Could you provide me with some additional details?

I googled some of the details, but nothing came up. I remember it was out of the Miami area though. It was awhile back, but this post made me remember that the DA thought it was totally acceptable to bring a man to trial knowing he was innocent both morally and in the eyes of official state law. Oh, and it was a "test case", he used those words, for Florida's so called "stand your ground" law, which just clarified that when in public, there is no duty to try and retreat if attacked. It rightly gives the benefit of the doubt to the victim.

While I don't believe the Constitution to be any kind of authority, I am glad to know that it contains language which bans all forms of involuntary servitude, including jury duty, and I am also happy to know that you understand the importance of the ban being universal as well.

They are very careful not to let our kind of people get selected for the jury. Last time I went in, I was the first one they rejected.

"It was awhile back, but this post made me remember that the DA thought it was totally acceptable to bring a man to trial knowing he was innocent both morally and in the eyes of official state law."

This is, in my opinion, exactly what is happening in the case of Monica Montoya that Will wrote about a few weeks ago. (The good samaritan who helped the police by interpreting and who ended up arrested by them) I've become obessesed with the case and the prosecution is still pursuing her although it is clear to me that only a prosecutor with the bird brains and lack of decency of Michael Nifong would believe that the elements of obstruction exist in that case.

The power of juries to be able to judge both law (jury nullification) and fact is a critical ingredient of self-government as Dr. Paul made clear in the last video.

The complete ignorance of citizens about this fact, among others, is also yet another sign to my mind that bona fide citizen self-government is dying, if not dead already.

The California Supreme Court ruled a few years ago that judges can dismiss jurors who are suspected of engaging in jury nullification and replace them with a more compliant and docile juror. See:

I suspect this is the case in many other states as well. I guess the moral is, if you're going to vote your conscience in the deliberation room, it's best not to be honest about it.

Actually, no juror needs to give a reason for their verdict: you can simply and truthfully say that you are simply not able to convict. If you want to make a comment, you can say the chief witness for the prosecution was not believable, or something equally neutral.
Sarah Palin signed our Jury Rights Day Proclamation again this year. Nice.