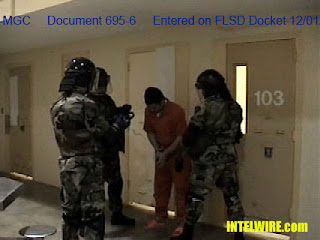 I have no way of knowing whether that pronouncement, or something very much like it, was uttered by Jose Padilla's captors after he was taken into military custody five years ago. But it certainly summarizes the Bush Regime's view of Padilla, an American citizen (however disreputable) who has been stripped of all legal protection, not only of his due process rights but also of the basic integrity of his person.

Padilla, we were told in 2002, was the key operative in an al-Qaeda plot to detonate a radiological bomb. The "evidence" against him was provided by two identified terrorists -- Khalid Sheik Mohammed and Abu Zubaydah -- who implicated him after being tortured. A third "witness," Ethiopian refugee Binyam Mohammed (right), likewise named Padilla after being tortured extensively by CIA-aligned thugs in Morocco. Among the methods used to break Mohammed was the expert use of razor blades to make tiny but exquisitely painful incisions all over his body -- including his genitals. 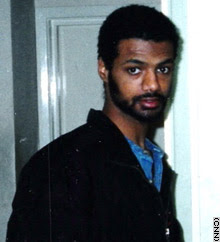 After the bloody-handed simian who defiles the Oval Office designated Padilla an "unlawful enemy combatant," the Bush Regime consigned this American citizen to a Naval brig in South Carolina and systematically worked to destroy his will through psychological torture. A "Declaration" filed by a political hack named Michael Mobbs was presented as the functional equivalent of a grand jury indictment, and a separate "declaration" by Defense Intelligence Agency head Vice Admiral Lowell E. Jacoby was offered to explain why Padilla could not be permitted due process of any kind, including conventional legal representation.

How are we to know that Padilla was a valuable intelligence source about al-Qaeda, rather than, say, a trivial gang-banger from Chicago whose only serious professional training came at Taco Bell? According to Jacoby, it is enough for us to know that the Grand and Glorious Decider -- and let all stand hushed in awe-struck reverence at the mention of his name -- has "determined" that this is so.

Furthermore, according to Jacoby, "Padilla's capture and detention were the direct result of [similar] effective intelligence gathering efforts" -- you know, like the time those greasy perverts in Morocco took a scalpel to Binyam Mohammed's penis, prompting the victim to say that he would sign anything put in front of him, including a statement implicating a U.S. citizen he didn't know.

Until late 2005, the Regime insisted that Padilla had to be held in military custody indefinitely, because permitting him to be tried in our court system would (let's say it all together) undermine national security. But Bush and his comrades eventually released Padilla for trial when it became clear that the matter was headed for the Supreme Court, and it was possible that the administration could lose. This would imperil the asserted presidential power to designate any U.S. citizen an "enemy combatant" and imprison him in perpetuity.

So the Regime condescended to permit Padilla to have a trial -- on charges that had nothing to do with any of the matters supposedly verified by their "effective intelligence gathering efforts" -- you know, waterboarding, sexual mutilation, that kind of wholesome stuff.

Padilla's trial in Miami is winding down. There has been no mention of a "dirty bomb" plot. Prosecutors have made no mention of Padilla's personal involvement in any terrorist plot of any kind. He may be -- should be -- acquitted.

If so, notes the Christian Science Monitor, the Regime may very well "try to return him to the brig"; if that were to happen, armed insurrection for the purpose of extracting Bush and Cheney from power would not be an inappropriate response. After all, what other recourse would remain if our rulers can simply ignore an acquittal, and imprison a citizen found innocent by his peers?

The former -- seizure of Padilla despite an acquittal -- may happen. The latter -- a righteous armed uprising -- will not, precisely because it is the course of action that would be chosen in such circumstances by the patriots who created our republic. With a scant handful of worthy exceptions, we are not worthy heirs to the Founders' legacy. As the Monitor observed: "Although civil libertarians protested Padilla's detention without charge, there was no significant public outcry." 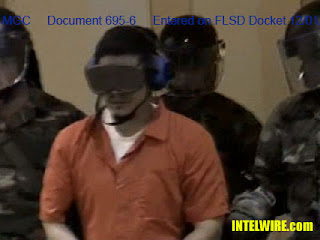 A likelier outcome would be a guilty verdict of some kind, with the jury thereby validating the Imperious Commander Guy's claim that he can declare any of us to be an un-person outside the law's protection.

This is what the entire exercise has been about all along, and it's why the Regime is determined to keep Padilla imprisoned for life. It would be completely horrifying, and utterly typical of our degenerate culture, if this crucial victory for the cause of Fuhrerprinzip were delivered not by a court or by Congress, but by a jury of common Americans.

I have no brief for Jose Padilla as an individual; he appears to be a standard-issue street thug who got the standard prison-upgrade to minor league Muslim fanatic. But there are gravities of loathsomeness, and Padilla is being used by people immeasurably more evil than he is to accomplish unspeakably vile ends.

The lengthy clip below is from the second part of a Star Trek: The Next Generation episode entitled "Chain of Command." In it we see Captain Jean-Luc Picard (Patrick Stewart) captured by the militaristic Cardassians, undergoing "enhanced interrogation techniques" intended to help him develop a sense of "dependency and trust" toward his interrogator, the urbane Cardassian Gul (commander) Muldred (David Warner, doing magnificent work through ridiculous make-up).

Patrick Stewart, who played Captain Picard, has long been active in Amnesty International and other groups working against torture. At the time this episode debuted in 1992, some critics reacted with variations on the theme of: "Oh, torture is evil, you say? Well, duh."

It is a cause for sober reflection that a moral conclusion that seemed numbingly obvious in 1992 is now considered akin to sedition when spoken aloud -- and that the Regime ruling us today brazenly employs methods more barbarous than those used by the "Cardassians," who are among the most savage races ever depicted in science fiction.

Will, When Captain Kirk was mind probed to near death by a mind probing chair of doom, he gritted his teeth, sweat, and went into convulsions, but divulged nothing to the enemy. When Picard has his mind probed or is tortured, he caves in and becomes a slave (this has happened several times).

Remember Kirk was also once placed on a spinning android replicator turntable AND DIDN'T THROW UP!

(These are just two of the reasons there are more "Kirk is better" lists than "Picard is better" lists. I'm not making fun of the subject matter, but thought I'd inject a little humor. :-) We all need an occasional diversion from the goon in the White House and the stresses of battling the growing police state. Trek is one of mine.)

Guilty or not, much is at stake here for the Bush regime. You have to question the impartiality of the jury . The government can't really afford an acquittal. Jury bribery isn't anything new.

Jury nullification would be another avenue. Rather than looking at what Padilla is charged with, the jury could look at the constitutionality of his incarceration in the first place.

In that light, without even looking at the terror charges, they could acquit him.

This technique has been used effectively in acquittals of IRS filing cases; ie, show me the law. Lou

Of course you're all forgetting just how the judge will likely "railroad" the jury into making "the right verdict". Every time I had to sit on a jury it was a farce. People were so clueless that they only wanted to convict just so they could go home and watch the boob tube! Definitely a nation gets the leadership it deserves.

The jury found him guilt of "conspiracy". I think that you could convict a ham sandwich of conspiracy.

Here is the story.