From Liberty to Force 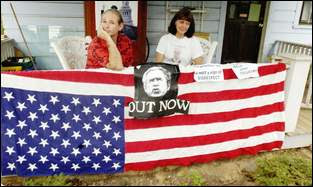 Thought Criminals: Mark and Deborah Kuhn display the "desecrated" flag that provided the pretext for their arrest.


"[America] goes not abroad, in search of monsters to destroy. She is the well-wisher to the freedom and independence of all. She is the champion and vindicator only of her own. She will commend the general cause by the countenance of her voice, and the benignant sympathy of her example. She well knows that by once enlisting under other banners than her own, were they even the banners of foreign independence, she would involve herself beyond the power of extrication, in all the wars of interest and intrigue, of individual avarice, envy, and ambition, which assume the colors and usurp the standard of freedom. The fundamental maxims of her policy would insensibly change from liberty to force.... She might become the dictatress of the world. She would be no longer the ruler of her own spirit.... [America's] glory is not dominion, but liberty."

To exercise force abroad, the State must resort to coercion at home. Our present circumstances are somewhat unusual, given that Washington's imperial designs are being sustained with rented troops and borrowed money; this has obviated, at least for a while, the demand for War taxes, exacted from both our treasure and our blood. The day rapidly approaches when such impositions will be made. For now it's useful to contemplate how the war in Iraq is helping cultivate tyrannical habits of mind among the State's armed enforcement agents. U.S. soldiers carrying out the occupation of Iraq routinely break down doors in the middle of the night in search of insurgents and other troublesome individuals.

Here's how the routine is described by Sergeant John Bruhns, who served in Baghdad and Abu Ghraib (the town, not the gulag):

You go up the stairs. You grab the man of the house. You rip him out of bed in front of his wife. You put him up against the wall. You have junior-level troops, PFCs [privates first class], specialists will run into the other rooms and grab the family, and you'll group them all together. Then you go into a room and you tear the room to shreds and you make sure there's no weapons or anything that they can use to attack us.

And if you find something, then you'll detain him. If not, you'll say, 'Sorry to disturb you. Have a nice evening.' So you've just humiliated this man in front of his entire family and terrorized his entire family and you've destroyed his home. And then you go right next door and you do the same thing in a hundred homes." (Emphasis added)

Apart from relatively minor details, what Sgt. Bruhns describes here is not that different from a no-knock raid carried out by a paramilitary drug enforcement squad. The element worthy of our particular attention in the Iraq example is the focus on "anti-U.S. propaganda," a description that could apply to any criticism of the occupation. It is fairly common for Iraqis to be detained for possessing "anti-U.S." materials.

I believe that Mark and Deborah Kuhn of Asheville, North Carolina are the first U.S. citizens to experience arrest and detention by military personnel for the supposed offense of publicizing "anti-U.S." sentiments -- in this case, a U.S. flag displayed upside-down and decorated with an anti-Bush display.

As previously recounted in this space, the Kuhns' display was noticed by Staff Sergeant Mark Radford of the North Carolina National Guard, who took offense and, more importantly, took it upon himself to visit the Kuhns and upbraid them for it.

After failing to over-awe the Kuhns, Radford contacted a "fellow National Guardsman" and Iraq veteran -- 25-year-old Brian Scarborough, a newly minted Buncome County Sheriff's Deputy.
Apparently these two heroes decided to show the Kuhns how they take care of business in Baghdad, Hooo-ah.

The foregoing was not intended to mock people who have worn the uniform honorably; such individuals are entitled to respect and, where appropriate, our gratitude. It is my intention to mock Radford and Scarborough, however, since their behavior was that of bullies whose instincts are similar to those who belong to street gangs and other criminal cliques.

This point has been made before, but it bears repeating: Tens, perhaps hundreds, of thousands of law enforcement officers either have or will serve in Iraq. When they return to domestic duty, they will retain certain habits of mind they acquired or refined in combat. Coupled with the ever-increasing militarization of the police, this is a dangerous thing. When this is combined with resentments of the "stab-in-the-back" variety, the results could be catastrophic. 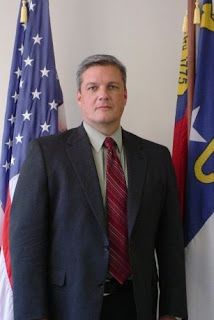 Buncome County Sheriff Van Duncan, who seems to be pretty typical of the new breed (he places a lot of emphasis on "community policing" and expanding the manpower pool), generously conceded that the Kuhns "are allowed to do" what they did with their own flag. However -- and there is always a "however" with people like Duncan -- "if it weren't for young men like Deputy Scarborough, we wouldn't have those rights."

The unpalatable truth is that "young men like Deputy Scarborough" are an acute danger to our rights, and the indispensable tools of those who seek to exterminate our rights.

This isn't because the Brian Scarboroughs are depraved, for the most part; it's because they've been suckled on the Regime's ideology, in which "freedom" is not valued as highly as force, and establishing the state's dominion, rather than protecting individual liberty, is the objective of government.


Please be sure to check out The Right Source and the Liberty Minute archive.

So far we have discussed the change in police tactics, and the growing indecency of our "laws." But I've noticed something else not dealt with extensively: The growing number of police officers. Without exaggeration , 1/300 cars on the road where I live is an LEO. 5 years ago it wasn't half that. Kind of scary if you ask me. Our economy and our liberties can't stand this strain forever.

I'm constantly amazed at how many people swallow that venomous swill about how "if it weren't for (insert your favorite parasite) then you wouldn't have (blah blah blah)".

As if! Just where in the Declaration of Independence, or the Constitution (those tired pieces of paper these dictatorial Nimrods purportedly "defend") does it say that I'm beholden to police and goose-stepping military goons? Anyone? Anyone? Buehler?

This is indicative of the TeeVee indoctrinated zombie-underclass who couldn't intellectually punch their way out of a wet paper bag. I find I can carve more moral spine out of a rotten banana than any criminal Congressman, Cop or Chief. And I'm being generous at that.