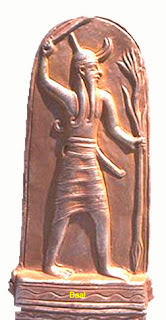 "Then they [the prophets of Ba'al] called on the name of Ba'al from morning till noon: `O Ba'al, hear us!' they shouted. But there was no response; no one answered. And they danced around the altar they had made. At noon Elijah began to taunt them. `Shout louder!' he said. `Surely he is a god! Perhaps he is deep in thought, or busy traveling. Maybe he is sleeping and must be awakened.' So they shouted louder and slashed themselves with swords and spears, as was their custom, until the blood flowed. But there was no response, no one answered, no one paid attention." I Kings 18:26-27 (NIV)


It is fortunate that some conscientious soul removed all of the sharp objects from the studio before CNBC's Jim Cramer, who is among the most histrionic evangelists of the Fed's loose money policies, suffered the following breakdown:

Cramer -- like the pagan priests of Ba'al -- is overwrought with anguish because of the indifferent silence from his deity, in this case the Federal Reserve and its current avatar, Ben Bernanke. The Fed has the power to conjure "money" from the ether (in the digital age, most fiat "money" remains purely ethereal anyway), and Bernanke has expatiated on the supposed virtues of official counterfeiting at great length and with considerable passion.

Yet the divine Fed withholds the much-desired benison, even as the sub-prime mortgage industry collapses like a federally constructed highway bridge, crushing lenders and borrowers beneath the weight of its accumulated corruption, and wreaking collateral damage on the entire consumer economy.

As with everything Cramer does on his "Mad Money" program, his August 3 seizure was largely theatrical, and inspired by a desire to cover his posterior. He "went outside of character" to "talk about the humanity of the situation" -- specifically, the 7 million people who accepted former Fed Commissar Greenspan's invitation to take out mortgages on "teaser rates" beginning in 2005. Cramer believes that they will soon lose their homes and suffer ruination.

"I want my conscience clean ...when -- I think `when' not `if' -- things unravel in the way that I've spoken," Cramer explains. Having staged his perfunctory fit of conscience, Cramer has since returned to form, hymning the praises of loose money and speculative investment.

I suspect that Cramer remembers what happened to the original Prophets of Ba'al at Kishon Valley. His fit of conspicuous agony for the "forgotten man" would thus be meant to immunize himself against the possibility of being pitched over the precipice with the other pagan Fed-worshipers when the ruination he foresees really gets underway. 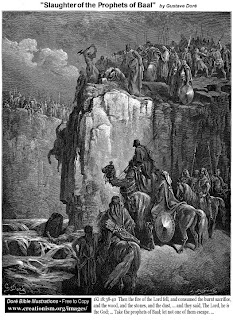 And awaaaaaaay they go: The Prophets of Ba'al experience a brief and invigorating lesson in applied physics before suffering death through deceleration trauma.

I wish to offer my thanks, once again, to those who have contacted me to express their care and concern for Korrin and our family, and particularly those who have generously donated to us; as time permits I intend to express my thanks to each of you personally.

Korrin has been hospitalized for a month, and she has been relocated to a more distant facility to get specialized treatment. I won't be able to see her as often, but her prognosis is very good. I wish to emphasize that her condition, while life-changing, is not directly life-threatening. It has been very difficult for our children to spend nearly the entire Summer without their mother. Once again, to those who have offered prayers and offered financial and material help to our family, thanks and God bless you.

It is because of the developments mentioned above that I have been somewhat austere in writing new posts. This will soon change, and I appreciate your patience.

Will, your news about Korrin's hopeful prognosis is very encouraging. It is an answer to the many prayers offered by those who care about you and your family. Thanks for the update.

Your blogs are greatly appreciated, too, and very much needed. Even amidst distress, you still manage to maintain your edge!

For a bit of real-world humor, check this out:

At last! An encouraging word about Korrin. How sad the cost is geographic distance. We pray as much for you, Will, and for the children.

As for Cramer and his foolishness: Some people I trust a lot more have said the bubble has already been pricked. Because of the scale of our economy, and the scale of the deception, it may take a few months to show up in the difference between what's in the pocket and what's on the price tag, compared to what we have seen in the past year.

My continued thoughts and prayers are with you, Korrin, and the children. Hang in there! The Lord is with you.

I found your blog via a post from my local Ron Paul group. Your description of yourself closely follows my own, although I have only 4 kids. I will lift up your family and your wife in prayer. We have had medical issues in the past which have put a strain on our family as well.