Building a Better Beast : "Homeland Security" in the US and the PRC 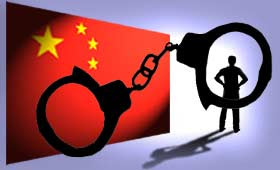 Made in the USA: When Soviet dissident Vladimir Bukovsky was arrested by the KGB about 40 years ago, his guards told him the handcuffs he was wearing were made in America. US investment capital is helping China's thuggish gerontocracy keep its rising entrepreneurial population under surveillance.


Let it not be said that the disastrous and unjustifiable Iraq war has failed to yield commercial spin-offs.

Just as the first Gulf War famously prompted the Chinese General Staff to begin a crash modernization of the People's Liberation Army, the garrison state technology on display in the ongoing occupation of Iraq has inspired Lin Jianghuai, the 38-year-old tech tycoon heading China Public Security Technology, Inc -- a key contractor for the Ministry of Public Security (MSP), Beijing's version of the Department of Homeland Security.

Lin amassed a considerable fortune manufacturing a key component for DVD players. As he followed the progress of the Iraq war, Lin was impressed with the police-oriented hardware deployed by occupation troops, such as the HIIDE (Hand-held Interagency Identity Detection Equipment) system, which is simiar to the Mobilisa "Sentry" identity check device described in this space some months ago.

"I really felt strongly that the police [in China] would absolutely benefit from such technology," Lin recalls. "Bush helped me get my vision."

That's our Bush: Inspiring tyrants from Harare to Beijing.

In pursuit of that "vision," Lin purchased an undistinguished e-commerce business, fused it to a minuscule publicly traded Florida printing company via a "reverse merger," and then renamed the consolidated enterprise "China Public Security," or CPS. Currently traded only in limited fashion, CPS will be traded on the NASDAQ next year, if Lin's ambitions come to fruition. There's no denying that it is a growth stock.

China's Ministry of Public Security then awarded Lin's company a contract for developing and deploying a pilot hi-tech surveillance program in Shenzen, a city next to Hong Kong that serves as a computer manufacturing center. At the center of CPS's surveillance system is a "residency card," which is very close kindred to the emerging REAL ID system here in the US.

The computer-readable chip in the Shenzen identity card, reports the New York Times, "will include not just the citizen's name and address but also work history, educational background, religion, ethnicity, police record, medical insurance status and landlord's phone number. Even personal reproductive history will be included, for enforcement of China's controversial `one child' policy. Plans are being studied to add credit histories, subway travel payments and small purchases charged to the card."

If the State objects to any element of the individual's life and background, as documented in the card, that individual will not be able to earn a living or participate in the economy.

This system is being described by Chinese authorities as a "pilot program" for a future nation-wide human inventory control apparatus. I can't help but suspect that it's likewise intended to provide a shakedown for the deployment of a very similar system in our own Homeland Security State. 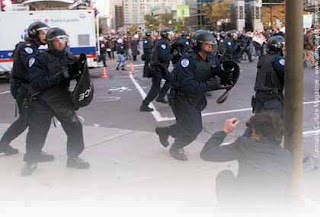 The Pinnacle Fund, as it happens, is a significant investor in US Homeland Security contractors, among them GVI Security Solutions, Inc, which specializes in large-scale surveillance. Not long ago, former Under Secretary of Homeland Security Asa Hutchinson was named to the GVIS board of directors, joining such dubious luminaries as former New York City Police Commissioner Howard Safir and Nazzareno Paciotti, formerly of Pinkerton Investigations.

GVIS is just one of numerous corporatist entities looking for easy and secure subsidized profits by building the garrison state both at home and abroad. There will be plenty of work to go around as the Regime builds its own version of the Shenzen Residence Card Information Management System.

The embryo of the U.S. version of that program is the proposed Employment Eligibility Verification System (EEVS) or E-Verify. Adam Thomas of Press Esc offers a tidy summation of how this initiative -- highlighted in a recent White House press release -- will work:

"[E-Verify] will initially require more than 200,000 companies doing Federal business to use the system to establish employment eligibility of new hires and the validity of their Social Security Numbers. Later this system will be expanded to cover all companies and will include photo screening features through agreements to allow E-Verify access to the repository of photographs in the State Department of Motor Vehicles databases."

At the risk of making myself obnoxious on this point as on so many others, I'm constrained to observe that the envisioned role in this scheme played by the State DMVs illustrates yet again that local, independent police agencies have gone the way of the vinyl LP: They're not quite extinct, but might as well be.

Much as it grieves me to do so, I must quote the ACLU's analysis of EEVS/E-Verify: "Under this already flawed program no one would be able to work in the U.S. without DHS [Department of Homeland Security] approval -- creating a `No Work List' similar to the government's `No Fly List.'" 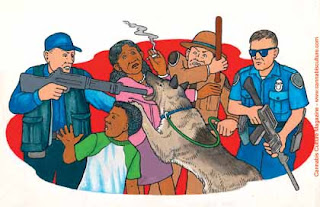 This is being done, of course, as an immigration control measure, and it's propelled by the kind of people -- such as these charming folks -- whose determination to keep Mexicans out of the country is on par with their indifference to the emergence of a garrison state within our country.
Oh, and that's hardly the end of the undertakings outlined by the White House:


*“The Department of Homeland Security will continue to explore effective and cost-efficient means of establishing biometric exit requirements at land border crossings.” (Emphasis added.) As I warned about a year ago, the real point of "border security" under the Homeland Security Regime is to keep us in, not to keep "them" out.

*“Starting January 31, 2008, DHS will phase in a requirement for passports or other secure documents for sea and land ports of entry.” The most tacit but unmistakable intent here is to compel any American who leaves the country for any reason to obtain a "secure" federal ID document; as others have pointed out, this is a necessary step toward the eventual creation of a Soviet-style system of internal passports and checkpoints.

*“The Administration is training hundreds of state and local law enforcement officers to address illegal immigration in their communities.” Wonderful! Allow me to find a bucket to hold my joy. This underscores, yet again, the fact that the entire immigration "crisis" has been exploited as a way to build a police state, with the support -- sometimes grudging, but often enthusiastic -- of the very people who would ordinarily put up at least some resistance.

Following the defeat of the immigration "reform" bill in the Senate last June, Michael Savage -- who helped himself to a large portion of the credit for that result -- shared a provocative thought with his audience. Dr. Savage reported that his evening walks regularly take him by a branch office of the Department of Homeland Security, a facility that includes a large motor pool. Recently, he continued, he has seen row after row of newly painted black buses with blacked-out windows. Those buses, Savage gleefully predicted, are being prepared for the day when illegal immigrants will be gathered by the thousands, tens of thousands, or hundreds of thousands, and forcibly deported.


Please visit The Right Source and the Liberty Minute archive.
at 3:54 PM

On a related note, I'm waiting for the VA Hospital to start requiring the implanted chip for all clinical treatment.

I am very angry about the illegal immigrant issue. That said, I am also fearful about how they will enforce the law.

Your post portrays a scenario which confirms my fear.

Will, this is an excellent article (as usual)but I think you will agree that the stream of illegal immigrants who use forged documents must be stopped. How do we manage a system of identification that protects privacy and cannot be forged?

It's chilling that Canada and the U.S. are sharing data about their citizens. Perhaps this form of "cooperation" will be expanded to include other countries, if it hasn't been already. With criticism of our regime apparently grounds for being placed on a watch list, those who wish to travel will think twice about exercising their First Amendment freedoms. Orwell's dreaded thought police are alive and well.

Excellent article. I found this blog following a google search inspired by the NY times article about this Chinese surveillance company's American backers. There is a special place in hell for the unprincipled American investor in political and religious suppression in China.

As to the peripherally related US immigration problem being used to justify more surveillance and control of our movements...I'm sorry, I don't see the huge problem of illegal immigration. All the 9/11 terrorists came in using legal documents, their abuses of the immigration laws could have easily been snagged with existing laws and technology. If your objections are over too many brown people from south of the border being here - get over it. They were here first, generally speaking, and if they hadn't been 90% exterminated by we Europeans, there would be a hell of a lot more of them here now, anyway.

"Much as it grieves me to do so, I must quote the ACLU's analysis of EEVS/E-Verify: "

I think you protest too much. You and the ACLU share a passion for protecting our Bill of Rights. And they actually do something about it, not just write about it. Give credit where due.

First, thanks for the kind comments, and welcome to my blog! I really appreciate your contribution.

With reference to the ACLU:

As a libertarian/classical liberal with minarchist tendencies and an open mind regarding market anarchy (picky, picky, picky....), I have a great deal of respect for several prominent ACLU members, most notably Nat Hentoff and Laird Wilcox. And my problems with the ACLU (leaving aside decades-old ideological quarrels that could be considered irrelevant now) are similar to those voiced by Mr. Hentoff.

I am constrained to admit that in the era of Homeland Security and brazen military imperialism, the ACLU and MoveOn.org are both doing very valuable work.

The magnitude of that concession will be obvious to you once it's understood that this assessment is offered by a former employee of the John Birch Society -- who was fired, in no small measure, because of my insistence that it was more important right now to fight on behalf of the Bill of Rights than to rile up the masses against the Brown Peril (illegal immigration, the Persian Peril, and any other conveniently dusky-skinned foreign menace).