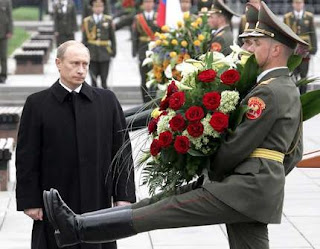 Item: "According to a poll last month by the Moscow-based Levada Center, 54 percent of Russians between 16 and 19 believe Stalin was `a wise leader,' and a similar number thought the collapse of the Soviet Union was `a tragedy.' (Two thirds also thought that America was a `rival and enemy' and 62 percent believed that the government should `deport most immigrants.') `Many of my classmates believe that some kind of Soviet golden era existed before the West came in and destroyed everything,' says Fillip Kuznetsov, an international-relations student at Moscow University. `They also believe the state is justified in doing anything it likes to its citizens in the name of some great cause.'" 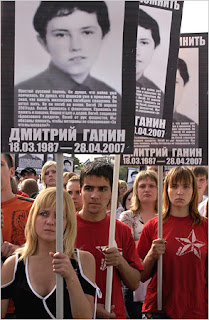 Item: "After a newly self-confident, oil-rich Russia teamed up with China in joint military exercises Friday, it is moving to reclaim the former Soviet Union's status as a global military power. A seven-year, $200-billion rearmament plan signed by President Vladimir Putin earlier this year will purchase new generations of missiles, planes, and perhaps aircraft carriers to rebuild Russia's arsenal." 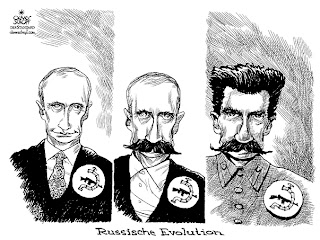 My first thought, prompted particularly by the comment about the State "doing anything it likes to its citizens in the name of some great cause," was: The same neo-con cabal that has seized the U.S. executive branch has taken control of Moscow as well.

It makes more sense to believe that the Putin regime's embrace of a watered-down variant of Stalinism is at least in part a reaction to the militarist mania that has characterized Washington since the neo-cons -- who could be considered Trotsky's distant offspring -- took over. As I've noted elsewhere, Washington years ago replaced Moscow as the headquarters of the global collectivist revolution.

Managing relations with Russia would always be a challenge, even absent the ambitions of Putin and his siloviki. But in a display of the perverted genius peculiar to Washington, the Bush Regime has not only cultivated the worst elements of Russia's ruling clique, its behavior has provoked understandable concerns among the long-suffering Russian people and provided their rulers with a plausible foreign enemy.

For people living in Russia's "near abroad" -- Estonia, for example -- things are probably going to get unpleasant very soon. And Russia's status as a rising power in the most important economic realm -- energy -- will soon give Moscow greater leverage than its arsenal ever could.

The U.S. is deeply in debt to foreign lenders, particularly China. Washington's military (I don't know that the collective possessive pronoun "our" still applies) has been all but used up in the Idiot King's Mesopotamian war. Because of that war, and the sanctimonious bellicosity of the Bush Regime, our nation's international prestige is at its lowest ebb. The machinery for a domestic police state akin to Stalin's is in place.

It seems to me that the last thing we need -- however useful it would be to our rulers, who are ever in search of new rationales for regimentation -- is a revived stand-off with Russia, particularly one that in relative terms is a more plausible rival than the Soviets. But that's just what we're likely to get.

On the lighter side, it's always fun to see The Simpsons vindicated as a source of political prophecy. Here's their take on the Golitsyn thesis:


Please be sure to visit The Right Source, and the Liberty Minute archive.

Enemies, both internal and external, act like nutrients required for growth of the state and those favored industries supplying the state's needs. If threats don't exist, they must be created or, in the case of foreign powers and organizations, goaded into arming, rearming, or acting. One can only hope that peaceful trade will eventually supplant the current vicious and addictive cycle, but that seems unlikely in the near term. Moving toward a Swiss style nonthreatening (true) defense program would be a major step in the right direction.

Will, I'm sorry to have missed your latter posts since the "Padilla Precedent."

I've been busy in the interim and then I had went on a weekend motorcycle trip to the Shenandoah NP (near Big Meadows) to camp overnight Saturday and came back late Sunday night. My buddy and I rode our cheap, used, dual-sport F650s up there from Gloucester on I-64 while his wife and children rode in their car. I pitched a two-man sized tent and they a six-man for the kiddies and themselves.

Even though our mountain areas are not even close to what you have available in your own neck o' the woods in Idaho and elsewhere in the West, it is still great to adventure to these parts and not hear the "bongo-bangin'" jungle noise so common in the Tidewater region and probably in other urban environments as well. Not to mention observing Jackson's trek through Newmarket Gap and the Valley. Even though this, as all NPs, is federal land, the Jackson trek is well marked. I was pleasantly surprised that the feds would preserve this history.

Many of the folk that travel to the Shenandoah NP often are, ironically enough, from the Imperial capital region I found out. Indians (India), Hispanics, and Muslims of various ethnicities are also a commonly seen lot. And all from the N VA region.

Anyway, after gettin' back home in Yorktown Sunday night from my buddy's house in Gloucester, after riding through a heavy thunderstorm and torrential rain on my motorcycle (sigh), I found out my cable had went out completely Saturday night at about 8PM. I was dead tired from the foot trekking in the park areas and the motorcycling to care. So, to make a long story short, I gots me cable back up today.

Now, about your piece here, Will, I think the entire glasnost and perestroika was all according to a long-term plan. Anatoliy Golitsyn wrote New Lies for Old in 1984 explaining much of this long-term strategy of the Kremlin.

And as for the commoners themselves, it should surprise no one that 54% thought Stalin "a wise leader." Actually, it surprises me that it's only 54% of the 16 to 19 year olds. Perhaps, I shouldn't be since that demographic has largely come of age since the "collapse" of the USSR. Even so, after 74 long years (1917-1991) of hardcore communism, it's amazing to me that even a modicum of the populace think Stalin was not wise. And I would say that the existence of that vestige was probably because of heroic folk like Richard Wurmbrand and others who labored hard to keep and/or insinuate the Gospel message into Eastern-bloc countries and the USSR throughout his life.

Will, even though I agree with you that our government in the Imperial Capital is not benign in any sense, a given country could be benign and never have interfered with another country's internal or external affairs in any way, yet it's always possible that the people could still believe that that country is a real enemy because they take as gospel whatever their government feeds them for breakfast, lunch, and dinner. And that reveals much more about the character makeup of the individual citizens than it does the ruling clique, whether we're talking about America, Russia, or anywhere else for that matter.

Contrary to popular belief, the respective peoples themselves of any given country, especially a largely homogenous one, will LOVE their OWN government much more than is immediately apparent to the casual observer. I guess it's that ol' time "nationalism" you spoke of before and loathe. It's a unique and unfortunate trait of only humanoids among the creatures of this earth.

Even though the globalist-minded elites in various parts of the world are working overtime to promote heterogeneity over homogeny, it still doesn't work all that well in practice.

No surprise concerning the opinion of Russians that Stalin was a "great leader" and that the West is still the enemy (the only thing close to a surprise is that the percentage of those believing this was as low as 54%). It boggles the mind to think that Westerners in general and Amoricons in particular believe that the peoples of the former USSR would be in any way receptive to the concept of Western-style political freedom. There is no history whatsoever of such concepts in action in that part of the world. While there are certainly individuals in Russia and the other former Soviet republics who no doubt yearn for true freedom and look upon their Communist past with horror and revulsion, they are a distinct minority. The Russian mindset, in particular, is one of ovine conformity and deference to authority, the harsher the more admirable. Thus it has always been, thus it will always be.