Too Short a Season: Derek Hale, Victim of the Homeland Security State, as Remembered by a Friend

Sgt. Derek J. Hale, USMC, who was murdered by police in Wilmington, Delaware last November, was a "great kid -- responsible; well mannered," recalls a man who knew him as a child in Cape Girardeau, Missouri. "It's a damned shame what they did to him out there."

"I managed a baseball card shop that Derek and his friends frequented as teenagers. He was a responsible young man who had his own lawn care business at age 13 [or]14. He took care of our lawn until he graduated from high school. I can remember the day that he decided to join the Marines---he came into the shop and was excited. I watched him grow from a awkward teen who was very nervous and shy around young ladies to a young man who finally found his niche. Unfortunately I didn't get to see him much after he left for the Marines though I kept track of him through this father who lived in Cape as well. "

Derek served two tours in Iraq before being honorably discharged for medical reasons. He was married shortly before leaving the Marine Corps, and celebrated his first anniversary shortly before he was gunned down by the police wolf-pack (8-10 heavily armed officers clad in black, according to eyewitnesses) on the front porch of a friend's home in Wilmington.

"To Protect and Serve"?


Derek was unarmed (police claim to have found a switchblade in his clothing, although his step-brother says Derek never carried one, preferring a Swiss Army Knife instead) and not the subject of an arrest warrant or criminal investigation. Yet he was hit with seven Taser blasts in the space of 73 seconds while several witnesses -- including his friend and her two young children -- looked on in horror and pleaded with the police.

Practically the last thing Derek said before being shot at point-blank range by Lt. William Browne was: "Not in front of the kids -- get the kids out of here."

Derek, who joined the Pagans Motorcycle Club shortly after leaving the Marines, had traveled from Virginia to Delaware as part of a "Toys for Tots" promotion. Some Pagans were suspected of involvement in narcotics-related crimes, but there was never any evidence implicating Derek.
"The `Toys for Tots' thing was something Derek would have done wholeheartedly," comments his friend. "Doing a favor for a friend was something he would have done without question.... There was no way in hell Derek was involved in drugs of any kind."

"I spent many an afternoon talking with Derek when he would visit my store; his character and reputation were beyond reproach," he continues. "I can remember him spending time with an autistic classmate and including the young man in things that he and his friends did together. I have a three-year-old son and I would be most happy if I knew he would turn out to have the character and respect for people (particularly his elders) that Derek had."

Official inquiries depict Derek as a violent criminal whose "defiant" and "menacing" behavior left the heavily armed police -- who outnumbered him at least 8-to-1 -- afraid for their lives. His friend finds that claim to be ridiculous.

"Derek always had a sense of justice and fairness," his friend observes. "There is no way in hell he would have threatened a police posse. When I saw his obit in the local paper I thought he must have been killed in Iraq or something -- but alas our own home-grown terrorists took the life of an innocent man." 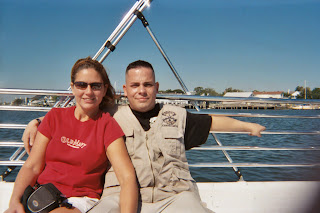 "At some point," he concludes, "I would like to call [Derek's] widow and tell her what a fine man her husband was. I've had her number and just didn't feel right about calling her out of the blue, yet I am compelled to offer moral support. I hope that his widow and his parents hang it in the ass of the ... police department and AG's office.... I wish there would be a groundswell of support against the killing of this soldier that murder charges are brought against those terrorists. It is a sad day in a country's history when a soldier can return from two tours of duty in Iraq and can be slain in the streets of his own country by people who get a nut by torturing and killing the people they were hired to protect." 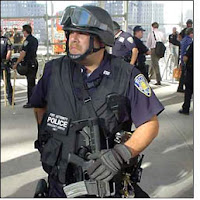 "Our country is going to hell and these patriotic Kool-Aid drinkers are too damned stupid to realize they are being duped by a group of people who count on the American people not thinking for themselves."

If you're interested in helping Derek's family, you can send help to:

Please be sure to visit The Right Source, and the Liberty Minute archive.

What is the situation of the press in Delaware and Virginia? I'd like to see justice done, and as much as they can't be trusted, they can help in situations like these.

The case of Mr. Hale's murder by THUGGISH CRIMINAL TERRORISTS CLOTHED IN SCHUTZSTAFFEL BLACK cannot be allowed to be swept under the rug by the GESTAPO-like police departments/prosecutors offices involved.

May Mr. Hale rest in peace and may the Lord comfort and wipe away the tears and fears of this family.

A feeling of trepidation overcame me as I stumbled into a police function at our local Ramada Inn hotel. Observing my visible
anxiety, a caterer standing nearby reassured me that the hundreds of skinheads in attendance weren't neo-nazis, and that they were, in fact, police officers. Strangely, I felt no consolation.

"A feeling of trepidation overcame me as I stumbled into a police function at our local Ramada Inn hotel. Observing my visible
anxiety, a caterer standing nearby reassured me that the hundreds of skinheads in attendance weren't neo-nazis, and that they were, in fact, police officers. Strangely, I felt no consolation."

Not only would I have felt no consolation, I would have felt more endangered than ever. I can tell you from first-hand experience (years ago in my college days bussing tables in a restaurant/bar frequented by cops) that an off-duty gathering of cops, especially where alcohol is involved, nearly always leads to grief for innocent citizens in the vicinity (see the press reports of cop behavior during National "Law Enforcement" Day in D.C. this year for a sampling of cops showing their true colors). Many a night the cops would gather at this favorite watering hole just as it was closing, per letter of the law, for us ordinary plebes. Woe unto the ordinary plebe who didn't clear out immediately at the stroke of 2:00 AM, for he would be mercilessly harassed and not infrequently arrested by the off-duty oinkers, most of whom were already well into their cups and who refused to leave sometimes until 4:00AM, well after closing time. Not infrequently, according to the hapless bar tenders and waitresses compelled to serve these uniformed thugs who acted as if above the law, the destruction of property (broken glass and furniture) and disrespect toward the restaurant staff (waitresses groped and fondled with impunity), were infinitely worse than on even those weekend nights with the rowdiest of customers. But, hey, "serving and protecting" can take many forms, right?