Praying for a Terrorist Strike: The GOP's Newest Political Strategy 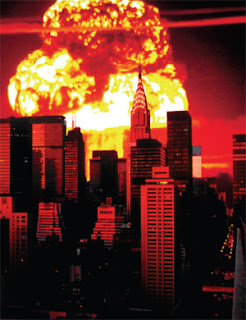 Nuclear terrorism: If it happens, it will be an answer to Republican prayers.

Former Republican Senator Rick Santorum made the grand crusade against “Islamic fascism” the central focus of his unsuccessful 2006 re-election effort.

On numerous occasions the preening Keystone State solon – who couldn't glance at a mirror without seeing Churchill's bulldog demeanor glowering back at him – insisted that it was the “destiny” of “this generation” to fight an apocalyptic war against radical Islam. Unlike his more equivocal comrades in the Republican branch of the War Party, Santorum made it clear that his preferred “exit strategy” for Iraq would be to invade (or at least bomb) Iran.

After long acquaintance with, and scrutiny of, Mr. Santorum, Pennsylvania's voters decided he was more Church Lady than Churchill,* and gave him a chance to pursue new opportunities in the private sector. So Santorum delivered a suitably melodramatic farewell address and retreated into a comfortable sinecure as a Washington lobbyist.

Despair not for Rick Santorum during that bleak season when he, like Churchill before him, toils in the exile into which he was cast by an ungrateful electorate. He has never abandoned the hope that the American public will come to embrace the wisdom of a generational war. It's just that Santorum has now invested that hope in the murderous intentions of the Islamic fanatics he has warned about. To put the matter bluntly, Santorum is obviously hoping, and perhaps even praying, for Americans to die at the hands of Jihadists.

How else are rational people supposed to understand the following remarks offered by Santorum during a July 7 interview on Hugh Hewitt's syndicated radio program:

As others have pointed out, Santorum is not the only prominent Republican figure to predict that wayward Americans, having allowed themselves to doubt the divine insight of the Dear Leader, will soon be smitten by the chastening hand of history.

Just weeks ago, Arkansas Republican chairman Dennis Milligan, who describes himself as “150 percent” behind Bush and his Iraq war, said in an on-the-record interview with the Arkansas Democrat-Gazette: “At the end of the day, I believe fully the president is doing the right thing, and I think all we need is some attacks on American soil like we had on [Sept. 11, 2001 ], and the naysayers will come around very quickly to appreciate not only the commitment for President Bush, but the sacrifice that has been made by men and women to protect this country.”

Both of those abhorrent comments are riffs on a familiar Rovian theme: Vote Republican and support the Dear Leader, or die. Speaking of Rove: In the current issue of American Spectator conservative actor and economist Ben Stein, a long-time war supporter who now considers the Iraq venture to be “an unmitigated disaster,” describes a recent dinner at Rove's house with GOP adviser Aram Bakshian. Both Rove and Bakshian were “very upbeat about the GOP and the war,” which to minds as cynical as my own suggests that something Santorum would consider usefully “unfortunate” may soon transpire.

People like Santorum and Milligan (and Dana Rohrabacher, the stupidest consequential public figure not named Bush or Hannity) ache for disaster. They pant after it with vulgar, undisguised lust. They are tremulous with unconsummated desire for validation in the form of dead Americans and ruined cities.

Revolting and vile as this is, it is not unique. In fact, these repellent people are firmly and squarely in the interventionist tradition of American politics, in which cheerfully anticipating the death of Americans has a long and venerable history.

Writing in Foreign Affairs a dozen years ago (excerpt), the late Establishment historian Arthur Schlesinger Jr. wrote that “it is to Joseph Stalin that Americans owe the 40-year suppression of the isolationist impulse.”

Stalin's regime slaughtered scores of millions, helped precipitate the Second World War, and (thanks to the connivance of Washington) acquired thermonuclear weapons capable of incinerating much of the world – but at least he wasn't an isolationist. Stalin and his successors were immeasurably useful allies for the American Power Elite against their common enemy – Americans and others who wanted to cultivate their own gardens and live in freedom and peace.

In 1947, Senator Arthur Vandenberg described Washington's foreign policy at the beginning of the Cold War as that of “scaring hell out of the American people.” In the same year, Senator Robert Taft, who yielded to nobody in his detestation for Communism and other forms of collectivism, described himself as being “more than a bit tired of having the Russian menace invoked as a reason for doing any- and everything that might or might not be desirable or necessary on its own merits.”

By 1950, American public sentiment was fiercely anti-Communist and just as passionately opposed to the interventionist foreign policy “consensus.” It was at that moment of crisis, recalled former Secretary of State Dean Acheson in 1954, that the Korean war “came along and saved us.” 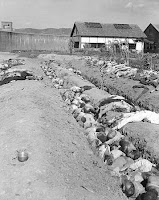 Some scenes from the Korean War, also known as "Saving Secretary Acheson (and his Interventionist Buddies)."

Saving the plans of Acheson and his comrades cost the lives of more than 50,000 Americans in a war that has never formally been brought to an end.

Interventionists have always known that Americans aren't naturally inclined to go abroad in search of monsters to destroy, unless the monsters in question kill a suitably large number of Americans. That's why FDR, Dean Acheson, and people of that ilk offered a prayer of gratitude for Josef Stalin six decades ago, and why the likes of Rick Santorum are praying for Jihadists to strike today.

*I do not want to leave the impression that Churchill himself was an entirely commendable figure.

I want to express my earnest gratitude for the prayers, kind wishes, and generous help provided to my family in recent days. You have blessed us beyond measure. Thank you so much, and I will keep you apprised of Korrin's progress.

Deferring to the good folks over at Freedom's Phoenix, I happily point out that the wise and distinguished Dr. Ron Paul is emphatically not among those Bush-bot Republicans eagerly hoping for a politically exploitable terrorist attack. Dr. Paul's party affiliation is Republican, but as he points out he is a Republican of the Robert Taft persuasion, rather than a curdled, petty militarist of the sort so commonplace in today's GOP. My deepest and most sincere apologies for leaving the impression that I consider Dr. Paul to be in any way similar to the likes of Rick Santorum and Dennis Milligan.

If you will permit a little schadenfreude, I'm glad that Santorum lost his bid for re-election. After caving on the pro-life issue by supporting Arlen Specter instead of Pat Toomey, he deserved to lose. Additionally, he's a warmonger, so we win twice by him losing, eh? (no, I'm not a Canadian, you hoser. And this may be a duplicate. If it is feel free to remove it.)

Now if only we could convince the "christians" of what you said mister spock:-( They think that Rick's "Islamofascists" are going to come here[oh no they are here!] and slit their throats at night. Trust in the Lord, no they don't.

I've given up on this country, if it even remains one into the next decade.

I'm a hardcore cynic and have been for some years already and will be forevermore in this life distrustful of virtually anyone and everyone who plays in the political arena. Ron Paul is the sole exception right now and he just ain't gonna make it, given the electorate's collective mindset about many issues, but one especially above all else: dependency.

The dependency disease, made so paramount today by the populace having become greedy and thereby risk-averse, is ravaging all levels of the socio-economic scale - from corporations (doh!), small business, parents, churches, state and local governments, the middle-class (many of these are small business owners), and the genuine, bona fide poor, of course.

Dependency also is what creates high prices by artificially creating demand in various markets that otherwise would not exist. When folk don't have to pay out of pocket for services or goods, they greedily procure them. Health care, anyone? Food, petroleum, etc. are all affected by subsidies or outright giveaways at another's expense.

That's what's going to inevitably wipe out real freedom completely, Will, long before terrorism, real or imagined, can possibly manage it. When most folk depend on government for their livelihood to any degree, who needs terrorists to cow and regiment the masses?

The GOP isn't "praying" for a terrorist attack at all, not by a long shot; it is actively working to make it happen. Mark my words, within the next eighteen months, probably in the three-month period leading up to the next presidential election, an "incident" will occur somewhere on U.S. soil that will be seized upon to justify the elimination of what little remains of constitutionally-based republican government. And of course the Amoricon masses will gladly cede what few pathetic "freedoms" they have left to Big Brother George and company, accompanied by cries of "Save us, oh Great Decider!" The suspicous timing of the event (one that, on close examination, will certainly prove to not have anywhere near the impact of the events of 9/11, even these having had microscopically minimal real impact on the nation's economy or security infrastructure) will of course never register with these brainless creatures, nor will the transparently incongruous "official" explanations of the events that will surely follow. No, Faux News, the Washington Times, and their fellow neocon propaganda organs, successfully pitched to the clueless koolaid drinkers as "objective alternatives" to the liberal-dominated established propagandists, have done their jobs too well, having cultivated the compliant, GOP-worshiping mindset that was the primary goal of the ruling cabal all along. With the exception of that tiny fragment of the nation that still values liberty, the full-scale tyranny that follows the next staged "terrorist" attack will be greeted with applause, not apprehension.

Staged attack it will be. Or some other contrived excuse overseas to roil the ignorant masses. I've already heard several people quoted as saying that "something" might happen this summer. Really? Just how is it that so many are speaking suddenly off of the same script? Coincidence its not.

Dixie... You're a cynic? Say it isn't so! LOL! I'm with you and everyone else who views politics with a cynical eye. Paul is an example of a man I believe God raises up, as a reminder, so that people can make no excuse about whom they really desire to serve. They can choose to look good in the eyes of man, to be like the other nations, thus voting in someone "electable", as defined by the current corrupt crew, or make a principled moral stand regardless of what the mindless herd clamors for.

I have little faith that people will do anything but choose for themselves a "king". Some things never change.

Paul is an example of a man I believe God raises up, as a reminder, so that people can make no excuse about whom they really desire to serve.

Always good to see, even if it's residual, humor in politics as with anything else, I suppose ;).