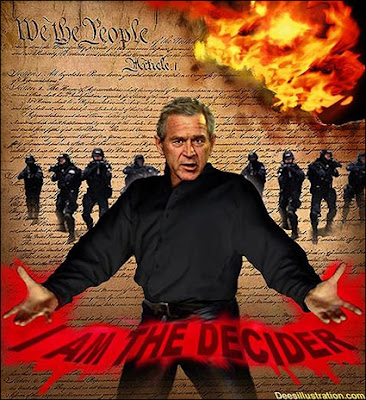 "We are in danger of having ... a Weimar moment in our politics. German politics was embittered disastrously by the belief that they were on the cusp of victory in 1918 and were stabbed in the back by the civilian leadership that didn't understand Germany's military prowess. There is a constituency in this town that believes we're winning in Iraq, that we have at last figured it out, that the indices of success are there. And if we pull out and have the kind of disastrous consequences, telegenic disastrous consequences, or could have, we're going to have people saying, `We had it won and threw it away.'" --

George F. Will to George Stephanopolous, "This Week," July 15


Shortly before the last election (if that term can be used to apply to a selection process involving two entirely interchangeable contenders), the witty and perceptive Charles Featherstone offered his own warnings about the Weimarization of American politics:

"It is common currency among many committed Republicans that Democrats know nothing about the military and are simply incapable of commanding it properly. America needs a strong Commander-in-Chief, and a wimpy, wussy Democrat more worried about day care, health care, hair care and [illicit assignations with interns] is simply incapable of issuing orders that generals and admirals will respect and obey. Bill Clinton tried to prove otherwise, but his handful of wars and his recreational activities have, I fear, simply reinforced this notion among the Red State Party Faithful.

So, if Kerry [or another Democratic successor to Bush] presides over a withdrawal from Iraq – even the same withdrawal that Bush would have undertaken in virtually the same way – be prepared for the big lie, a "stabbed-in-the-back" theory that will bitterly and angrily poison American politics and society, likely worse than post-Vietnam recriminations damaged our national politics.

Expect to be told – to be lectured and hectored – that were it not for likes of us, for dissent, America would have won, if we had just been as united as we were on September 12, 2001.

Never mind that there was no winning.

During the First World War, the German Imperial government imposed very strict censorship on battle reports. Many at home in Germany had no idea how badly things had gone for the army during the last three months of fighting in 1918. That, combined with the abdication of the government which had waged the war and thus was unable to take responsibility for losing it, allowed an exceptionally poisonous lie to take hold: the `November Criminals,' the socialists and Jews who supposedly sold the nation out, who stabbed in the back and defeated an army that was not beaten on the battlefield. That lie, and the hatred and mistrust it engendered within German society, made it virtually impossible for Germans to govern themselves effectively during the 1920s.

And we all know what that eventually led to."

Even more ominous still is the fact that in terms of the consolidation of power in the presidency, the real "Weimar Moment" happened last October.

Please forgive the skimpiness of this offering, and expect a lengthier and more fully realized essay as soon as conditions permit.

I offer my deepest and most earnest thanks to the people who have made some incredibly generous donations to me and my family. Your kindness, I am not ashamed to admit, has literally left me in tears. I would ask for your continued prayers on behalf of Korrin, who remains hospitalized and is not making any improvement.

Thanks again. God bless all of you.


Please be sure to visit The Right Source and the Liberty Minute archive.
at 9:45 AM

You're a good man, Will. Thanks.