How I Spent My Sommerferien 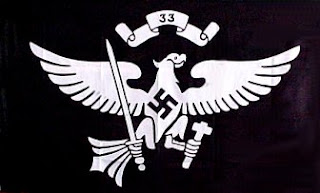 This summer vacation has been the best ever! I'm so grateful to the local branch of the Heimatsicherheitsdienst for letting me attend the Junior Police Academy.

Things are looking pretty tough for the economy, and I'm sure that by the time I graduate from High School jobs that pay well will be pretty scarce.

Since I've got no particular interest in dodging IEDs in Iraq, the military doesn't seem to be a good career option. But this police gig seems pretty promising. For one thing, when the police in this country kick in a door at 3:00 a.m., the chances are pretty slim that they'll be targeted for retaliation. And when you work for the police, "officer safety" is the highest priority, even if it means that the police arrive long after the shooting has stopped. 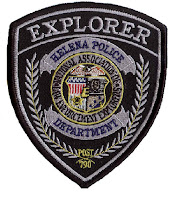 Since a lot of departments are spending money (doesn't some of it come from Washington?) to promote Junior Police Academies and Police Explorer programs, police recruits seem to be in demand, and job security looks pretty good. In fact, one of my instructors pointed out that law enforcement opportunities will probably expand as the economy gets worse! 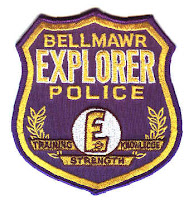 They let me wear a really neat uniform, and told me how it would set me apart from everybody else.

Just think: When I'm wearing the State's uniform, I'm essentially untouchable -- literally: Any common citizen who touches me in any way can be charged with "aggravated battery." I can demand to see anybody's ID at any time, and arrest those who refuse to show me their papers; in fact, I can even arrest those who cooperate, if they ask to see my ID. And if someone tape-records me during the performance of my duties, I can arrest him and charge him with a felony! How kewl is that? 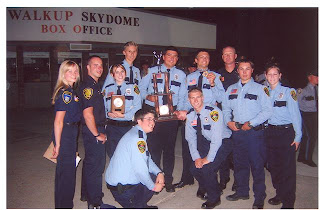 Police work is said to be dangerous, but don't worry, Mutter und Vater. There are some really bad criminals out there, and some of the older police officers still have the idea that our main job is to protect the public from people like that. Pffft. Those guys will retire pretty soon. And under the new Schlag und awe approach, the police will use military tactics against anyone who resists their commands -- ordinary citizens in most instances, not hardened street criminals. Once again, "officer safety" is the prime directive. 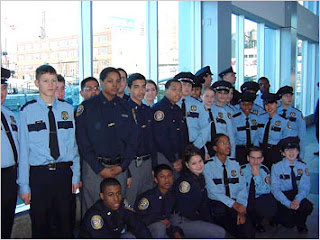 If I injure or even kill someone who isn't qualified to wear the uniform, I'll get the benefit of every doubt, and a panel of my co-workers will probably determine that I acted according to established policies.

Heck, as a policeman, if I gun down some unarmed guy who was mentally incapable of following my instructions -- or even if he was following my orders, and I was the one who goofed up -- chances are I'll either be completely exonerated, or suffer a wrist-slap faint enough to be all but undetectable.

As a cop, I can put a lethal chokehold on a small adolescent girl, or kill a guy with an 84-second Taser blast, or even be caught on video shooting some guy in the head for no reason -- and not have to worry all that much about the consequences.

After all, I'd be part of the Thin Blue Line, the living barricade protecting civilization from barbarism -- so the rules wouldn't apply. All that matters is "professionalism." 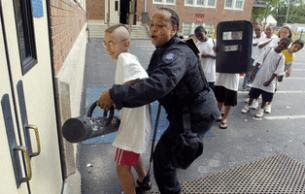 Some of my friends got to practice "dynamic entry" tactics with people from the local SWAT team. Others were given tours of the latest military hardware the department received through the Pentagon's LESO program. I got to take a ride in a Peacekeeper vehicle, which just totally pwns! A group of my friends got to help the regular police conduct checkpoints for seatbelt and DUI enforcement.


From what I've heard, there's a lot of funding available for this kind of thing, and checkpoint duty is choice: You just set it up and watch the money roll in. I'm surprised that this kind of thing is legal -- and that people will put up with it. But it must be all right, or else the government wouldn't do it ... right? I'm sure that my life will never be the same after spending a summer as part of the Heimat Youth.


I heard all kinds of interesting things about how the war on terror will mean some really important changes in how we live, and how the police will play an important role in these changes.


This is not to say that everybody understands what's happening. There is this one kid who seemed to think it was wrong for local police to get money from Washington, as if that were somehow important. And when somebody pointed out that fighting terrorists sometimes means using their methods, this kid said: "Wasn't the credo of the German S.A. `Terror must be broken by terror?'"


"Hey, that sounds about right," our instructor replied.


But what does that dweeb know -- he's home-schooled (weird!) and I hear his parents support that Ron Paul guy. I don't know what somebody like that guy was doing in the program to begin with; I think his parents were brought up believing that citizens should "support your local police," which is good, but they apparently don't understand that the police are part of a national homeland security effort now. People like that seem all right at first, but they always end up undermining our efforts in the end.


I'm pretty sure that by the time I'm ready to work in law enforcement full-time, we'll be able to take care of people like them.


All hail the Heimat!


My sincere thanks to all who have offered prayers and concern on behalf of my wife Korrin. Your kindness and generosity have been an immense blessing to our family.

Korrin is in the hospital again. Her condition began to deteriorate severely about two weeks ago, and she reached a point of crisis on Tuesday. She was a little better yesterday, which gave me some transient hope that hospitalization wouldn't be necessary, but now we're looking down the barrel of what may be a long and trying ordeal -- for Korrin most of all, of course, but for our five kids as well.

Thanks again for your love and concern, and your many acts of generosity. Just as I will never be worthy of the wonderful wife God gave me, I'll never accomplish anything to merit the friendship and kindness I've received from you. God bless you all.

Make sure to check out The Right Source, as well

as the Liberty Minute archive.
at 1:40 PM

I disagree. You deserve far more than the lot you've come into.

Oh, and thanks for the article. It reminds me of some folks I know. But don't think for a minute that home schooling prevents people from falling wholeheartedly into things like Police Explorers...

>I disagree. You deserve far more
>than the lot you've come into.

That's right. I don't know much about You personally, Mr. Grigg, but Your passion and devotion to Liberty is inspiring. It's truly a shame that Your contry doesn't have more people like You: who are willing to sacrifice their time, energy and a lot of their nerves to hammer away at injustice and cruelty.

I wish You and Your wife all the best. I hope everything turns out all right.