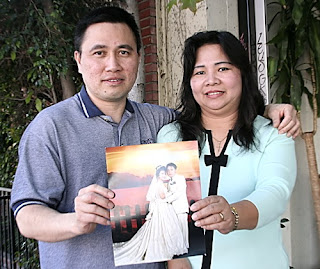 Stories like the following make me wonder why we don't simply defer to the prevailing reality, change the name of our country to the United Soviet States of Amerika, and be done with it.

Raymond Soeoth is a 38-year-old Chinese Christian pastor from Indonesia, the world's largest Islamic state (in geographic terms). In 1999, Soeoth and his wife fled that country to escape religious persecution. His application for asylum was denied. He was incarcerated at a federal detention facility in San Pedro, California while he appealed that decision.

On December 7, 2004, Soeoth was told by the Department of Homeland Security (specifically, the directorate for Immigration and Customs Enforcement, or ICE) that he was to be deported. He was not given time to contact his wife or attorney. Asked how he felt, and if he wanted a tranquilizer, Soeoth replied that he was all right and didn't want to be drugged.

A few hours later, the Heimatsicherheitsdienst dispatched several agents to Soeoth's cell. The terrified pastor was informed that he was to be medicated without his consent. Several of the heroic tax feeders seized Soeoth, forced him onto a bench, crudely violated him by pulling down his pants, and injected him with Haldol, a powerful (and dangerous) anti-psychotic medication. (He was also given Cogentin, which is used to mitigate the spasmodic effects of Haldol.)

Federal officials claim that Soeoth had threatened to kill himself if he was deported. Haldol is occasionally used to treat people suffering from a suicidal psychosis, but this can only legally be done involuntarily after a medical examination and pursuant to a court order. None of this happened in Soeoth's case; he was simply drugged for the convenience of the Heimat agents in charge of expelling him to Indonesia.

After being forcibly drugged, Soeoth was dragged to the airport by a detachment of Heimat knuckle-draggers. Because the ICE officials hadn't bothered to arrange proper clearance, however, airport security officials refused to let Soeoth and his abductors board a plane. He is currently free pending his legal appeal.

Similar treatment was inflicted on 31-year-old Senegalese immigrant Amadou Diouf, who came to the US in 1996, overstayed his visa, married a US citizen and was involved in a protracted legal controversy over his immigration status. In February 2006, Heimat agents took Diouf into custody and informed him that he was to be deported, despite the fact that a judge had granted him a stay of deportation.

Diouf was handcuffed and bundled onto a Sengal-bound flight with a Heimat-appointed “medical escort.” A literate and educated man, unlike most of the hairy-knuckled mouth-breathers in the Regime's employ, Diouf told a flight attendant in French that he wanted to speak to the captain. Something triggered the “escort”'s suspicion. He berated Diouf for “not following orders,” and with the help of another goon he grabbed Diouf and shoved him toward a lavatory.

“He took the bag out, and he took out the syringe,” Diouf recounts. “At that point I knew that, you now, they're going to sedate me.... I refused to get inside the lavatory anyway, and I was pushed to the back and wrestled to the ground.” At the next stop (the accounts I've read don't say whether the flight was diverted), Diouf and his captors were kicked off the plane by orders of the captain. As they departed the aircraft, Diouf's legs were so unsteady as a result of the drugs that he fell down the stairs and landed in a heap on the tarmac.

Neither of these men had a documented history of mental illness. Neither was under the care of a physician or subject to a court-ordered psychiatric “hold.” Neither was accused of committing crimes against persons or property. Both of them were pursuing legal appeals that may have been successful.

After violating the individual rights and personal dignity of Soeoth and Diouf, Homeland Security officials have suddenly become scrupulous about the “privacy rights” of their victims – for obviously self-interested reasons, naturally.

ICE spokesdrone Marc Raimondi told the AP that the “privacy rights” of detainees prevent him from discussing these specific cases – despite the fact that Soeoth and Diouf have gone public with their stories. He said that a “public health official” assigned as an escort “decides what care and medical treatment occurs” during deportations.

It's important to recognize that this “public health official” is not there to act in the best interests of the detainee, but rather to carry out the wishes of the State. This reflects what has been called the “veterinary ethic,” and that moral perversion of the medical profession is actually very widespread.

The ACLU of Southern California – which is not my favorite organization by any means, but credit should be given where it is due – points out that a 1990 Supreme Court ruling established the principle that psychotropic drugs cannot be used on those who have not been diagnosed with a mental illness. Additionally, the group points out, ICE's own detention standards dictate that medication “shall not be used to subdue an uncooperative detainee for staff convenience,” which was the obvious intent in the cases of Soeoth and Diouf.

“It is inappropriate to give these kinds of injections and put people on aircraft in violation of the federal air regulations that prohibit the transport of drugged individuals,” observed Columbia University Professor Abraham R. Wagner. Paul Finkleman of Albany Law School pares the matter down to the core: “If you are using anti-psychotic drugs as a means of controlling people who do not need to be controlled, then the medical people are violating their own oaths as physicians and nurses and violating federal law by administering these drugs.”

Dan Kowalski and Sandra Saltrese, immigration attorneys from Arizona and Colorado, respectively, told the Los Angeles Times that the forcible sedation of non-violent deportees has been quietly practiced for several years. “Because the subjects are not citizens, they are fair game for abuse and mistreatment,” Kowalski contends.

This kind of mistreatment is not limited to immigrants and refugees, although they are particularly vulnerable to it. Innocent male inmates of our government mind-laundry system are frequently medicated against their will as a penalty for being caught behaving like young males; there are cases on record of reluctant parents being threatened with child abuse or neglect charges if they resist on behalf of their children.

Former Soviet dissident Vladimir Bukovksy (who, God bless him, pointedly warned the United States against becoming a torture state) has described how, shortly after he and some other nonconformists were consigned to the Soviet psychiatric gulag (psihuska), a State-appointed psychiatrist "tried to prove to us that we really were crazy: first, because we had come into conflict with society, whereas a normal person adapts to society; and second, because we had risked our freedom for the sake of stupid ideas, neglecting the interests of our families and careers.”

"This ... is called an obsession with self, the first sign of a paranoid development of the personality,” insisted this “public health official.” Bukovsky – a particularly recalcitrant case – was subject to a steady barrage of hectoring questions posed by a long train of doctors and other interrogators:

"Why was I in conflict with society and its accepted norms? Why did my beliefs seem of overwhelming importance to me -- more important than my liberty, my studies, or my mother's peace of mind?"

Most detainees in the psihuska broke down very quickly under such treatment. Those who resisted were routinely beaten as a way of straightening out their thinking. Bukovsky describes how one inmate, after being viciously beaten, was given a medical exam yielding a report claiming that his severe injuries were evidence that he had "become violent"; he was prescribed "injections of sulfazine or aminazine” for his non-existent mental disturbances.

ICE's Soviet-style treatment of Soeoth and Diouf also illustrates a point I've made before: The architects of our emerging Garrison State are exploiting public concern over immigration to develop and perfect instruments and procedures that will be used against all of us, should their designs reach fruition.

Oddly enough, that point is made quite compellingly in this film clip from the otherwise undistinguished sitcom Just Shoot Me (the clip does feature the immensely talented Steve Carrell):

Please be sure to check out The Right Source.

I have for some time now been an enthusiastic follower of your writing and infrequent contributor to the comments section here. I have been contemplating how best to compliment your work, which I fnd absolutely sterling in every regard. It occured to me lat night the best possible compliment I can pay: Your writings, sir, stir in me the true patriots's heart and make me long for armed insurrection. Cheers,

The pastor should have just crossed the Mexican border, then we may have lavished him with the tax payers' largess, or rather the largess of those generous with other people's money. Perhaps if the pastor was a drug smuggler or rapist or terrorist he would have had better luck. Under the right circumstances, peradventure, he may have sued the border patrol for shooting him in the ass and won. This country didn't deserve the pastor.

Its ironic that illegals will pay thousands of dollars to enter the US "illegally" but those that try to do "the right thing", and at substantially less money, albeit still expensive, and face ridiculous hurdles and hoops to jump through. That was the case for my wife, a Japanese national and now US citizen, but you'd have thought with how we were treated that we'd busted through the border.

This entire article did remind me of Bukovsky even before his name popped up later on down. It also reminded me of the Soviet sub that sank and how, during public hearings later, that an angry mother was forcibly injected to "sedate her" (later video clips would show someone giving it to her).

We need to deport these people now. I am not interested in their sitution, they were under deportation order and they should go. I am only concerned that we get them out of this country and back to their home country. They were denied asylum and thus have no right to be here. They should NOT be allowed to continue with endless legal appeals and tie up the courts -- DEPORTATION NOW.

I think it's bullshit that as a christian minister, he FLED from "religious persecution"??????
Should a minister flee while his/her flocks of sheep are still in the area where persecution is prevalent?? well my parents are still in Indonesia and many more Christians, they never intended to go to another country and apply for an asylum (to live a "safer" life). To be honest, I am not sympathetic to Raymond! and now he's SUING!! drop the christian name, Raymond, and don't embarrass other Christians in Indonesia: We're still here in Indonesia! you should be ashamed of yourself since you wore that label "a minister."