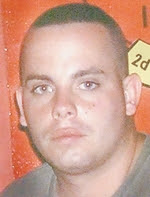 Sgt. Derek Hale, in Iraq serving the Regime that would later murder him.

Delaware's Attorney General is Beau Biden, who issued from the loins of Senator Joseph Biden -- serial plagiarist and democratic presidential aspirant. Beau Biden's office is presently defending the ten-man police squad that murdered 25-year-old Derek Hale, a retired Marine and Iraq combat veteran, last November 6. It is also presiding over an internal investigation of the incident, in which Derek -- an unarmed man, a stepfather to two young children who had just celebrated his first wedding anniversary, a veteran with no criminal record -- was repeatedly shot with a Taser and then gunned down at point-blank range as a young mother and her two children screamed in terror.

For those of us not born into the ruling elite, this arrangement is clearly a conflict of interest. For those in the tax-devouring class, however, this is standard operating procedure.

A week ago, Biden's office conferred its blessing on the execution-style slaying of Derek Hale, claiming that the writhing, incapacitated ex-Marine “`appeared defiant and menacing' while ripping Taser barbs from his chest, and jumped to his feet `in a hostile manner' seconds before he was shot and killed,” according to a nine-page report.

Two days before Hale was killed, the house where the crime occurred was raided by police, who allegedly seized cocaine, firearms, and dynamite before arresting the homeowner (who was in the middle of divorcing the mother who witnessed Derek's murder). It is possible that the police believed Derek and his friends were somehow involved in removing or concealing evidence, although why they would do so after the home had been searched and raided is difficult to understand.

At the time Derek was gunned down, there were no warrants out for his arrest. He was officially regarded as a "person of interest" in a narcotics investigation. This means he was an innocent bystander, rather than a suspect, as far as any criminal inquiry was concerned.

Scene of the slaughter: Fred Mixson, an eyewitness to the murder of Derek Hale, stands on the steps where the victim was killed.

For reasons yet to be explained, the unarmed ex-Marine on the porch of his friend's house in Wilmington was surrounded by at least ten (and as many as fourteen) heavily armed police, at least one of whom had threatened an eyewitness who protested after Hale had been hit with several Taser blasts. Eyewitnesses testify that Hale was left paralyzed and helpless, wallowing in a puddle of his own vomit. They report that Hale's first reaction was to urge the police to get the children -- who were sharing the small porch with him -- to safety. They also recall Derek repeatedly attempting to comply with police orders to remove his hands from his pockets, but being unable to do so.

It's not surprising that Derek was paralyzed: A post-mortem found that he had been hit with seven Taser blasts in the space of 73 seconds. Two officers were involved in the Taser barrage, which the AG report insists was actually an act of, you know, compassion: "[T]he purpose of the Tasering was to overcome Derek Hale's resistance to the arrest so he could be taken into custody without injury to himself or to the officers."


And how dishonest: Eyewitnesses on the scene testified under oath that Derek didn't resist arrest -- since he was Tasered within seconds after the cops arrived.


The coroner claimed that none of the three Taser barbs found in his shirt directly contacted his skin. Yet the same report claims that he was "quivering and convulsing during the shocks"; since he was sitting on a porch within easy reach of the officers on the sidewalk, it would have been relatively easy for ten of the tax-fortified heroes on the scene to swarm him and take him into custody.

Ah, but this would have involved risk, and for those who wear the State-issued costume of law enforcement, the prime directive is "officer safety."


(This is a largely generational thing, in my view: Many officers within a few years of my age -- 44 -- tend to be more intrepid and willing to run necessary risks to minimize the danger to civilians.)


According to the State AG's report, Hale “continued to keep his hand in his pocket as if holding a weapon and turning in a threatening manner toward a nearby officer armed with an empty Taser."

Leaving aside the report's melodramatic and self-serving language, this version actually confirms the eyewitness account that Derek, paralyzed by repeated Taser strikes, was unable to remove his hand, and was thrown helplessly to his side.

As the AG's office tells the story, Derek shrugged off seven electric charges, ripped the barbs from his clothes, and stood up in a threatening manner. This account is contradicted by the sworn testimony of eyewitnesses who, unlike the police, don't have an interest in justifying the needless killing of an unarmed man. (It's odd that the police account left out the part where Derek's eyes became yellow, his skin turned green, and his rage-distended musculature reduced his clothing -- except for his curiously adaptable pants -- into easily discarded rags.)

The official report claimed that because of Derek's “menacing” behavior, the officer who had tased him seven times “believed he was in immediate danger and, thus, began an evasive move. Lt. Brown believed that the use of deadly force was immediately necessary to prevent serious injury or death to that officer.” A second officer was preparing to gun down Derek when Lt. William Brown shot the victim.

It should be repeated that Derek was surrounded by heavily armed cops and within easy grabbing distance. “Deadly force” was never necessary if arresting Derek was the objective. And why were the police willing to let the lead fly when there were three civilians – a mother and two young children – within the potential line of fire?

The only suitable answer is cowardice. The reflexive, irrepressible cowardice of natural bullies.

The police had the advantage of numbers and firepower. Their subject had been under surveillance for days; he was clearly not a threat. He had been Tasered seven times when Lt. Brown pulled the trigger.


And still these valiant defenders of the public weal were frightened, their adrenal glands working furiously and their bladders slackening at the thought of actually having to lay hands on a solitary "defiant" subject.


"Oh dearie dear," one imagines Lt. Brown fretting, "he might be armed. If we try to take him into custody, one of us might be hurt! That's too risky; our only safe option is to let the lead fly. Sure, there's an innocent mother and two small children nearby, and they might get hurt, but they're mere mundanes, so I guess it sucks to be them." 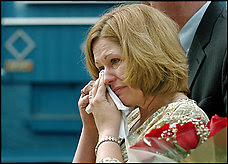 Attorney Thomas Neuberger, who represents Derek's widow Elaine in a lawsuit filed against her husband's murderers, suggests that voters should recall Beau Biden. That's a good start. I'd recommend following up with some form of public censure involving the use of stocks and a large supply of rotten fruit and dead cats.


"This is a shameless coverup because the use of deadly force was not justified," Neuberger contends. "Fourteen heavily armed and trained police officers should be able to arrest a citizen without killing him after they have Tasered him seven times and he is laying in a pool of his own vomit."

I will be on the road tomorrow, headed for California to speak to the United Republicans of California. So it may be several days before I update this page.

Meanwhile -- The Right Source will continue to be updated regularly.

I'm ashamed. As God is my witness, I will never again casually claim to have ever been in law enforcement, for fear I'll be associated with the likes of this.

Please see www.bollyn.com to learn of the strikingly similar case of Christopher Bollyn, an internationally acclaimed investigative reporter and author, who may very well have been killed also, but for the fact that his wife had a camera and was trying to take photos (she was illegally prevented from doing so) of what was transpiring. Mr. Bollyn' vicious police attackers went into immediate cover-up mode by arresting him on the spot and falsely charging him with resisting arrest and aggravated assault on a police officer. Please support Mr. Bollyn in any way possible, including prayers, of course. The prosecution has offered Mr. Bollyn a deal of dropping the criminal charges if he agrees not to sue the police. Rightly and courageously he told them to take a hike. No deals! He is scheduled to go to trial on May 31, 2007.
Signed: James B. Phillips

A heart-breaking story if it involved any human being... All the worse when you consider it involved a father. Nearly criminal when you realize it involved a former soldier who served this country. So much for civilization. Thanks for sharing.

This was murder, premeditated, calculated and carried out by the thugs of America's largest street gang.

Just found out about this story a month ago. Went and read every single thin I could about it and paid a sticker shop to give me "Remember Derek Hale, Remember Russell Doza and James Hicks" stickers for my helmet for the bike. Tell every person I can about this travesty. How pathetic that there is only 4, FOUR comments on this??? Just another reason we will all live under a total police state within ten years.