Because They Can: The Logic of the Torture State 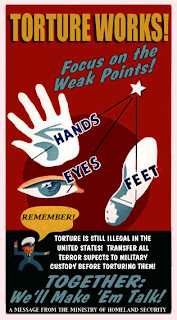 That profane outburst fell from the lips of Pfc. Damien M. Corsetti -- aka “Monster,” aka “King of Torture” -- as he straddled a helpless Saudi detainee in a Soviet-constructed Afghan prison. Corsetti had just threatened to rape the detainee, and the supposed deity he referred to was the appendage with which he would commit that act. At the time, said appendage was pressed against the prisoner's face.

So – at the time of Corsetti's trial a year ago, the assumption was that sexual assault was considered a permissible interrogation tactic in the absence of a specific prohibition. He'd used the tactic before while working at Abu Ghraib: With the help of two comrades he forced an Iraqi woman to strip.

Why did he do this? Because he could.

There was no “rule”against it, after all – apart from the law written on the heart by the Creator, that is. But Corsetti, as we've seen, had his own theology. And because he was permitted by his superiors to ignore the moral law, Corsetti finished his military career with an “honorable” discharge.

He has since disappeared from public view. To me it seems likely he found a career in law enforcement, like his fellow torturer Samuel Franklin.

Franklin's five-man crew included three other full-time law enforcement officers and a part-time process server. This squalid little gang was created with the help of a federal Byrne Grant (a Justice Department subsidy for counter-narcotics programs), and – like most criminal cliques of that sort – they were involved in a vulgar shakedown-and-skimming operation conducted under the color of government authority.

Eugene Siler and wife (below)

Franklin's squad descended on Siler's home on July 8, 2004 on the pretext of serving a warrant for probation violations. Their real objective, however, was to rummage through the home in search of either money or contraband that could be used to justify seizing and forfeiting Siler's assets. The police ordered Siler's wife to take their son and leave; before doing so, however, she turned on a tape recorder, which captured roughly half of what turned into a two-hour torture session.

Detective Franklin, a 17-year veteran of the Campbell County Sheriff's Department, was also the DARE officer at the local school district. Bear that last fact in mind as we examine his conduct. 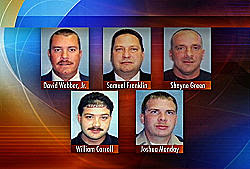 “Let me tell you what we're gonna do,” explained Franklin, the moral tutor to Campbell County's youth, as Siler – who had already been beaten once – cringed in terror. “We're gonna put them handcuffs in front of ya. Cut you a little slack. But if you don't start operating [sic], we're gonna put the motherf****rs behind your back , and I'm gonna take this slapjack and I'm gonna start working that head over, you understand?”

Incidentally, the “consent form” the officers sought to torture Siler into signing stated, inter alia: “This written permission is being given ... knowingly and voluntarily to the aforementioned officer of my own free will and without any threats [or] coercion....”

In Bagram, Private Corsetti's appetite for sadistic cruelty gave other interrogators leverage to extract confessions from detainees. Detective Franklin's squad used the same tactic, although it's not clear which of them was the designated “heavy,” or if they traded off playing that role.

At some point, 24-year-old Rookie Deputy Joshua Monday joined in the merriment, beating and taunting the handcuffed victim.

“It's gonna hurt worse,” Detective Franklin snarled at Siler. “It's getting worse.” As the victim persisted in refusing to sign the consent form, Franklin compounded the torture with threats against Siler's family: “If you don't sign, I'm gonna go right back there where your wife's at, and I'm gonna put her a** in jail. I'm calling the Department of Human Services and I'm gonna take your f*****g kids from you today..... I'm gonna slap the hell out of you till you damn bleed, so sign it.”

This went on for at least an hour: five grown men taking turns beating and taunting a terrified, illiterate, handcuffed man – a convicted drug peddler on probation, yes, but a human being and an American citizen whose rights are still protected by law.

And the torture eventually escalated to death threats:

“[I]f you don't sign it, you probably won't walk out of here,” warned Officer Webber.

“Shoot his f*****g a**,” Green later said in disgust, and at one point Deputy Monday threatened Siler with a gun:

To Officer Webber goes the distinction of suggesting the sexual torture of the recalcitrant suspect:

“[T]hem batteries right there, I'm fixin to go out there and get some wires and hook 'em up to your f*****g balls. And if you don't think I will, you don't sign that form and watch what happens.”

After Siler had endured a prolonged beating (and, apparently, sexual torture through electric shock), Detective Franklin suggested releasing him from the handcuffs -- “that way if he raises his damn hand to one of us, we have the right to beat the f**k out of him.”

What a brave guy -- the very embodiment of the phrase "Good enough for government work."

A little later, Deputy Monday suggested that they should murder Siler and frame him for armed assault using a pellet pistol found in his home:

When that didn't work, the gang dragged Siler off for a few rounds of water-boarding.

Surely it wasn't necessary to beat, abuse, molest, and terrorize Siler in order to find a pretext for searching his house. So why did Franklin and his gang do so?

As I read the transcript, and saw how young Deputy Monday emerged as the most violent and sadistic of the officers, I made a small bet with myself that he was the first one to break when the FBI conducted its investigation of Franklin's squad.

I won the bet: Monday broke right away, and began “cooperating” with the inquiry. All five are now in prison.

But the only reason this happened is because Siler's wife had secreted a tape recorder where it could gather evidence, and had the presence of mind to turn it on before leaving her husband in the hands of his torturers.

How often does this sort of thing take place undetected?

Detective Franklin's little gang, remember, was funded by the Federal Government through a Byrne Grant, and the purpose of squads of this sort is to rack up statistics that can be used to get bigger grants. That's why Franklin and his cohorts were so adamant about extorting money from Siler.

Siler himself was a small-time crook of little consequence, but I will say this: By his refusal to relent under persistent torture and death threats – as well as threats against his family -- he proved himself to be more of a man than any government employee I've ever met.

Revelations about Siler's torture at the hands of federally funded drug cops lit up the blogosphere a couple of years ago. It's worth reviewing that atrocity today in light of the fact that a couple of weeks ago the Feds and their local franchisees conducted “Operation Byrne Drugs II,” a 36-state shakedown in which all of the familiar spots were raided, the usual suspects were rounded up, small but superficially impressive amounts of drugs and drug profits were drawn out of the vast and eternally self-replenishing ocean that is the underground drug economy, and self-congratulatory press releases were issued by everyone involved in the exercise. 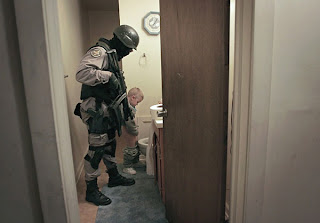 Just another day in the Land of the Free: A SWAT operator takes time out of a narcotics raid to escort a kindergarten-age child to the bathroom of his own home.

Does anybody doubt that somewhere, someone involved in “Operation Byrne Drugs II” -- acting in the serene confidence that his acts enjoyed the blessing of the State, and would never be made public – beat, tortured, and otherwise terrorized some inconsequential figure, just because he could?

Make sure to visit and bookmark The Right Source for freedom-centered news and commentary.

That picture with the kid urinating could be the new Norman Rockwell.

It appears that Det. Franklin's TV hero is Vic Mackey fron the FX series "The Shield". Will, was the victim in this case able to sue the local municipality for a butt-load of money and if so, was the suit successful? If nothing else, hit'em in the wallet. The payout of a substantial amount of cash may be enough of an incentive for that municipality to keep their officers' leashes reigned in a little tighter. BTW, how did the police review go with your dog?

Cap'n, I had the same impression that Franklin and Co. were posing and posturing as if they were doing a Stake Roadshow production of "The Shield." (For those who don't know what a "Stake Roadshow" is -- count that among your larger blessings.) Siler did file a lawsuit -- something on the order of $19 mil, I think.

Oddly enough, it's been a week since the She-Police was supposed to do a follow up visit to inspect our dog, and she's not materialized.

Perhaps she decided it the better option to not return following the conversation that you had with her. Perhaps she has more intelligence and common sense than you are giving her credit for. Perhaps she found someone else more entertaining to press the weight of the State upon. (Apologies to J. Stalin)

That picture of the kid in the restroom raises an interesting question. Just what in the world are they doing with automatic rifles around kids? Hmmmm? Seems they'd have staked things out ahead of time and known who would be around... but obviously that would mean giving a damn.

With the current culture, none of this is surprising. It's not like commoners who just happen to become cops suddenly morph into torture sadists "just because they can."

No, it's because their minds were already corrupt and so, by migrating into a position of authority, the corruption coarsened to the point of exhibiting this kind of conduct, naturally, "because he could."

The use of "because he could" would actually reinforce the statists in the media and elsewhere who claim that we need restrictions and "controls" applied to us. I know you didn't intend that kind of interpretation, since this was about State agents specifically, but it nevertheless supports the notion that folk are indeed rudderless and only know what kind of conduct is right or wrong by what is labeled legal or illegal.

That said, this kind of police conduct should be the last straw that makes the commoners in that county, or anywhere else this crap goes on, rise up in righteous indignation and demand that their county shut off the subsidy spigot and demand the paladins be accountable to the locals. Oh wait, the commoners themselves drink from the same spigot. Oh well...sigh.

Why couldn't this be handled by the TBI instead of the FBI? Well, whatever, it makes no damn difference either way; it's like having tigers (feds) or lions (state) investigate and prosecute the local leopards (county mounties). They're ALL high-order predators.

Right on, DD........."So however the culture molds and shapes the ruled, so shall it also mold and shape, even more coarsely, the rulers [or authority figures, cops] who spring forth out of the ruled."

I was leaning back for a bit trying to choose my words when I remembered yours.

More deviant and violent behavior is yet to come. And not only from alleged authority figures.

Powerful and disturbing evidence, Will. I listened to it all.

The photo with the little boy in the bathroom is probably more accurately titled "Paramilitary Thugscum Pig Predator Prepares to Molest Its Prey." Given the utterly inhuman disregard for life, limb, liberty, and property that these animals routinely exhibit in their interactions with (and depredations against) the citizenry, does anyone really believe that these sickening vermin are above paedophilia as a means of torture?

Strong words? Absolutely. But what emotion other than pure revulsion do this whole sordid scenario arouse in a normal human being?