In Defense of Lawless Order: Mansfield's Paean to Fascism 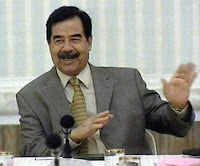 “Law consists of two lines above my signature.” -- Saddam Hussein

"I'm the commander in chief, see, I don't need to explain, I do not need to explain why I say things. That's the interesting part about being president. Maybe somebody needs to explain to me why they say something, but I don't feel like I owe anybody an explanation." -- George W. Bush 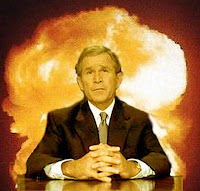 Harvard Professor of Government Harvey C. Mansfield's May 2 Wall Street Journal essay “The Case for the Strong Executive” is a remarkable brief on behalf of unreconstructed fascist rule through an Executive emancipated from the rule of law.

Mansfield, who unblushingly admits that the alternative to the rule of law is "tyranny," insists that the "defects" of our system of liberty under law suggest "the need for one-man rule."

Seriously. He really wrote those words. And he apparently meant them.

He likewise maintains that the rule of law "is inferior to the living intelligence of a wise man on the spot."

This presumably would be true of our incumbent tyrant, an individual who displays no symptoms of either intelligence or wisdom.

To the best of my admittedly limited knowledge, Mansfield -- who is making his bid to become the neo-conservative Giovanni Gentile -- is the first American public intellectual of consequence to offer the unflinching declaration, by way of an op-ed in a prominent mainstream periodical, that the rule of law is disposable – and that the “executive power” supposedly embodied in the president exists apart from the law.

Mansfield refers to the struggle between “the strong executive and its adversary, the rule of law” -- a formulation that cannot co-exist with the constitutional mandate (which is also cited by the professor) that the president “take care that the laws be faithfully executed.” If the executive is an adversary of the law, how can he carry out the function of enforcing it?

Like John C. Yoo and other exponents of unlimited executive power in the Bush Regime, Mansfield believes that the president draws his power not from the Constitution but from “Necessity” -- or, as Machiavelli (whose dubious authority the professor repeatedly invokes) puts it, la necessita che non da tempo (“the necessity that allows no time”).

In times of crisis, therefore, the president, as head of the “energetic” branch of government, can exercise plenary power, at least according to Mansfield's model. In this he would certainly be in agreement with the energetic chief executive who seized extraordinary powers to February 28, 1933 to deal with a crisis precipitated by the burning of Germany's Reichstag Building.

But this comparison is somewhat unfair .... to Hitler and his followers, that is.

The Nazi definition of Fuhrerprinzip posited that the chief executive was the embodiment of the General Will.

This was explained in the Organization Book of the German National Socialist Party:

The Führer-Reich of the [German] people is founded on the recognition that the true will of the people cannot be disclosed through parliamentary votes and plebiscites but that the will of the people in its pure and uncorrupted form can only be expressed through the Führer.... He shapes the collective will of the people within himself and enjoys the political unity and entirety of the people in opposition to individual interests.... [His] power is not limited by checks and controls, by special autonomous bodies or individual rights, but it is free and independent, all-inclusive and unlimited.... He is responsible only to his conscience and the people....

In practice, of course, Hitler and his clique didn't defer to the will of the “people” in any meaningful sense. Be that as it may, Mansfield's version of the “Leader Principle” is actually more radical than the official Nazi version of that doctrine, since he begins with the assumption that the president – by virtue of some divine afflatus, perhaps? -- is endowed with insight superior to that of the common people, and thus has the power, nay, the moral responsibility to defy the public will:

“A strong executive is requisite to oppose majority faction produced by temporary delusions in the people. For the Federalist, a strong executive must exercise his strength especially against the people, not showing them `servile pliancy.... `Responsibility' is not mere responsiveness to the people; it means doing what the people would want done if they were apprised of the circumstances.”

I wouldn't presume to know Mr. Mansfield's unspoken desires and motivations. It is significant, though, that the lines above saw print just a day after the Grand and Glorious Decider, in defiance of public opinion, vetoed a military appropriations measure that oh-so-tentatively prefigured an end to his precious war.

I can't help but suspect that this was – I'll be delicate here – an act of rectal osculation by a servile court academic. It is also a complete inversion of the description offered in the Federalist of the executive's role. 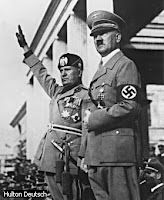 Here are a couple of "energetic executives" who shared Mansfield's hostility to the rule of law and civil liberties.

What the Founders understood, and the Idiot King's war in Iraq demonstrates beyond dispute, is that a lawless executive is the public official most likely to induce and capitalize on “temporary delusions of the people.”

The strength and energy the executive is supposed to exercise consists of holding fast against transient democratic pressures to aggrandize the central government; it is not his role to use whatever powers he can arrogate to himself to overcome public opposition to expensive and freedom-devouring central government undertakings.

As it happens, Mansfield has as little use for individual liberty as he has for the rule of law. This isn't surprising, since these two concepts are intimately intertwined – just as foreign war is joined to executive lawlessness in unholy wedlock.

As Thomas Jefferson might interject at this point, “Well, duh.”

Mansfield, however, disdains the notion that liberties of any sort inhere in the individual, urging instead that we accept a crude utilitarian premise. The needs of the many – as perceived by the lawless executive -- nullify the rights of the few:

“Civil liberties are for majorities as well as minorities, and no one should be considered to have rights against society whose exercise would bring society to ruin. The usual danger in a republic is tyranny of the majority.... But in time of war the greater danger may be to the majority from a minority, and the government will be a greater friend than enemy to liberty. Vigilant citizens must be able to adjust their view of the source of danger, and change front if necessary. `Civil liberties' belong to all, not only to the less powerful or less esteemed, and the true balance of liberty and security cannot be taken as given without regard to the threat.”

It's important to recognize – as Mansfield certainly must – that the present argument over “the true balance of liberty and security” does not involve only “civil liberties,” but also the most basic individual rights and immunities long recognized in our Anglo-Saxon culture. We've long since ceased to argue over how to fine-tune the constitutional assignment of powers, or even over whether the Constitution should be followed at all.

At this point, freedom-focused people are trying to restore the Magna Carta by undoing the Bush Regime's repeal of the Writ of habeas corpus.

Regarding that fundamental, definitional due process guarantee – the literal foundation of our system of liberty under law -- official position of the Bush Regime today is exactly the same as that of Hitler's regime when it suspended habeas corpus on February 28, 1933: Any individual, citizen or non-citizen, can be deprived of the law's protection at the whim of the Executive, and imprisoned indefinitely without legal recourse.

Totalitarianism could be described as the creation of order without law through a regime claiming limitless power (“power without limit, resting directly on force, restrained by no laws, absolutely unrestricted by rules,” as Lenin put it).

Professor Mansfield's protracted exercise in undergraduate-level sophistry is intended as a defense of the Bush Regime's version of this lawless order. What better evidence can we find to support the once-controversial proposition that “Harvard Hates America”?

Please be sure to stop by The Right Source.

The professor is watching too much 24.

Looks like one got through from one of the "Doobie" brothers.

Just a reminder, Will.

I believe there are many Dr. Jekylls out there. They can only remain incognito, so to speak, for so long before Mr. Hyde reveals himself, in this case as in most, through writings. There's probably a lot more Dr. Jekylls, particularly in academia and increasingly in government, than we realize.

See, the thing is, those ragamuffin "free love" hippy students on a campus in a former era inevitably become, in a later era, the Hitlers and Stalins in pressed leisure suits now ensconced in the faculty department or in a government advisory position.

Mansfield scares me because he bluntly, and without shame, puts a face to what the servile media will not admit; that we have fascism in America, and like Upton Sinclair's statement so long ago, its wrapped in a flag and carrying a cross.

That there are so few voices within the dominant media establishment speaking against this mindset, shows that it is subordinate or working in league with these very fascist organs. I suspect they're only kowtowing so as to secure their place in the "new order" as official mouthpieces for propaganda. Which begs the question.... So what would be different?