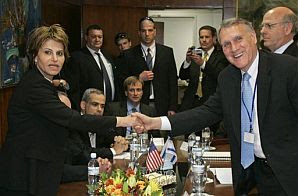 I do solemnly swear that I will support and defend the Constitution of the United States against all enemies, foreign and domestic; that I will bear true faith and allegiance to the same; that I take this obligation freely, without any mental reservation or purpose of evasion, and that I will well and faithfully discharge the duties of the office on which I am about to enter. So help me God.” (Emphasis added.)

Oath of office for US Congressmen and Senators

Over the weekend, a small delegation of American legislators was shuttled by military plane to Israel to take part in meetings of “a joint Senate-Knesset committee headed by Senator John M. Kyl, who is close to President George W. Bush and Vice President Dick Cheney." In addition to Senator Kyl, the group included Representatives Jane Harman (D-California), Gabrielle Giffords (D-Arizona), and Steve Pearce (R-Arizona).

Yuval Steinitz, the Likud Party parliamentarian who hosted the American delegation, defined the purpose of the two-day visit in startlingly brazen terms: “We think that it is important that the members of the delegation feel the connection and understand Israel better. They are mostly non-Jewish and we want them to feel some obligation to the country.” (Emphasis added.)

The oath that these elected representatives took, invoking the holiest of Names, precludes them from feeling an “obligation” of any sort to any country other than our own – however laudable, or however infamous, that foreign nation may be.

I hope he's seeking forgiveness for perjuring himself in God's name: Kyl at the Western Wall

Steiniz boasts that the joint committee “has had major achievements and we hope that this visit will lead to additional feats.” The specific “feat” he has in mind is war with Iran, which was to be the focus of briefings the US legislators would receive from the head of the Mossad, Meir Dagan.

In fact, there's reason to believe that this committee – a constitutionally impermissible and morally reprehensible blending of our legislative branch with that of a foreign state – was created for the express purpose of agitating for a war with Iran. It was created in 2003, and since then has left an almost imperceptible paper trail.

One of the few references to the Committee's work that Google was able to scrape up was a Christian Science Monitor account of testimony delivered before the Committee in September 2003 by State Department official Paula DeSutter, who insisted that a nuclear-armed Iran “cannot be allowed to happen.”

The Committee has been stealthily efficient: “In the past, the joint Knesset-Senate Committee helped make hundreds of millions of dollars available for Israel's missile defense shield, Arrow, which is produced in cooperation [with] Boeing in the US. In addition, according to Steinitz, the committee has in the past prevented arms sales to Arab states that would have threatened Israel's unique edge in the region; it also initiated the Iran sanctions law, which makes it illegal for governments to provide arms or aid Iran's nuclear program....”

So the Committee's work has (arguably) been beneficial to Israel, profitable for Boeing, a minor inconvenience to Arab states (who, alas, have the money and means to get arms elsewhere), and an insult to foreign governments that must find it peculiar to be told they have to obey restrictions imposed on them by a law that began as the bastard offspring of an illegitimate bi-national committee.

The question is: What benefit, if any, has this arrangement provided for the people who sent those legislators to Washington, the ones whose taxes have purchased Israel's missile shield, and whose children would likely die in the wars that are being propagated in the Middle East?

That's a question that should be posed – bluntly, forcefully, and often – to Kyl and his companions when they return from their junket.

The Bush Regime has claimed the power to take our country to war with Iran without legislative action of any kind. The Democratic congressional leadership is doing nothing about this, except to trip over its own feet and stumble over its collective tongue in its eagerness to condemn Tehran as a world-historic menace. 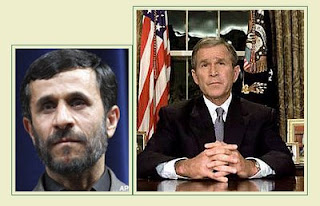 Iran's demented executive figurehead, and his American equivalent: Am I the only one who detects a certain ... resemblance?

It says a great deal about our predicament that now, after the public mood has turned decisively against the war in Iraq, and with little public support for expanding the war to include Iran, congressional leaders and presidential aspirants from both branches of the Establishment Party have turned to Israel for support.

This week's visit by Kyl and Company comes just a few weeks after this year's “Edmond Benjamin de Rothschild Herzliya Conference on `The Balance of Israel’s National Strength (hosen) and Security,'” which is billed as a summit of “the most influential Israeli and international leaders.” This year's edition included presentations from presidential aspirants Mitt Romney, John Edwards, and Newt Gingrich, all of whom focused on the “existential” threat posed by Iran.

Ironically, the most sensible thing said to the conference was said via satellite by the execrable Alan Dershowitz, to whose tongue and pen truth and wisdom had previously been total strangers.

Alas, to get to Dershowitz's kernel of wisdom we had to pick through the predictable pile of, well, Dershowitz.

Acting as spokesman for the League of the Perpetually Aggrieved, the Dersh played the victim card, insinuating that General Wesley Clark (a Democratic presidential hopeful) was dealing in anti-Semitic stereotypes by hinting “at Jewish involvement in U.S. foreign policy by saying `New York `money people are pushing the U.S. into war with Iran.'”

First of all, given that General Clark is Jewish, the anti-Semite label rubs right off. Secondly, given that there are millions of Jews who are loyal Americans, it's unavoidable that there will be “Jewish involvement” in American foreign policy. What is at issue is Israeli involvement in U.S. Foreign policy – and in light of what we've seen about the blatant co-mingling of legislative power between Washington and Tel Aviv, that case is utterly airtight.

(While we're on the subject of foreign influence on U.S. Foreign policy, somebody should corner General Clark and ask him about the role played by the Saudis in promoting NATO's 1999 terror-bombing of Serbia on behalf of the so-called Kosovo Liberation Army.)

In defiance of all expectations, Dershowitz somehow came to a sensible conclusion:

“Israel must be prepared to lose American support in the coming years both diplomatically and economically....My message to Israel is ‘be strong’ and be prepared to go it alone.”

Antiwar.com has linked to my most recent piece for The American Conservative, "Terrorists Chip In," which describes the dangers of the new RFID-"enhanced" passports.

Mark Dankof of the Republic Broadcasting Network informs me that Monday morning's interview will be posted to RBN's website as soon as their archives are up and running again. He was a gracious and very interesting host, and I really appreciated the opportunity to be on his fine program.

Last of all, and apropos of nothing, if you have about eight minutes to kill witnessing the casual virtuosity of a living master of his craft, please check this out. It's worth waiting to the end of the clip to hear his rendition of a Marty Robbins tune -- even if classic country ain't your bag.

Be sure to visit The Right Source for news, commentary, Kevin Shannon's daily radio program, and other valuable information.

I just wanted to bring to your attention the fact that at the bottom of your article for the American Conservative, it lists the website for The Right Source as (http://www.therightsourceonline.com) rather than as (http://www.rightsourceonline.com). I do not have the print version of the magazine handy but I assume the same mistake is there as well.

Keep up the good work!

Here in S. Az - home turf of both Kyl and Giffords - the local network news only mentioned that they'd gone to Iraq.

Well, what else is new!?

How often do they spend tax dollars to shuttle themselves about the globe all the while nailing our coffins?

Anyone? Anyone? Bueller?... Ferris Bueller?

These elitists continuously wrap themselves in the flag... now which one that is I'll leave up to you. It simply boggles the mind.

And as far as the Iranian "president" goes. He can bluster and make as many "crazy" statements as he wants but ultimately he doesn't hold the reins of power. Neither has he marched armies into neighboring or non-neighboring nations on the other side of the globe.

On the other hand our resident chief-executive-psycho has blown hundreds of billions and countless thousands of lives all the while using newspeak to proclaim it "freedom".

Yes, yes, I'm sure the ghosts of those shuttled into the netherworld have been freed from any further worldly concerns. For that they must surely thank us.

I imagine that the politicos are going to start pandering to the religious right that we have to support and protect Israel from the alleged Iranian threat on the basis that to be an ally of the current political Israel is to be equated with doing God's will.

Personally, I'm not convinced that the Biblical concept of israel has much to do with the current political nation called Israel. I'm hoping that I'm not the only one who feels this way.

The oath that these elected representatives took, invoking the holiest of Names, precludes them from feeling an “obligation” of any sort to any country other than our own – however laudable, or however infamous, that foreign nation may be.

I like how Former Secretary of Agriculture Ezra Taft Benson put it:

"There is one and only one legitimate goal of United Stats foreign policy. It is a narrow goal, a nationalistic goal: the preservation of our national independence. Nothing in the Constitution grants that the president shall have the privilege of offering himself as a world leader. He is our executive; he is on our payroll; he is supposed to put our best interests in front of those of other nations. Nothing in the Constitution nor in logic grants to the president of the United States or Congress the power to influence the political life of other countries, to ‘uplift’ their cultures, to bolster their economies, to feed their people, or even defend them against their enemies."

Kirk, I guess you could label me a so-called "religious right" nutjob and the politicos haven't pandered to me at all. The country is becoming ever more greedy, depraved, dumbed down, ignorant, drugged up, and dependency-minded regardless of what some clueless charismatic preacher happens to be yammering on about in the limelight of radio and TV exposure. None of that means jack in my book.

Again, this brings up the same conundrum in my mind that also plagues the so-called "WAR on Drugs." In this particular case, that would be that unless we halt ALL foreign aid to every nation, we cannot just stop assisting Israel. That would mean Egypt, the so-called "Palestinians," et al. Is that going to happen? Sigh, probably not.

On "today's" Israel. I can't grok why some folk think that the current day Israel is somehow a deception, a mirage, a con, or a fraud of some sort.

Ancient Israel wasn't a mere concept as far as I can tell (at least since the time of David, circa 950BC) from reading the Bible. It was a real political entity like ancient Babylonia, Assyria, or Persia, but was divided initially into twelve Hebrew tribes. All of the Hebraic kingdoms were united as the Kingdom of Israel under David.

So if many folk believe the Israel of today is a haphazard fraud or construction of some sort, why do today's Israeli citizens read, speak, write Hebrew, a formerly ancient and dead language? It was an essentially dead language for almost two millennia, since the AD 70 destruction of the Temple and diaspora, yet miraculously resurrected with the re-establishment of Israel in 1948.