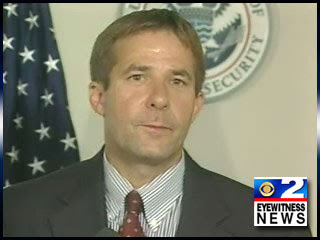 Doug Melvin: Sexual deviant, former Homeland Security commissar -- or do I repeat myself?

For those frequently sentenced to commercial air travel, few things are less welcome than the following thought:

The taxpayer-fed Transportation Security Administration (TSA) at the airport security checkpoint could be a petty thief or a sexual deviant. And the odds are pretty good that the typical batch of TSA chair-moisteners includes at least one or the other. This makes things quite uncomfortable as TSA screeners paw through one's luggage or conduct invasive personal security inspections.

About a year ago, a TSA airport screener in Ketchum, Idaho was arrested for kidnapping a young boy. Although identified as Robert Joe Harrison Jr., the screener was found to possess at least five separate identities. He was eventually acquitted of kidnapping, but found guilty of child enticement. 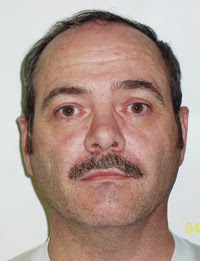 
After Mr. Harrison (as we'll refer to him for the sake of convenience) was arrested, his federal supervisor in Boise made the familiar and expected noises of outraged moral resolution.

“TSA is a large organization with a large workforce, [and] unfortunately we have an individual who does things that are truly inappropriate, things that are intolerable for TSA,” stated Doug Melvin, Federal Security Director for Idaho. Melvin insisted that the TSA had a “zero tolerance” policy for behavior of this type. He didn't explain how a suspected pederast with five aliases and sets of personal ID could pass a federal background check.

Less than a year after Harrison's arrest, Mr. Melvin has been forced to resign as a result of his own public sexual misconduct. 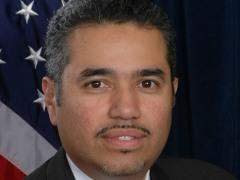 This last bit of behavior resembles the conduct of Frank Figueroa, Melvin's former comrade in the Homeland Security Department. Figueroa, a former high-ranking official in the DHS's Immigrations and Customs Enforcement (ICE) division, was head of “Operation Predator,” a nation-wide crackdown on child sex offenders. Thus there was some kind of bizarre symmetry at work when Figueroa was arrested by Tampa police in late 2005 after he exposed and, ah, manipulated himself in the presence of a 16-year-old girl.

As I've said before: Once is an anomaly, twice a coincidence, but three or more instances constitute a pattern. 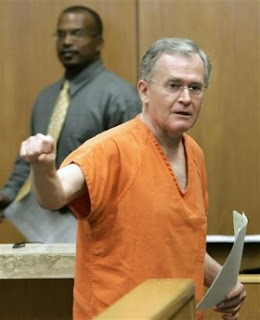 To the cases of Harrison, Melvin, and Figueroa we can add that of J. Brian Doyle, the former fourth-ranking official in DHS's propaganda directorate, who was arrested for conducting sexually explicit cyber-conversations with what he thought was a cancer-stricken 14-year-old girl. And we shouldn't forget the case of Michael Burks, the Homeland Security official snared in NBC Dateline's “To Catch a Predator” sting roughly a year ago.

The problem, of course, is not that there's a small number of perverts scattered through the DHS's personnel pool like a handful of raisins in several gallons of rice pudding. The deeper cause for concern is the culture of impunity that characterizes that elephantine bureaucracy – a sense that those who work therein are made of holier, more refined stuff than the hoi polloi.

One perfectly suitable example of this attitude can be found in the fact that the highest commendation for ethics that TSA can bestow is the “John W. Magaw Values Award.”

“Who was John W. Magaw,” you ask, your brows embracing in puzzled non-recognition?

Magaw was the first director of the TSA, appointed to that gig in late 2001 after a less-than-laudable stint as director of the Bureau of Alcohol, Tobacco and Firearms (ATF). The fact that TSA named an award after a living, recently retired head of the agency is a nauseating bit of Soviet-esque sycophancy. More troubling in this specific case is Magaw's own behavior, which apparently typifies the “values” the TSA is supposed to embrace.

Magaw was head of the Secret Service's presidential detail in 1993 when Bill Clinton appointed him to head the scandal-plagued ATF following the Waco massacre. For six years, until his lateral move to the Federal Emergency Management Agency (FEMA) in 1999, Magaw did his best to delay, divert, distract, misdirect, and otherwise obstruct efforts to expose the ATF's misbehavior in the events leading up to the atrocities at Waco and Ruby Ridge.

Magaw also successfully dissipated public and congressional outrage over the 1995 revelations of the ATF's annual “Good Old Boys Roundup,” an event that “included racist signs and slogans and skits that included simulated sex acts and torture between white and black-faced participants,” as one account summarizes. Although sponsored by the ATF, this event – sort of an annual dress rehearsal for Abu Ghraib – reportedly included participants from the FBI, Drug Enforcement Administration, the Secret Service, US Marshals Service, and other federal agencies. Apart from one congressional hearing in July 1995, nothing of any consequence was done about the “Roundup” events.

During a 1995 Senate hearing into the slaughter at Ruby Ridge, Magaw adamantly defended the ATF informant who – according to a 1993 court verdict in Idaho – had entrapped Randy Weaver as part of a scheme to blackmail him into becoming a federal informant. Magaw insisted, once again despite vedicts to the contrary -- that the behavior of ATF officials in the Weaver case “was lawful and proper in every respect."

Asked by Senator Arlen Specter (R-Pennsylvania) why he persisted in ignoring the jury's findings to the contrary, Magaw invoked the principle of statist solidarity: "Do you believe Randy Weaver--or do you believe the federal agents who have sworn to tell the truth and are carrying out a career in this government?"

Therein lies the true perversity at the heart of the regime Magaw served so dutifully: The conceit that those in the State's employ are innately superior to, and deserve dominion over, the “mundanes” who are not agents of the Leviathan. As one of Magaw's Soviet soul-mates put it, “To us, everything is permitted....”

This would apparently include public acts of sexual degeneracy and predation by agents of the Homeland Security apparatus, as long as those committing them aren't caught. Doug “Flash” Melvin and his erstwhile TSA comrades insist, his sudden resignation from the agency for “personal” reasons has nothing to do with his sexual exhibitionism.

(If you're interested in the previous three installments in the "Perverts With Power" series, look here, here, and here.)

A quick note: Tomorrow I will be on "Iron Sharpens Iron" with Chris Arnzen on New York City's WNYG.

And be sure to visit The Right Source for freedom-centered news and commentary.

I AM a Transportation Security Officer (TSO).
YOU are being trained to be randomly and irrationally stopped and searched, and to tolerate it. You are also being checked, if you are found with large amounts of cash, you WILL be investigated. You are being randomly checked for "drug paraphenalia", you WILL be arrested. Your belongings are being checked for anything odd, beware.
WE are being trained to "screen" large numbers of people, rapidly, on their way into the CAMPS. We like to call it "emergency response capabilities".
You should have joined the Militia when you had a chance.

http://www.rwva.org/ would be a good place to start if you haven't "joined a militia", not a militia, just a bunch of men and women learning and teaching what it means to embrace and be competent at the "riflemans quarter mile" Have fun and be safe. Good folks, very diverse and some of the more enlightened people I have met.

That does not excuse that behavior . Doug melvin is a con artist and he has embezzled millions. The worst part is he lives in Boise and has taken a lot of investors for large amounts of monies. Stay clear charges soon to follow