The Enemy At Their Backs 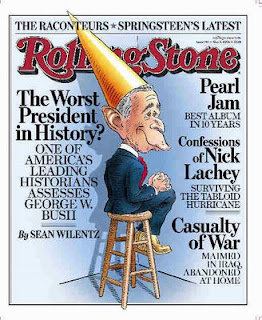 The fundamental perversity of the Bush Regime's escalation in Iraq isn't found in the fact that the “surge” reinforces a failed policy. It is that the US troops being sent by Bush into Iraq are confronting a Sunni insurgency that is being materially aided by the same administration. This is perversity compounded with betrayal, and compounded once again with murderous mendacity as the Bush Regime seeks to blame Shi'ite Iran for Iraq's Sunni insurgency as a way of propagating a wider war in the region.

“The administration is trying to make a case that Iran is more dangerous and more provocative than the Sunni insurgents to American interests in Iraq, when – if you look at the actual casualty numbers – the punishment inflicted on America by the Sunnis is greater by an order of magnitude.... This is all part of the campaign of provocative steps to increase the pressure on Iran. The idea is that at some point the Iranians will respond and the Administration will have an open door to strike at them.”

That “open door” would most likely be exploited sometime in the coming month, reports former CIA officer Philip Giraldi in the current issue of The American Conservative:

“A Kuwaiti newspaper, relying on confidential sources in the Emirate's government, predicts that the attack will take place before the first week of April, when Tony Blair steps down as British prime minister, under the assumption that he will provide political cover as well as material support in the form of minesweepers. As Kuwait's government, host to the sprawling US base Camp Doha and a prime target for Iranian retaliation, has been in the loop for planning vis-a-vis Iran, the suggested date has a high level of credibility.”

The trigger for war, Giraldi continues, might be pulled as a result of “a Gulf of Tonkin type incident in which Iran fires on or otherwise interferes with a US warship. As two carrier groups [led by the USS John Stennis and the USS Dwight D. Eisenhower] will basically fill the shallow and narrow waters of the Persian Gulf, the potential for an incident is obviously very high.”

Hersh reports that “a special planning group has been established in the offices of the Joint Chiefs of Staff, charged with creating a contingency bombing plan for Iran that can be implemented, upon orders from the president, within twenty-four hours.”

Those operational plans obviously assume that Imperator Bush can and will commit our nation to a full-fledged shooting war with Iran without congressional action of any kind, much less the formal declaration of war that is a non-negotiable constitutional requirement.

At present, the Democrat-controlled Senate is too busy dithering and equivocating about the non-declaration of war against Iraq it issued in late 2002 to forestall the Regime's transparent efforts to expand the war to include Iran.

Most of the Democratic leadership appears to be amenable to an attack on Iran: As Giraldi writes: “Those who hope that Democrats will stop the rush to war need only note the repeated excoriation of Iran by party leaders like Hillary Clinton, Nancy Pelosi, Steny Hoyer, and Charles Schumer. Howard Dean has declared that the US attack on Iraq was directed against the `wrong enemy' while Iran is the `right enemy.'”

Meanwhile, those elements of the Right that aren't full-fledged members of the Bushcult are, for the most part, ignoring the Regime's drive for war with Iran. In some cases – as with the guys leading this outfit, an organization of wonderful people whose agenda, alas, is set by someone whose trumpet is so uncertain it's most likely a Flugelhorn – even some paleo-conservatives offer equivocal support for the prospective war (or even nuclear annihilation of Iran's entire population – scroll down here for a detailed discussion of this point).

At present, the only impediments to a full-scale war are, first, the relative moderation and discipline of the regime in Tehran (contemplate, for a second, what this says about the irrationality of our rulers in Washington), and whatever countervailing influence within the Pentagon is being exercised by a group of command-level officers who have reportedly threatened to resign if the Bush Regime attacks Iran.

“There are four or five generals and admirals we know of who would resign if Bush ordered an attack on Iran,” reported a British Intelligence source to the London Times. “There is simply no stomach for it in the Pentagon, and a lot of people question whether such an attack would be effective or even possible.”

“The threat of a wave of resignations coincided with a warning by Vice-President Dick Cheney that all options, including military action, remained on the table,” noted the Times.

Whether or not the Regime gets its war with Iran, its ongoing war in Iraq and covert actions throughout the region have materially aided both the radical Shi'ites aligned with Tehran – who are running the government in Baghdad – and the radical Sunnis who are aligned with al-Qaeda.

Hersh's current analysis in The New Yorker points out that the Bush administration, the Saudis, and the Israelis have all thrown money and material support to elements of the Muslim Brotherhood, the Egyptian-born Sunni terrorist network, created in 1928, that is the ancestor of every Muslim terrorist group of any consequence. This includes the diffuse and over-rated (but undeniably murderous) fraternity called al-Qaeda.

This campaign is being carried out, according to Hersh, by the same cast of malefactors that brought us the Iran-Contra scandal in the mid-1980s – which provided military and intelligence aid to Tehran in its war with Iraq.

The Brotherhood is seen by the Washington-Riyahd-Tel Aviv axis as a surrogate in the unfolding regional war between the Sunnis and Shi'ites. The interest of Saudi Arabia's Sunnis is obvious. Hezbollah leader Sheikh Hassan Nasrallah, whom Hersh interviewed in Beirut, accuses Washington and Tel Aviv of instigating “fitna” -- an Arabic word referring to “insurrection and fragmentation within Islam.”

Nasrallah believes that the objective is to create a “new Middle East” in which “Israel will be the most important and the strongest state in the region,” surrounded by a relatively docile collection of small sectarian mini-states.

Yes, Nasrallah is a terrorist leader aligned with Iran. But his projections line up nicely with the strategy devised by the architects of the current Iraq war: Take down Iraq, Iran, and Syria, “democratize” Egypt and Saudi Arabia, and plant a permanent US military presence in the region.

It's not clear how long the Bush Regime has been running a covert war against Iran, and collaborating with the Muslim Brotherhood and other radical Sunni groups in the region. What is clear is that every US soldier who is killed or maimed by Sunni insurgents in Iraq is as much a victim of the enemy at his back in Washington – the real enemy – as he is of the insurgents who surround him.

Be sure to check The Right Source for news, commentary, talk radio, and (coming soon) information & action suggestions from a freedom-centered perspective.
at 10:26 AM

"which provided military and intelligence aid to Tehran in its war with Iraq....."

Lest we forget. The U.S. provided the same for Saddam. Its bitterly ironic that he was hanged for an event that predated the Kurd gas attacks because if he'd ever been brought to trial for that even greater atrocity they'd have inevitably pointed to US involvement... i.e. where the chemicals came from.

A lot of skeletons would have danced out of the closet and the mafiosi running our "government" could never have allowed that to occur.

can you say "operation northwoods?" naw. i cannot. maybe they'll call this one "operation Thermopylae" cuz the "gates of hell" will be opened when, not the "royal we", but the head shed attacks iran. this is insane. i sincerely pray that the Lord will not allow this to happen...but that's just my flesh-man speaking. oh well, God is still in control.

All of these wars and rumours of wars just to realign the region into the forthcoming Middle East Union, one of ten planned regional superstates to complete the New World Order? It is indeed a frightful development of biblical proportions.