I'm From The Government, So I Get To Kill You 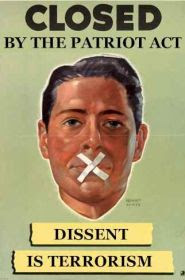 Right Now, justice is being perverted in a court of law...

Right Now, the truth is being obscured...

Right Now, a mad man is wandering the streets of the town you live in...

Right Now, our government is doing things we think only other countries do....

Right Now, a thuggish policeman in a country like China or Cuba is grinding a hapless victim's face in the dirt and then dragging another off to jail. En route to the detention center, the victim starts to pray, asking God to help him and to forgive his captor. This gesture is greeted with a contemptuous belch and a sneering question: “Who's this God you're praying to? Let's see your God get you out of jail.”

"Once you're behind bars," the uniformed thug taunts, his features twisted into a sadistic smirk, "you'll be beaten and most likely raped."

It's not difficult to imagine something of this sort happening in some wretched Communist of Muslim country. Most Americans couldn't imagine this happening in the United States. This could be considered a failure of imagination, except for one thing: What I describe above actually happened in 1997. The assailant was a police officer in Prince George's County, Maryland, an Army veteran named Keith Washington (and a graduate of the Army's Command and General Staff College).

In the decade since that incident – which I'll describe in more detail anon – Officer Washington compiled a lengthy list of complaints for his behavior both on- and off-duty, distinguishing himself even among members of a law enforcement agency notorious for its lawlessness and corruption. On the strength of that job record, as well as fraternity ties to the County Executive, Washington was appointed Deputy Homeland Security Chief for Prince George's County.

That was the rank Washington held when he was involved in a January 24 dispute with furniture delivery men over a scratched headboard. That dispute ended with Washington drawing a gun and shooting the delivery men. The department, in keeping with the Homeland Security ethos, initially charged the men Washington had shot with assault, but withdrew the charges in the interest of public relations shortly before one of the officer's victims died. Washington remains on administrative leave, rather than behind bars, which is where he would be if he weren't employed by the Regime.

The Face of the Enemy: From all appearances a decent and respectable man, Keith Washington embodies the arrogant corruption of the emerging American Reich.

In the weeks leading up to that fatal shooting, Washington had been involved in several arguments with officers of his Homeowners Association, assaulting at least two of them.

None of these developments should be a surprise to those involved in a 1997 traffic accident involving Washington and an attorney named Paul Essex.

In court testimony recounted by the Washington Post, Essex recalled the post-accident confrontation with Washington.

“You caused this accident!” snarled the officer.

“That's a decision for the court to to make,” Essex reasonably replied.

“Out here, I am the court,” declared Washington.

When Essex disagreed, Washington placed him under arrest.

“He grabbed my arm and ... jacked my arm up and pulled me back over to the driver's side front fender,” Essex recalled.

A mechanic named David Paul Maslousky, who was a passenger in Essex's car, was thrown to the ground and arrested for “hindering” Washington in the performance of his duties, a charge that was later dropped.

During the drive to the police station, amid a constant stream of threats and invective from Washington, Maslousky began to pray. It was at that point that the officer slipped into the persona of a Soviet commissar, mocking the man's religious convictions and promising that “Bubba” would soon “have his way with you.”

Maslousky later took Washington to court, winning a $210,000 damage award that was eventually overturned on appeal. The officer's defense strategy was to defend arrogance, pomposity, and aggressive hostility to the civilian public as indispensable traits for a successful law enforcement officer.

“No one has a right to a polite and cordial police officer,” insisted County Attorney Andrew Murray, who represented Washington. Of the behavior on display when he was needlessly provoking Essex and grinding Maslousky into the dirt, Murray insisted: “[T]hese are characteristics that he employs ... so that he can make order out of chaos – these are characteristics that enable him to survive his day-to-day contact with citizens so he can go home and see his family.” (Emphasis added.)

Note this well: Washington's defense assumes that the citizenry is a threat to be subdued, and civilian life a form of chaos to which he must bring order. This is what they're teaching at the US Army's Command and General Staff College, and most likely in police academies across the nation.

Washington's ascent to prominence in Prince George's County is hardly surprising to those who have chronicled the bloody, corrupt exploits of its police department.

In 2001, to cite one example, Howard University student Prince Jones was killed in an execution-style police shooting, his body riddled with four bullets. The police described the incident as a “surveillance operation gone bad,” insisting that Prince – a clean-cut, well-respected man with plans to marry and enlist in the Navy – was mistaken for a dreadlocked drug dealer nearly a foot shorter and substantially heavier.

This incident was regrettably representative of law enforcement in Prince George's county, which “could boast a healthy cross-section of shootings, maimings, and thrashings that would easily make the Blue Beatdowns Hall of Fame,” lamented The Washington Monthly.

Last September, the County was hit with a verdict awarding $6.4 million in damages to Keith Longtin, whose wife Donna was kidnapped, raped, and murdered in 1999. The police took Longtin into custody and subjected him to a 38-hour “coercive interrogation”; he was allowed roughly one hour of sleep and infrequent bathroom breaks as officers worked shifts in the hope of extorting a confession. Eventually the detectives reported that the husband had confessed; he insisted that this was a lie. On the strength of that supposed confession Longtin was held in jail for 8 months – roughly seven months after DNA evidence extracted from his murdered wife's remains exonerated him.

During the 1990s, writes the indispensable James Bovard, the Prince George's County police department “killed and maimed more people than the Unabomber and the Aryan Nation combined. They have a worse human rights record than the Federal Bureau of Investigation [which was involved in the Ruby Ridge and Waco massacres]. If they were a foreign-based entity classified as terrorists (such as Hamas), and you contributed to their cause, you would face up to 10 years in jail for supporting terrorism. Instead, they are supported with your tax dollars. They are the 1400 members of the Prince George's County police department.”

“Among the shootings the police department ruled as justified: `An unarmed construction worker was shot in the back after he was detained in a fast-food restaurant. An unarmed suspect died in a fusillade of 66 bullets as he tried to flee in a car from police. A homeless man was shot when police mistook his portable radio for a gun. And an unarmed man was killed after he pulled off the road to relieve himself.'”

In Maryland, as elsewhere, police officers enjoy immunity from questioning for 10 days following the use of deadly force; this interval can be, and often is, exploited by corrupt police to collude in creating a cover story.

Prince George's County abuts the Imperial Capital, and at the beginning of the decade the odor of corruption became so pervasive that the Justice Department put the police under FBI scrutiny. The elevation of Officer Washington – whose reputation was hardly a secret -- to second in command of the County's Homeland Security office apparently raised no eyebrows in Washington. He's most likely just the sort of hero the Feds had in mind when they created the Heimatsiecherheitsdienst.

Make sure to visit The Right Source to listen to Kevin Shannon's Right Source radio program -- available via streaming or on-line archives.
at 2:12 PM

This Washingon is one scary fellow. He murdered someone, to this should there be no statute of limitations.
Keep the pressure to this matter. I websearched, this man is running for city council of Prince George's. See his Website. Just search for Prince George's and Keith Washington. It is the same man. Such irony: He speaks of accountability. Yes, I really believe that, don't you? A picture of his family as well, what a lovable guy must he be. I wonder, does he want to assault his constituents, that voted for him?
Another note, does it bother you to see Google Analytiks showing up every time you make a blog-post? Intrusive, no?

The man, Washington, is clearly a nut! Give him a badge and a gun and before you know it this cowboy sees everyone else as indians "needn' a good killn'"

Looks like Professional Manian Keith Washington is up to his old shenanigans, this time "Washington, the county’s deputy homeland security director, was arrested and charged with first-degree assault Friday, after he allegedly pulled a gun on a real estate appraiser who mistakenly came to his home Thursday morning. Washington posted bail after spending the afternoon in an Upper Marlboro jail."

I would like to say that I've lived in a number of places, and the extent that those animals will go to to secure a drug handout or bribe. I walked away from Prince Georges County with nothing, because they decided in the P.G County Police department that it was their right, and responsibility to relieve me of my belongings and cash my paychecks you see because I wouldn't turn tricks for drugs, they got a lot of nasty animals with drug habits, criminal backgrounds and psych records wandering around with guns killing innocent civilians, and they fix it by lying, and ruining a persons life.

I've decided to take matters into my own hands, always always be careful who you play with you scourges.....You see I happened to be an SEC investigator investigating the loss of 100's of millions of dollars, some of my friends in TimeWarner decided to mole a bunch of checks in my names while they were running from the lawsuits of Investigators....I've decided to point the finger at these animals in LAW ENFORCEMENT IN PRINCE George you bully animals love stealing from the Poor don't you.

YOU'RE A BUNCH OF STINKING DEAD GARBAGE IS WHAT YOU ARE, YOU'LL KEEP DYING, THEY'LL BE BEATING YOUR BRAINS OUT IN THE P.G P.D FOR YEARS TO COME.

I'll teach you all a lesson in bullying you will NEVER FORGET FAGGOTS.