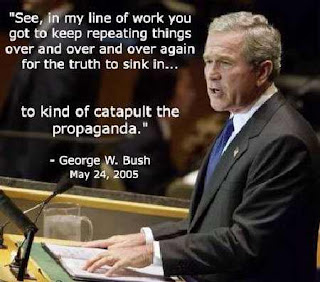 I desperately want to support HJ Res. 14, a bill sponsored by Representative Walter Jones (R-North Carolina) that is intended to pre-empt the Bush regime's plans for war with Iran.

“No provision of law enacted before the date of the enactment of this joint resolution shall be construed to authorize the use of military force by the United States against Iran.”

This statement is obviously true, and should thus be unnecessary. However, various representatives of the Regime – including but not limited to Commissarina for External Affairs Condoleeza Rice – have brazenly and repeatedly claimed that Bush has the innate authority to order a military attack on Iran, or any other nation, at his discretion.

In fact, as Republican Senator Charles Hagel pointed out in a recent interview with GQ magazine, in late 2002, when the Bush Regime was maneuvering the nation into war with Iraq, it submitted a draft resolution to Congress that would have authorized a war against the entire Middle East.

The White House's proposed resolution, Hagel recalled, would have permitted them to “go anywhere in the region.... They could go into Greece or anywhere. Is central Asia in the region? I suppose! Sure as hell it was clear they meant the whole Middle East. It was anything. It was literally anything. No Boundaries. No restrictions.”

The Regime has never permitted something as trivial as the Constitution or the law to impede its objectives, and it has proceeded -- in its demented, power-enraptured, reality-aversive way – as if its original resolution had been passed.

How do we know this?

The Regime has said as much in congressional testimony.

In an appearance before the Senate Foreign Relations Committee in October 2005, Ms. Rice was asked whether the Bushling would circumvent congress in ordering a military strike against Iran or Syria.

“I will not say anything that constrains his authority as commander-in-chief,” replied Rice, a non-responsive answer that assumes the president has the authority to launch a war against either country without a congressional declaration. When pressed by Senator Paul Sarbanes (D-Md.) as to whether congressional authorization would be sought before military action was ordered, Rice continued in the same vein: “The president never takes any option off the table, and he shouldn’t.”

In a tidy phrase, the Busheviks assume that all power resides in the executive, including the unilateral power to expand the war into Iran.

(For a stunning illustration of how widespread this doctrine is in the totalitarian death cult that was once the Republican Party, watch this clip of Virginia Representative Eric Cantor insisting – with a dutiful subservience one usually sees in Pyongyang – that the president didn't need congressional authorization to attack Iraq, and needs none to expand the war to Iran. It's understandable if you entertain the fleeting thought that Cantor is another of Stephen Colbert's satirical creations.)

Rep. Jones' amendment restates the obvious: Bush has never been authorized to prosecute a war against Iran. We have reached the stage in our nation's descent into full-orbed despotism that stating the obvious about such matters is not only necessary, but courageous.

It is in its second clause that Rep. Jones' resolution breaks down:

“Absent a national emergency created by an attack by Iran, or a demonstrably imminent attack by Iran, upon the United States, its territories or possessions or its armed forces, the President shall consult with Congress.” 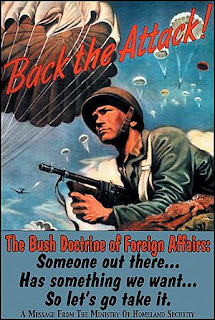 Trying to arrest the Regime's drive to war with Iran with this language is a bit like trying to lasso a locomotive with linguini. This formulation leaves the initiative with The Great And Glorious Decider and his handlers. It is that pack of felons who would determine whether Iran poses the threat of a “demonstrably imminent attack.” And as presently written (read it carefully), this provision would permit Bush and his handlers to start a war without so much as consulting with Congress if they can contrive a suitable rationale.

Only Congress can declare war. It's not a matter of the president “consulting” with Congress, or Congress issuing some anodyne resolution allowing the president to make the call. That power is vested in Congress by the Constitution, and anything other than a formal, explicit declaration of war by that body is inadequate and improper.

This is certainly not to say that all wars declared by Congress are morally defensible, since most of the declared wars in our nation's history were not. It is to say that an undeclared war is facially unconstitutional, illegal, and morally impermissible.

The fatal problem with Rep. Jones' resolution is this: As things stand right now, the Busheviks are already claiming that Iran has attacked our occupation forces in Iraq. 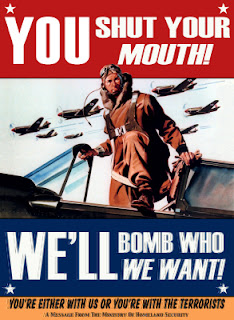 That was the point of last weekend's highly classified, double-secret-probation, one step removed from the Cone of Silence briefing by anonymous officials who offered an “assessment” that Iran has been smuggling “explosively formed penetrators” to Iraqi insurgents for use against U.S. Personnel. Without adducing anything resembling, you know, evidence or proof or stuff, the “official” insisted that this plot involves officials at the “highest levels” of the Iranian regime.

As Patrick Cockburn points out, what this mystery-enshrouded guy was describing are improvised explosive devices of a sort that have been used by every guerrilla army for the past century. And it seems a touch unlikely, at least to rational people, that Iran's Shiite regime, which has been handed Iraq on a platter thanks to the U.S. Invasion, would undermine that achievement by supporting a largely Sunni insurgency.

The purpose behind the Bush Regime's “revelation” is utterly transparent, its evidence just as palpably false – so why was the charade of secrecy necessary? My guess is that this was a requirement imposed by whatever “official” was used as the aperture for the Regime's disinformation cloaca. The last fellow who was used thus was Colin Powell, and his reputation has never recovered.

Rumors/as of yet reported "facts" are now saying a third carrier is steaming for the two that are presently in the straights. Well, if that isn't a sign that we're being set up for the inevitable I don't know what is.

For those who don't care... just tune back to American Idol and continue your reprogramming.

do you create those pictures yourself? they're hilarious!

I like those images you find round about the 'net as well ;).

Was Dubya really that candid as depicted in the first image? I guess I don't pay enough attention to his utterances anymore. I'm not surprised, of course, but I just didn't see/hear him say it.

When politicos can be that candid with their utterances and there be mere silence, it's a telltale sign that the populace is hopelessly statist-minded at this point. I hear the statists constantly on the local news about some new law, new regulation, etc., all in the name of children, safety, security, and on and on, so I can only imagine how bad it is nationally.

Meanwhile, while possible expansion of the war into Iran and the executive branch's utterances/actions have many folks' focused attention, yet another ADL-sanctioned "hate crimes" bill, H.R. 254, which would of course be nationwide in it's jurisdiction, has been introduced in the House. And judging by some of the responses to e-mail alerts sent to ordinary commoners, many see nothing wrong with it apparently.

Will, I'm getting to the point where I don't care about this crap country anymore. I'm already trying to imagine in my mind a long stay in an 8x10 cell at some point in the future because I'm not changing my views and will continue to tell it like I see it, regardless of what any unconstitutional law declares.

There's many more enemies within this country than without and we're destroying ourselves quite nicely, no assistance from abroad required. The Gramscian collectivists never will end their war on genuine freedom all the while the populace is ever more complacent. They're too busy watching the mindless trash tube, working their jobs (or collecting their entitlement), gambling with government (lotteries) and the private sector (casinos), you name it.

yes. bush made those statements. there's an audi out there somewhere. he was talking to an audience about social security and that quote of his popped out. now, if will had posted the entire comment, you would have been floored cuz he said something to the effect of "you see....i keep saying that, that's about the third time i've said it....
sometimes you gotta say things over and over again until the truth sinks in...you know, to catapault the propaganda.

mmy draw dropped. it didn't know whether to laugh or cry when i heard it.

Oh, it gets better and better. This was just said the other day.

"Asked by an ABC reporter whether he thought Iraq was roiled by civil war, Bush said, "It's hard for me living in this beautiful White House to give you an assessment, a first hand assessment. I haven't been there. You have, I haven't. But I do talk to people who are and people whose judgment I trust and they would not qualify it as that. There are others who think it is."

What a psychotic nut!