The Regime's Liturgy of Terror 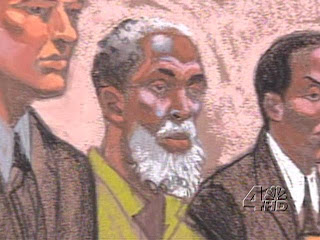 The process is as predictable as a Jay Leno punchline -- or, put another way, as familiar as a liturgy:

The Feds will announce that they have aborted a terrorist plot, one that, if allowed to come to term, would have been more devastating that 9-11; the claim is retailed uncritically by the media, and lovingly embroidered by the Regime's assets in talk radio and the blogosphere.

While an easily distracted public absorbs the lesson taught in the headlines – to wit, that there are people constantly plotting to murder Americans by the thousands – a few detail-obsessed people will notice the fundamental implausibilities in the official account. One critical detail will quickly be acknowledged, and just as quickly ignored by the media: At the center of the supposed plot is found a “Confidential Informant” (a snitch/provocateur) of highly dubious character.

What appeared to be a deadly terrorist cell, on closer (or even cursory) inspection, now appears to be a tiny knot of untrained and inept radicals who displayed no interest in terrorism or ambition to carry out such crimes until the Federal Informant arrived and provided a catalyst. But before the implications of this discovery can be widely understood or appreciated, the Regime's opinion-molding apparatus has moved on, leaving behind another sedimentary layer of official disinformation.

As the immortal H.L. Mencken famously put it: “The whole aim of practical politics is to keep the populace alarmed (and hence clamorous to be led to safety) by menacing it with an endless series of hobgoblins, all of them imaginary.” Although terrorism isn't an imaginary menace, it is a grotesquely over-rated one: Among causes of death for ordinary Americans, terrorism ranks somewhere south of peanut allergies, lightning strikes, rogue deer on highways, and – this is an important point – armed law enforcement agents. Terrorism has become the defining anxiety of our age through the combined mendacity of the rulers, the cravenness of the media, and the credulity of the public.

Of all the potential threats at an airport, these guys are by far the deadliest.

All of this is splendidly illustrated by the supposed threat to blow up JFK International Airport.

Four Islamic radicals, led by a retired cargo worker, supposedly planned to ignite subterranean fuel supply lines, thereby causing a chain reaction that would destroy the airport and much of Queens, New York in a gotterdammerung worthy of a Die Hard film.

Russell “Mohamed” Defreitas, the 63-year-old alleged mastermind of the supposed plot, reportedly told the Federal Informant/Provocateur that detonating the fuel tanks and supply lines would lead to a cataclysm so huge “even the Twin Towers can't touch it.... [T]his can destroy the economy of America for some time if it falls into the right hands.”

The chief problem with this alleged plot – apart from the fact that those involved in it had none of the training, technical skills, or connections to carry it out – is that it wouldn't have worked. As technical experts and security analysts point out, jet fuel is difficult to ignite, and the fire itself would have been contained. The result would not have been a huge explosion, but the equivalent of a damp squib.

The criminal complaint (.pdf) outlining the alleged conspiracy offers a very small bag of bones from which to construct a T-Rex. Defreitas, a former baggage handler at JFK, is a believing Muslim with a number of grievances against the US:

“DEFREITAS claimed that, while working at JFK airport, he saw military parts being shipped to Israel, including missiles, that he felt would be used to kill Muslims. According to DEFREITAS, as a result, he `wanted to do something to get those bastards.'”

While working at the airport, Defreitas recalled in talking with the Informant, “these things used to come into my brain – well, I could blow this place up.... I could make a bomb. I could knock this place – I ain't getting' nothin' for it. So I would just wipe it out of my head. And then I would go some place again, and I would see the same thing. And I would sit and see a plane taxiing up the runway. And I would say, if I could get a rocket, then I could do a hit. By myself, I am thinking these things. But I had no connections with no Arabs or anybody – I'm a Muslim working in the airport for so many years..... [N]obody ever approached me.”

In 2004, someone did approach Defreitas: The Federal “Source,” identified in a footnote to the complaint as an individual “convicted on federal drug trafficking and RICO charges ... in 1996. The Source was also convicted on drug trafficking charges in New York Supreme Court in 2003. His sentence in that case is pending as part of his cooperation agreement with the government. In addition to the expectation of a reduced sentence in exchange for his cooperation, the Source also receives financial assistance.”

So the “hero” in this scenario is a twice-convicted drug trafficker who worked as a paid informant for the Feds, an individual subject to potent incentives to tell his handlers whatever they wanted, and needed, to “know.” The complaint also specifies that it was the “Source” -- the Informant/Provocateur – who purchased the video camera with which Defreitas “performed physical surveillance [and] made video recordings of JFK and its buildings and facilities,” which was the key overt act in furtherance of the supposed bombing conspiracy. This is to say that the complaint itself documents that the “Source” materially abetted the alleged crime.

It must be acknowledged that the complaint offers at least one critical disclosure about a long-extant security threat at JFK:

“DEFREITAS told the Source that years earlier he had conducted multiple tests of the security at JFK. He explained that he had previously been able to access restricted areas while visiting friends who worked at the airport, but that now identification was needed.”

Former Customs investigator Diane Kleiman is very familiar with the situation Defreitas describes. Before being assigned to work at JFK in 1999, Kleiman had been an assistant prosecutor in New York, put in time at the Immigration and Naturalization Service and BATF, and – to her considerable credit – done volunteer work for the Innocence Project.

As a rookie Special Agent working for Customs at JFK, which she describes as “the biggest border crossing for the United States,” Kleiman discovered a culture of corruption and cronyism that resulted in severely compromised security. For example: Shortly after Kleiman began working with Customs at JFK, a drug bust netted $750,000 in cash. Very quickly, she recalls, the official figure was reduced to $492,000, of which she was told to report $452,000. Where did the missing amount – either $44,000, or as much as $258,000 – end up? Somebody knew, and nobody was telling, and her supervisors made it clear that they weren't going to let some “junior Jew bitch” (their pet nickname for Kleiman) make an issue of it.

Within a very short time, Kleiman discovered other causes for alarm, such as the fact that “countless people, including minimum-wage employees who'd probably never had a background check and were sometimes even in this country illegally, had unfettered access to the planes while they were being cleaned and refueled between flights,” summarized a New York magazine account: “Once they got on the ramps – the supposedly restricted area where the planes sit parked at the gates – baggage handlers, maintenance workers, food-service employees, and ground personnel all had unmolested access to the aircraft. They could walk onto a plane, hide a weapon or place a bomb somewhere, and walk off without being questioned.” They had only to show an ID at one security checkpoint, without going through any of the invasive security searches to which airline passengers must now submit.

Kleiman had a hands-on role in a second drug bust, this one involving more than 46 pounds of cocaine, revealed that some airline personnel at JFK were using their secure keys to sneak smugglers though “sterile” corridors without passing through Customs. According to Kleiman, her superiors released all of the suspects except for the “mule,” destroyed her case notes, falsified records, and warned her not to publicize her discovery. The idea was to make it look as if Kleiman's arrest was a random event, rather than something akin to standard operating procedure for Customs. She says that her immediate superior, Tom Flood, made less-than-subtle threat against her mother as a way of shutting her up.

Identified as something other than a “team player,” Kleiman was frozen out of assignments, subjected to incredibly degrading treatment (a fact confirmed by a second employee at JFK Customs), saw her official evaluations re-written to denigrate her job performance (she had taken the precaution of photocopying the originals), and eventually fired. All of this happened long before 9-11, an event that shocked but did not surprise her. At the time the Towers fell, Kleiman was living just a few blocks away. 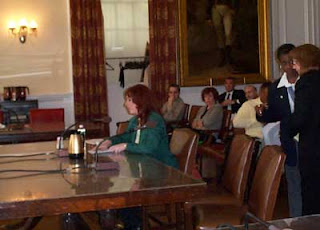 In a 2004 radio interview, Kleiman expressed her disillusionment over the various “wars” -- the “war” on drugs, the “war” on terror – that are staged by the Regime to consolidate its power. The “war” on drugs, she points out, is a cynical exercise in which a virtual quota system exists: The traffic is interrupted by an occasional high-profile bust to provide pretexts for funding increases and bureaucratic promotions. “All they're after is the stats,” Kleiman observes.

The “war” on terror is even worse, by a couple of orders of magnitude: “Government is simply exploiting it [terrorism] to take power from the middle class, more than anything else.” She doesn't flinch from using the “F word” -- fascism – to describe the system under which we are now living.

Our version of that system eschews the lurid pageantry that typified its German and Italian predecessors. But as the most recent installment of its official melodrama indicates, uncovering terrorist plots serves a central role in the Regime's liturgy of total power.

Please drop by The Right Source for non-regime-sanctioned news and commentary.

Hey Will...when do we get the "Printer friendly" option for these excellent posts??

I love the righteous fury with which Keith Olbermann speaks.

A Radical Whig in Chattanooga said...

The timing of this, falling just before CNN's Republican Debate up in New Hampshire, is interesting! Was it maybe done to give Benito Guiliani something to talk about?

The neocons need to keep us scared, don't they!

Only a few chosen humans can really see the light of truth.