One Small Victory Over Leviathan

The son of an FBI agent, Richard Mack attended the Bureau's training academy and aspired to become a G-Man himself. When that career didn't materialize, he ended up in Provo, Utah, the community made famous (after a fashion) in Fletch.

It was the early 1980s; hair was big, ties were skinny, and the “War on Drugs” was just beginning to grind our liberties to dust. Mack, under the nom de guerre “Gary Layton,” worked as an undercover narc, in which capacity he was occasionally required to partake of the demon weed. He got promotions; the people who passed him the bong got prison time. The patent hypocrisy of this exercise was not lost on Mack.

After his undercover gig, Mack was transferred to traffic enforcement, where he experienced an epiphany.

“One day, while on patrol, he parked his police cruiser near an elementary school to review a report,” recounted a 2003 Salt Lake City Weekly profile. “He saw a woman run a stop sign. She saw him see her. She pulled over without instruction from flashing police lights. Mack thought to himself, `This will be easy.' When he approached her car, she handed over her insurance and license information through an open car window without saying a word. Mack thought again, `Good, this will be easy.'”

But as he peered into the car, Mack felt his conscience rebel.

“I looked down at this dilapidated, old, crappy car with this 35- to 40-ish woman going on 85, and she had this dejected stare. Her kids were fighting in the back. They looked unkempt. I knew she did not have the money that this ticket was gonna cost her. I looked at her children and her crappy old car, and then I looked at me.”

At that moment, Richard Mack's priorities were rearranged by the tidal pull of something foreign to most people who wear state-issued costumes: A sense of decent shame over what he was required to do.

Instead of “protecting and serving” this over-worked, financially desperate woman, he was “taxing and harassing” her. As he tells the story, Mack decided on that day he “would never be on the wrong side again.”

This didn't mean leaving law enforcement. Mack moved to Arizona, where he was elected Sheriff of Graham County. In addition to dealing with the sundry and manifold petty crimes that afflict every community, Sheriff Mack confronted the world's largest and most powerful crime syndicate – the US Federal Government – and won, even though that victory cost him his job.

Ten years ago tomorrow (June 27), the US Supreme Court ruled in favor of Sheriff Mack and Jay Printz, the Sheriff of of Montana's Ravalli County (below) , striking down provisions of the so-called Brady Act that required state law enforcement officers to carry out background checks on gun purchases. By the time the ruling was handed down, Mack was out of office. 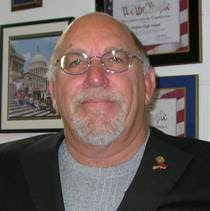 The first and less important objection offered by Mack and Printz to the Brady Law was that conducting background checks would be inordinately time-consuming.

The second and immeasurably more important objection was that the law impermissibly required state governments (in the words of Justice Scalia's majority opinion) “to enact or enforce a federal regulatory program ... by conscripting the State's officers directly. The Federal Government may neither issue directives requiring the States to address particular problems, nor command the States' officers, or those of their political subdivisions [such as counties], to administer or enforce a federal regulatory program,” such as the Brady Bill's limitations on firearms purchases. Doing so, Scalia wrote, is “fundamentally incompatible with our constitutional system of dual sovereignty.”

Scalia's conclusion is serviceable, if expressed with only a fraction of the outrage warranted by Wasington's criminal assault on the innate rights of individuals and the reserved powers of the states.

In his concurring opinion, Justice Thomas added an interesting nuance to Scalia's argument, noting that Congress has no authority to regulate “intrastate, point of sale transactions,” including those dealing with firearms. He also pointed out that if the Second Amendment “is read to confer a personal right to `keep and bear arms,' a colorable argument exists that the Federal Government's regulatory scheme, at least as it pertains to the purely intrastate sale or possession of firearms, runs afoul of that Amendment's protections.” (Emphases in original.)

Once again, Thomas comes infuriatingly close to making sense, only to flinch at the last moment.

The Second Amendment “confers” nothing on anybody; instead, it forbids the central government to take any action that would infringe on a pre-existing individual right that had the felicitous side-effect of providing individual states with the ability to muster militias in their defense – against both foreign enemies and, when necessary, the central government itself. Since the Brady Act targeted point-of-sale transactions, it was unconstitutional on its face. But this is also true of purely interstate commerce in firearms, since the Second Amendment forbids Congress to use its power to regulate commerce in a way that would infringe on the individual right to armed self-defense.

Since those opinions were written ten years ago, Scalia and Thomas have shed whatever residual loyalty they had to genuine federalism and become reliable supporters of the Homeland Security State. Scalia, in fact, now worships at the First Church of Jack Bauer, whose chief tenet holds that the powers exercised by the central government are defined by necessity, rather than law.

Just in the last year, the Bush Regime has made the extraordinary if predictable claim that any law enforcement department that receives a farthing of federal support is an affiliate of the federal government, thereby nullifying the good done by the lawsuit filed by Sheriffs Mack and Printz. But this doesn't mean that their effort was a waste of time.

Richard Mack and Jay Printz (who retired in 1998) were constitutionally minded peace officers who represented the last of a dying breed -- and that breed isn't going extinct because of natural causes.

Keith Humphrey of the Christian Liberty Party, one of the brightest and bravest people I know, has created an on-line archive of my "Liberty Minute" daily radio commentaries; new segments are posted each weekday. Please check them out.

We are working to get another edition of Pro Libertate the e-zine completed as soon as possible.

Please be sure to visit The Right Source.
at 2:58 PM

I sincerely hope that your wife's medical problems prove to be minor and that she recovers quickly.

Jorge -- thank you so much. She's doing somewhat better tonight (at least she's sleeping comfortably, something she wasn't able to do for an entire week), but we'll have to see how things develop over the next several days.

Your kindness to our family is deeply appreciated.

Will -- My the good Lord provide you and yours even more strength during these difficult times. And from me, personally, you have my greatest admiration for all you do.

One of P.J. O'Rourke's better books was entitled Parliament of Whores; the 'Parliament' in the title ultimately referred to the American populace, which the author concludes will do pretty much anything to keep the Federal dollars rolling in [apparently not worrying about the origin of such funds].

States and municipalities fall into the same slot: they love those Federal dollars rolling in, and do not seem to mind yielding their sovreignty to the Feds as long as the money keeps coming. The Feds are wise to such, and ferociously use this 'power' to maintain control of state and municipal jurisdictions.

All we have to do to overcome much of the Fed's control is to refuse its money. Yet, very few do.

I am glad to hear that she is feeling a bit better.

If you find that the financial costs are getting out of hand, or simply wish to investigate other options, I can find the costs of treatment in Costa Rica.

Please do not hesitate to contact me if I can help.

Like 1957human, you have my greatest admiration for all you do.