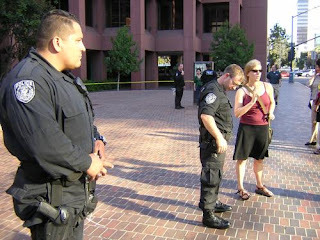 “It will be of little avail to the people, that the laws are made by men of their own choice, if the laws be so voluminous that they cannot be read, or so incoherent that they cannot be understood; if they be repealed or revised before they are promulgated, or undergo such incessant changes that no man, who knows what the law is to-day, can guess what it will be to-morrow. Law is defined to be a rule of action; but how can that be a rule, which is little known, and less fixed?...


Every new regulation ... presents a new harvest to those who watch the change, and can trace its consequences; a harvest, reared not by themselves, but by the toils and cares of the great body of their fellow-citizens. This is a state of things in which it may be said with some truth that laws are made for the FEW, not for the MANY.”

In 1791, when the republic Madison and his colleagues created was new and the Constitution enjoyed a decent chance of survival, there were 17 federal criminal statutes on the books. Two hundred years later, that figure had grown to several thousand.

Given the protean nature of the federal criminal code, more specificity about that figure is impossible: Every congressional session results in a new set of legal instruments intended for use in the corrupt “harvest” referred to by Madison. The Federalist essay containing that figure of speech, incidentally, argued that the federal legislative branch would be a check against the heedless proliferation of recondite laws. If only it were so.

More than half of the countless thousands of federal laws enacted since the War Between the States, notes Ted Gest of the University of Pennsylvania, were passed after 1970. Delaware Senator Joe Biden, who has done more than his share to abet the malignant growth of the federal criminal code, proudly explains: “We federalize everything that walks, talks, and moves,”

In his book Crime & Politics: Big Government's Erratic Campaign for Law and Order, Gest points out that since “it's possible to identify some interstate nexus with virtually any crime, just about anything goes when it comes to making a theoretical federal case for some category of violations.”

Obviously, this represents an inversion of the constitutional order described by Madison in Federalist number 45, in which the central government would have “few and defined” powers, and the “numerous and indefinite”powers reserved to the states would include practically everything having to do with criminal justice and law enforcement.

Of course, States, counties, and municipalities emit countless laws as well, most of them quite foolish, almost all of them unnecessary. But their chief purpose today is to serve as administrative units of the all-powerful central government, with their law enforcement agencies increasingly funded and controlled by Washington.

Gest (who doesn't object in principle to this subversion of the constitutional system) points out that the process through which “local” police became militarized instruments of the central government began in the late 1960s with the advent of the Law Enforcement Assistance Administration (LEAA), through which States and cities received “large infusions of federal aid” as part of a supposed effort to “reduce local crime.”

The LEAA was headed by a triumvirate, the composition of which reflected the partisan affiliation of the incumbent president: Under LBJ and Jimmy Carter, it was staffed by two Democrats and a Republican, with that alignment reversing under Richard Nixon and Gerald Ford.

From its inception, the LEAA encouraged the militarization of police departments (among its first police grants were funds for paramilitary riot suppression gear and the purchase of “Big Bertha” vehicles – tanks modified for inner-city patrols) and plied them with subsidies of every description as a way of redefining their loyalties. 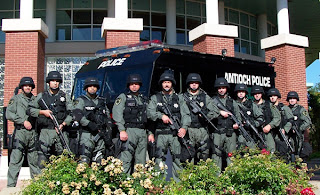 At the same time, the agency also dispensed huge sums “to improve the criminal justice system across the board,” notes Gest. Such “improvements” inevitably made local courts subject to federal control. If judges wanted aid, explained on LEAA triumvir, “they shouldn't be able to dictate the terms and say, `I'm the chief judge of the criminal court, and I'll run my court the way I want to.' Our message was, `Judge, you can't do that anymore.... The system has to improve.' We forced people to work together through the carrot and stick approach.”

People were to “work together” toward what end? Norval Morris, who was nominated serve as an LEAA administrator during the Carter administration, offered a glimpse of one potential destination in a 1969 book called The Honest Politician's Guide to Crime Control, in which he called for a “disarmed populace” -- a universal ban on civilian handgun ownership, and severe limitations even on the use of firearms in hunting.

Many lawmakers on both sides of the aisle regarded the LEAA with suspicion, and by 1979 the agency was mired in well-earned disrepute. Accordingly, it was disbanded, its entire staff banished from government employment, and the concept of federal control over local police was abjured by penitent legislative and executive branch officials in a solemn ceremony of official repudiation.

Like many other parasites, the LEAA reproduced through fission, dividing itself into similiarly self-replicating bureaus within the Justice Department – the most prominent being the Bureau of Justice Assistance -- the ever-helpful agency in charge of handing out largesse in the form of Byrne Grants and other lethal federal subsidies.

Of the more than 800 chair-moisteners “working” at LEAA's Washington office at the time of its formal dissolution in 1982, only 18 suffered the “indignity” of being forced to find relatively honest employment.

The rest of them insinuated themselves into the law enforcement bureaucracy, where they encouraged the metastatic growth of the federal criminal code. They eagerly promoted the Reagan-era escalation in the “War on Drugs,” and enthusiastically backed federally dictated mandatory minimum prison sentences for various trendy offenses. LEAA vets (including Ed Meese) were also heavily involved in promoting the Reagan-era prison-building boom: The Reagan administration spent some $2 billion on prison construction, even as Congress devised increasingly inventive ways to fill them up.

The late 1980s introduced an ominous new trend that could be called “therapeutic law” -- statutes like “hate crimes” laws intended to punish incorrect attitudes, rather than offenses against persons and property. In the early 1990s that trend expanded to include measures like Joe Biden's Violence Against Women Act, under which domestic violence became a federal concern.

All of this followed a path that had been blazed by the LEAA, and more than a few veterans of that agency's spoils system played important roles in both conceiving and implementing those proto-totalitarian measures. 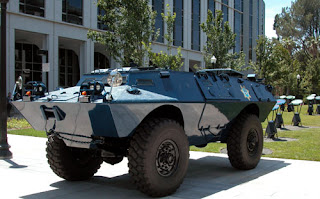 It must never be forgotten that every law carries with it the implicit threat of lethal force; this is particularly true of those enacted by the central government. To reasonable people, 17 such laws is more than half again too many, given that the only Being entitled to dictate laws thought that 10 was quite sufficient.

Under our present system, Americans are burdened with at least 10,000 federal “laws,” most of which they've never heard of. That represents, in principle, at least 10,000 ways to die at the hands of the State's enforcers.

*My thanks to the incomparable Joseph Sobran for bringing this passage to my attention.

Be sure to make The Right Source part of your daily information diet!
at 9:58 PM

It was through LewRockwell.com that I "discovered" Sobran. Who would have thought. And I have to say that he has been gracious enough to reply to my email messages. That says something when someone cares enough to reply. And because of that bit of humanity I even hunted down his book on Shakespeare, hard as it is to find now, and read it.

On the matter of federal, or any governmental statutes, I've come to believe that its entirely deliberate. Because in order to justify the expansion of the State and its intrusive powers you have to have "law breakers" and thus when someone tries to wriggle out of these diktats the "law givers" shake an accusatory finger and belllow out, "See!... Thats why we NEED these laws"... and thus add additional burdens that cause more people to fail their masters ever increasing expectations. And so it goes.

The cycle cannot be broken or elliminated from within because that would mean they would have to recognize a "force" or "power" greater than themselves. Has anyone seen government work to eliminate its existence? Didn't think so.