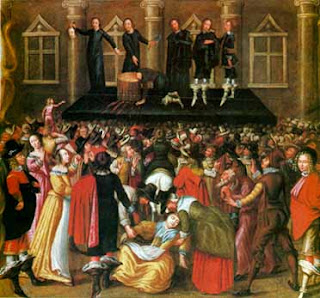 The execution of King Charles I:
How Parliament disposed of that tyrant's claims of "executive privilege"

“Treason is a matter of dates,” insisted Talleyrand, who despite being a physical cripple was ideologically double-jointed and thus (unlike many of his revolutionary comrades) was able to keep his head attached to its neck.

White House spokesliar Tony Snow displays more than a touch of Talleyrand in his ardent defense of what he once reviled – the concept of executive privilege.

In a syndicated column published in March 1998 (exhumed by the redoubtable Glenn Greenwald, and given wider circulation by Editor & Publisher), Snow waxed indignant about the Clinton junta's invocation of executive privilege in an effort to deflect the Ken Starr inquiry:

"Evidently, Mr. Clinton wants to shield virtually any communications that take place within the White House compound on the theory that all such talk contributes in some way, shape or form to the continuing success and harmony of an administration. Taken to its logical extreme, that position would make it impossible for citizens to hold a chief executive accountable for anything. He would have a constitutional right to cover up.”

Nearly a decade later, as the spokesman for a regime whose criminal behavior eclipses that of the Clintonites, Snow has discovered that the concept of executive privilege is the highest and most sacred governing principle.

In fact, as he informed CBS's Harry Smith during their recent dust-up, from the perspective of the Bush regime, “Congress ... does not have constitutional oversight responsibility over the White House.”

Snow's comment was one of those instances in which the essential fascism of the Bush regime vents to the surface, in the fashion of a gust of superheated, toxic gases seeping to the surface as an overture to a volcanic eruption.

(Another memorable instance occurred last year when a loyal Bushevik in the "Justice" Department told Senator Patrick Leahy – in all apparent seriousness – that “the president is always right.”)

From the Bushevik perspective – which is the distillation of the power-obsessed cult that conservatism has become – the presidency is a self-existing entity superior to every institution under heaven (and, on a good day, superior in some respects to Providence Himself).

This doctrine is alien to our Constitution, and to the Anglo-Saxon tradition of liberty under law. It does have a precedent, however, in the royal privilege claims asserted by King James I, the sexually depraved early 17th Century English monarch, in his essay Basilikon Doron, a document intended to tutor his son in the ways of royal absolutism. The doctrine contained in that tract was nothing less than a prototype for the modern totalitarian concept of Fuhrerprinzip.

“James preached the benefits of what would now be described as a benign political and spiritual dictatorship, in which the King governed through an elite, chosen and discarded at his own discretion, comprising his ministers, his bishops and judges, who must never question the royal prerogative, for `that is to take away the mystical reverence that belongs to those that sit in the throne of God.'”

“In this Stuart utopia,” comments Robinson, “Parliament was irritating and irrelevant,” and the king was to be regarded as “`absolute master of the lives and possessions of his subjects; his acts are not open to inquiry or dispute, and no misdeeds can ever justify resistance.'”

James' successor was his small, stammering and petulant son Charles, who (in Robertson's words) “grew up in a narcissistic cocoon, unconcerned about the feelings and aspirations of other classes and citizens....”

Charles I was, in every significant way, a precursor to George W. Bush.

Charles built upon his father's legacy of regal lawlessness; his escalating conflict with Parliament included usurpation of the Parliament's power to enact taxes, and corruption of the judiciary into a servile tool of the throne through the notorious “Star Chamber” courts (which were inspired by similarly discreditable tribunals created by previous monarchs). He suspended habeas corpus and claimed the right to imprison people indefinitely at whim “by His Majesty's special command.”

Angered by these usurpations, and anxious to preserve the liberties won at Runnymede, Parliament enacted a document called the Petition of Right, intended to provide statutory protection for ancient rights; it reaffirmed the habeas corpus guarantee, extended protection against the quartering of troops in civilian homes, and prohibited the king from imposing martial law in peacetime.

Charles suffered the Petition's enactment, and promptly dismissed it. Eventually he dissolved the Commons, and during the entire decade of the 1630s refused to convene Parliament, ruling as a royal dictator. In 1642, the conflict between the Parliament and Throne blossomed into full-fledged civil war, which culminated with the trial, conviction, and execution of King Charles for treason.

“It had been with the criminal object of securing unlimited and tyrannical power that Charles I had levied war against Parliament and had set out to destroy the very people whose life and liberty he was obliged to preserve,” writes Robertson.

There is no reason to believe that Bush is less than deadly serious about his intent to deflect congressional subpoenas to protect his courtiers. Previous presidents who have dealt with similar challenges – Nixon, during Watergate; Reagan, during Iran-Contra; and even Clinton during the Lewinsky disgrace – have eventually deferred to Congress, rather than defying it.

Bush will almost certainly defy Congress. And if the conflict escalates further, he may eventually have to exercise the usurped powers he claimed last October 17, when he signed into “law” two measures that would establish his own version of the Star Chamber courts and use the National Guard as his proprietary army.

Even if he should decline to employ such severe means, George W. Bush, like his predecessor Charles I, would have to make war on the legislative branch -- either literally or in everything but name -- in order to defend royal prerogatives alien to our Anglo-Saxon heritage of law.

That was treason in 1642, and it remains treason today – the sophisms of Talleyrand and Tony Snow notwithstanding.

Please visit The Right Source for freedom-centered news, commentary, talk radio -- and an action program to take back our liberty.

We can thank the indomitable Oliver Cromwell for being the central Parliamentarian figure in the First and Second English Civil War as well as the eventual capture and eventually the execution of Charles I in 1649.

Yet, on an unrelated matter, Will, I’m somewhat troubled as to why it is that your usually healthy cynicism and skepticism about “the State” in the abstract, and the humanoids who work on behalf of the State within, only seems to apply to the State? I am, like you, cynical and skeptical of State motives in any endeavor with which it involves itself to be sure; there’s demonstrable tangible evidence proving that truth.

However, on the other hand, your link to the site describing the alleged depravity of James I as well as Francis Bacon and other aristocratic figures in history was interesting. These sources’ motives are always suspect in my mind whenever the main topic of dissection with these historical figures, they apparently focus like an eagle upon, is their apparent “gayness” or homosexual proclivities. In addition, many of these modern sources, who obviously seem to relish attempting to “normalize” this depravity by characterizing well-heeled folk as similarly so inclined, like Norton, are not by the way repulsed in any way by these revelations, like most would be, but are fully supportive of it. I’m not saying it’s outright false, but I’m also not going to accept these kind of characterizations ex facie from the likes of Norton either. Remember Will, there’s a culture war goin’ on and it permeates not just Hollyweird, the government, the schools, but especially history and media also. History is by no means off limits to revisionism and Gramscian propaganda.

And I don’t think it’s merely “coincidental” in this day and age that it seems as if many historical figures are being increasingly “discovered” as being of this lot and so maligned. They also conveniently happen to be notable figures, or even heroic figures in many quarters, who most thought previously were of stalwart character, like Francis Bacon among others. I mean, it is interesting to note in this particular case that the KJV of the Bible was sponsored by this very king.

Again, I’m not saying one way or the other way about whether King James’ true character matching this portrayal is true, half-true, or false; it could be true, half-true, but it could also very well be a damn lie. Do you not also view with a high degree of skepticism these kind of “fab” portrayals from non-State entities and/or individuals? Or do you eagerly accept, prima facie, without in-depth investigation any ugly portrayal of a figure who just happens to be a part of Leviathan?

I guess one could view King James I similarly to how one could view King David in the Bible. Assuming James I fell into the sodomy pit, David fell into the adultery pit with Bathsheeba, and then jumped headfirst into the murder pit killing her husband, Uriah, to cover up his adultery as well. That first child dies; David confessed and repented, but the consequences of the sins are nevertheless far-reaching and would afflict David the rest of his life. Jame’s son Charles I took the row between the Royalists and the Parliamentarians to the greatest pinnacle, including two civil wars, was eventually captured, and ended up executed by the Parliamentarians in 1649. David’s son Absalom rebels against his father and is killed in a clash between his forces and his father David’s under Joab.

Yet, in spite of all that, David was “a man after God’s own heart.” Hmm, how can that be? I guess it signifies to some extent just how dark ALL humans are inside, eh Will?