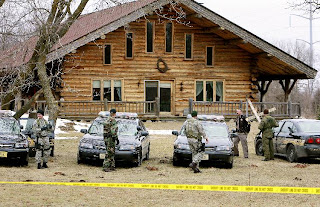 At least they didn't call the log cabin in rural Wisconsin a “compound.”

That's most likely because the anticipated standoff didn't occur. If if had, then the farmhouse in the photo above would have been transformed into an "armed compound," in keeping with the tacit but strictly enforced rules governing mainstream media accounts of armed confrontations involving federal enforcement agencies.

The fact that nobody was hurt or killed is the only positive thing one can say about the paramilitary raid – involving sheriff's departments from three counties, a SWAT team, and agents from the ATF and FBI – on the Rio (RYE-oh) Wisconsin [actually, Wyocena -- correction courtesy of an alert reader] homestead of 64-year-old Lester Sundsmo and his 56-year-old wife Lilac.

The joint federal-local attack on the Sundsmo home involved more than 100 agents swarming the property, and a roadblock that shut down state Highway 16 [in fact, contrary to initial media reports, it was Highway 51 -- thanks again to my courteous and well-informed reader.] The couple themselves were arrested without incident at a traffic stop roughly a half-mile from their property.

A total of four (4) firearms were found on their property; the invaders also took note of a network of underground tunnels that were immediately (and predictably) described as evidence of preparations for a confrontation with law enforcement, but are more likely intended to serve as a storm shelter.

Why was it necessary to deploy practically a brigade-strength force against a retirement-age couple accused of a non-violent offense?

“That was required because of past intelligence,” insisted Chief Deputy Michael Babcock of Wisconsin's Columbia County. “The intelligence that was secured by multiple law enforcement agencies indicated that there was likely going to be some type of confrontation if we had to go to the door of the residence.”

The “intelligence” refers to thus far undocumented suspicions that the Subdsmos, who possess some exotic beliefs concerning sovereign citizenship, are affiliated with the “Posse Comitatus” movement or some other “anti-government” group.

Any sentient human being possessed of so much as a molecule of decency should be “anti-government.” The Sundsmos, who were scheduled for eviction from their home as a result of thousands of dollars in unpaid property taxes, had decorated their property with signs advising parasites from various appendages of the Regime to stay away.

They didn't conceal their contempt for the bureaucrats who infest their community and the thugs in their employ, so it was hardly an intelligence coup to learn that the Sudsmos didn't much care for government. Babcock summarized those views thusly: “They question the legitimacy of the Constitution, of the legislature and government processes.”

I'd wager platinum to potato chips that the Sudsmos do not question the legitimacy of the Constitution, but rather the constitutional legitimacy of actions taken by the state legislature and carried out by county officials. But hey, “close” is good enough for horseshoes, hand grenades, and arrest warrants to be served by armed gangs against non-violent eccentrics in rural Wisconsin.

Babcock said he was “relieved” that no injuries resulted from the raid. Well, the same could be said by any decent person, who would probably add: “Given your perverse determination to deploy a military strike team against the couple, it's something akin to a miracle that you didn't get anybody hurt or killed, you tax-devouring cretin.”

The militarized assault, following established customs in the embryonic American Reich, was conducted to “serve a warrant” charging the Sundsmos with “criminal slander” against various local officials. The ten-count criminal complaint is devoid of any alleged violations of federal law – which means that the use of federal assets in staging the raid was a crime against the Constitution, a fact that once meant something.

The “slander” in question consisted of liens filed against various officials, including the former sheriff and district attorney, as well as officials of a local bank, all of whom were involved in the tax foreclosure of the couple's property. These instruments were transparently bogus, and utterly unenforceable.

But because of the diligent efforts of totalitarian-minded groups like the so-called Anti-Defamation League and the Southern Poverty Law Center, false liens of this kind are now categorized as “paper terrorism” -- which means that those who file them are treated as kindred to hijackers and car-bombers, rather than desperate, misguided people lashing out in frustration at a corrupt system, and choosing a spectacularly ill-advised way to do so.

More will be published about this case as details become available.

(There has been some speculation that the body of Beth Kutz, who was murdered by her estranged husband several years ago, may be buried on the Sundsmo property; if this proves to be the case, it wouldn't necessarily mean that the couple had anything to do with that hideous crime -- and if they did, they were extravagantly foolish to bring attention to themselves.)

Be sure to visit The Right Source for your "anti-government" news and commentary.

This is one of many cases where the local government is seizing private property on account of the property owener failing to pay property taxes. It seems to me that the whole notion of an individual being able to own priviate property in this country is an illusion. Allow me to explain.

The fact is that if the government, under the color of law, has the ability to seize a persons land and /or home for failure to pay a tax (a tax, by the way, whose constitutional legitimacy I question), then the person in question does not own the property, but rather the property in question is merely leased from the local government. Property seized under such circumstances is sold off at auction and, unless I am mistaken, the property owner most likely will never see a dime. The various lien-holders, e.g., the local government and the bank, abscond with the proceeds from the sale. The property owner is left only with the debt from the portion of the mortgage that the auction did not cover since properties auctioned under these circumstances rarely brings anything resembling full market value.

What are your thoughts on this?

You are absolutely correct. I work for a timber investment firm, in New England, and on occasion acquire timberland parcels via tax sale auctions. All profits from the sales minus any liens or other liabilities go straight into the mouth of our bloated local governments.It is sickening how huge our local and state governments are and the destructive effect it has having upon those who are "land rich" but "cash poor".

The Sundsmos are lucky that they are alive. The local media in southern Wisconsin played up the story that they were dangerous anti-government activists. When that didn't wash, local authorities tried to link the Sundsmos to the dissapearence of Beth Kunz, a young woman who was apparently murdered a few years back although her body has never been found. No body was found on the Sundsoms property either.

I shudder to think how government can trample of peoples' rights and no one seems to care.

This was in Wyocena, not Rio and it was highway 51 not 16. Otherwise, it is accurate.

Just a little update. They owed approximately $10,000 back taxes on property worth about $200,000. The mover, who claims he gave them a big break, submitted a bill to the county for $33,000. Now that isn't counting storage and other costs. As far as I can ascertain, the only "crimes" they have ever been charged with or traffic violation, ie: non registration and driving after revocation. A person who was at their initial hearing, claims they were railroaded at that hearing. Their trial is coming up very soon. I believe it is later this month.

Yes, I stand corrected. It was Wyocena and not Rio but it was highway 16