Today I'm inaugurating what I hope will be a daily morning news update. The longer essays will be published in the afternoon, hopefully on a daily basis, as well. If you've enjoyed what you read here, please let others know. Sometime soon -- hopefully before Thanksgiving -- I'm going to have some pretty exciting news about a new media venture I'm involved in.

The Sound of Someone Who's Sold His Soul, or "Now He Tells Us"

"There hasn't been any ideology in the Republican Party, any conservatism, for at least two to maybe four years," grunted the self-described national "Truth Detector" yesterday from near the bottom of the Slough of Despond. "[In] looking at what happened yesterday, it wasn't conservatism that lost [in Tuesday's mid-term elections]. Conservatism won when it ran as a Democrat. It won in a number of places. Republicanism lost."

There are those of us who have understood that the Republican Party has been barren of conservative principles for decades; we were neither surprised by, nor upset over, the well-earned butt-whipping the GOP took on Tuesday.

But then again, unlike Rush Limbaugh, people of that description haven't made a career out of being well-paid lickspittles for the Republican establishment.

"Now .. people have been asking me how I feel all night long,""continued Limbaugh, performing a familiar aria in the key of "me." I got, `Boy, Rush, I wouldn't want to be you tomorrow! Boy, I wouldn't want to have to do your show! Oh-ho. I'm so glad I'm not you.'.... The way I feel is this: I feel liberated, and I'm going to tell you as plainly as I can why. I no longer am going to have to carry the water for people who I don't think deserve having their water carried. Now, you might say, `Well, why have you been doing it?' Because the stakes are high. Even though the Republican Party let us down, to me they represent a far better future for my beliefs and therefore the country's than the Democrat Party and liberalism does."

You're not "liberated," Rush; you're utterly and permanently discredited. Had you made any effort at all to goad or shame the Republican Party into mimicking conservative behavior, you might enjoy a particle of credibility right now. As it stands, however, you're exposed to the public in the full, porcine malignity of your narcissism and opportunism. (I should also underscore the delerious self-preoccupation of someone who could say, with a straight face, that his "beliefs" that those of the country -- all 300 million of us -- are essentially identical.)

You're a whore, Rush; an Oxycontin and Viagra-addicted whore. Just own it.

And then go away.

Behind the Gates Appointment: The Bush Regime in Receivership

With the Republicans losing their political monopoly, there's been a slight but significant shift in the constellation of power in Washington. As Newsweek's Howard Fineman puts it, "a coterie of commercially minded globalists (as opposed to those ideologically minded globalists, the neocons)" are taking the bankrupt Bush regime into receivership. This is signified by the appointment of Robert Gates to replace Donald Rumsfeld at the Department of "Defense."

Gates is a veteran utility infielder for the Power Elite, a careerist in the national security state who has played a hands-on role in some of the seamier dealings of the past quarter-century. At the CIA, he was an apprentice to William Casey, a veritable Sith Lord. He was accused, plausibly, of being one of the Company Chefs who "cooked" intelligence on the Soviet threat in the 1980s to justify the immense arms build-up that supposedly bankrupted the USSR and "ended the Cold War" (which in fact could have ended any time the West decided to stop propping up the Soviet Bloc economically).

Gates was implicated in the Iran-Contra operation, and has been accused of participating, on behalf of Casey and the Reagan campaign, in backchannel talks with the Iranians in 1980 intended to prevent an "October Surprise" release of American hostages prior to the presidential election. The former charge is more plausible than the latter. But the most important charge against Gates is that he was involved, during the 1980s, in assisting Iraq's arms build-up.

"Under CIA Director Casey and Deputy Director Gates, the CIA authorized, approved, and assisted [Chilean arms dealer Carlos] Cardoen in the manufacture and sale of cluster bombs and other munitions to Iraq," testified former Reagan administration National Security Council staffer Howard Teicher in January 1995. Rather than following up on Teicher's disclosures, the Clinton administration -- which was top-heavy with people drawn from the same Power Elite that dominates the Bush regime -- "suppressed [his] affidavit and attacked Teicher's credibility," recalls former AP national security correspondent Robert Parry.

Here's the difference between Rumsfeld and Gates, where the build-up of Iraq's arsenal is concerned: 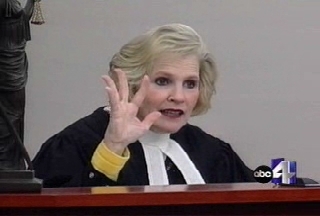 Buh-bye, Leslie. Don't get your robe caught in the door on the way out.


Dere Go De Judge -- or, as Hall and Oates would say, She's Gone

Reason was restored to the throne, and some semblance of judicial competence may soon be restored to Utah's Third District Court, as a result of Tuesday's retention election in Utah: "Judge" Leslie Lewis became only the second district judge in the state's history to be removed by majority vote.

In the theater of her undistinguished little mind, "Judge" Leslie was the star of her own series on the "Lifetime: Television For Women Who Hate Men" cable network. She became properly notorious for a February recusal hearing during which she expatiated at length on her aversion to hunting, and then contrived a situation in which she had a spectator handcuffed and jailed for the supposed offense of leaving her courtroom.
Go here for more details; go here for a video of the incident.)

This was the most widely publicized of numerous incidents in which Leslie displayed her consummate lack of professionalism, discipline, or judicial temperament. Leslie was saddled with the sobriquet "Ex Parte Girl" for pulling stunts like this one described by Salt Lake City's Deseret Morning News: "A local defense attorney spoke up about a situation in which Lewis, during a phone conversation, offered to take 10 years off a convicted sex offender's 30-year prison term, but told the defense attorney not to discuss the matter with prosecutors. If true, such an action violates the code of professional conduct that governs judges."

Leslie's well-deserved fate may have been sealed by pre-election publicity of a custody hearing earlier this year in which she made critical comments about the Mormon practice of baptizing children at age eight. "The child is too young," ruled Leslie of a dispute between divorced parents over baptizing their eight-year-old daughter. "The child will make the decision when she is twelve."

"And may I add my own personal story," Leslie continued, using -- as was her wont -- her courtroom to conduct some kind of personal therapy session. "That same thing [baptism at age eight] was done to me and I have resented it lo, these many years." Of the child at issue, Leslie concluded: "I doubt she will be favoring an early dunking. What's the rush? Are they afriad the child will change their mind when they are nine years old?"

As it happens, I don't disagree with Leslie's view of the practice of baptizing children at age eight -- but her Oprahesque tendency to view matters of this sort through the lens of personal psychodrama did illustrate, redundantly, that she had no business on the bench.

I like the idea of a daily "news and review", especially one hosted by you. I look forward to your upcoming announcemnet too.

Hoo-boy, Cap'n -- I'll have to put a disclaimer on the Rush Limbaugh photo.

I'll have to be a bit more judicious in picking out illustrations from the Google photo search....

If so, I'm in DEEP trouble.

So long as there is no manipulation of the whammy bar, and the action is closed.

On the general subject of techno-wankage, Cap'n, you'll notice that someone hacked my blog this morning.

I suspect it may be my old "friends" at JBS, who are obviously really busy saving freedom, or something.

I did not notice...what did they do?

"Megadittos" in regard to your comment about Limbaugh. Now, he is saying that he was misunderstood. I heard him clearly enough to know better. It is nice for him to admit what some of us have known for years. He is an opportunistic liar and looks to jump ship like his neocon friends Perle and company. I sincerely hope this fraud suffers a great loss in listenership. As I told a "freeper" a long time ago "turn off the radio and read, instead of letting someone else do your thinking for you."

On the other hand, Hannity is still holding his ground. He's still (and always will be) clueless to what is going on in the reality based world.

Cap'n -- Somebody replaced the photo in my profile with the photo of Ann Coulter in her streetwalker costume; see the picture in the comment immediately below your first one.

You'll notice that I replaced the photo with another portrait shot of Yours Truly.

My suspicion that the cyber-vandalism was committed by an erstwhile colleague boils down to motive, means, and opportunity.

cool photo! and i'm glad to hear that you got something going. as for rush....maybe he'll be quiet now? and speaking of guns...that S&W 460 with the 5 inch barrel is super sexy! one gun store employee i know said a guy came in looking for bullets for the 460. he was looking for the hornady brand and asked,

"hey, do you guys got any of those lipstick bullets for the 460?" man, that was funny.

Limbaughtomized folk, myself included until 1996, about when he ended his TV show, ain't as common as they once were, thank the Good Lord!

Anyway, I'm glad to read about Judge Haggatha being deposed by the folk in her district. But she was so obviously unfit to hold her power position that even commoners with a monkey brain of clarity within would want to boot her. She just made it incredibly simple. Ergo, this act doesn't mean the commoners have any clear, consistent, and constitutional or moral message they're making apparent in the slightest, however. Again, if Kennedy acted like a fruitcake and was outright obnoxious, he'd have been thrown out eons ago. I mean, South Dakotans rejected the awful specter of womb murder being made illegal in their state. Same ol', same ol' Will. This election demonstrated only that the commoners still haven't a clue. Now, if this election had only about 5% turnout or were majority write-ins, perhaps, I'd say the folk may be grasping the big picture. But nah, they just wanted change for change's sake, not for a particular purpose to reverse direction entirely. But then, this was anything but unexpected in my mind ;).

And, Lawdy, I really hate being crude and incredibly insulting, but judging by that photo that woman's head looks like the living dead, like a skull with wax flesh pasted on and eyeballs inserted then caked with many layers of Hollyweird's finest assortment of cosmetics, hence the "Haggatha" reference. Yeah, yeah, I know looks ain't what counts, it's character, but when you're sorely lacking in both being cast off your perch is to be expected. Then again, I guess that particular photo could've been photoshopped, of course ;).

Darn, I missed the Coulter pic substitution before you corrected it. I bet that was mortifying ;D. You sure you didn't give someone your Blogger sign-on credentials??

Anyway, looking forward to your daily rants brother Will and I'll certainly let others know about your potential plans.

about the judges picture. right on. i thought she was somebody out of the addams family! i wonder what names the locals had for her?