Review of the News, November 30

"To us, everything is permitted." -- From a 1919 editorial in Krasni Mech (The Red Sword), a journal published by the Soviet Cheka, forerunners of the KGB. Unofficial motto of the contemporary Homeland Security State being constructed under the reign of the Bushling.

As far as the regime that rules us is concerned, Lebanese-born German citizen Khaled al-Masri is an un-person. He was treated as such during the six months he was illegally imprisoned in Macedonia and Afghanistan, and he's still regarded an un-person by the regime now that he seeks redress for his treatment.

Masri, who fled Lebanon for Germany in 1985, is the veteran of one failed marriage and many short-term jobs. For the past several years, he's been unemployed, living with his second wife and six children in a one-room apartment. In December 2003, seeking a brief respite from various domestic troubles, Masri took a bus trip to Macedonia. He was removed from the bus by Macedonian police and taken to a hotel in Skopje, where he was detained and interrogated for roughly a month.

On January 23, 2004, a group of masked Americans – a CIA-organized “snatch squad” well practiced in this sort of thing – dragged him off to an airplane bound for the “Salt Pit,” a detention and torture facility in Afghanistan.

"I felt two people violently grab my arms,” recounted Masri in testimony given yesterday to a House committee. “I then felt someone else grab my head with both hands so I was unable to move. . . . Finally they stripped me completely naked and threw me to the ground. . . . I felt a boot in the small of my back. I then felt a stick or some other hard object being forced in my anus. I realized I was being sodomized. Of all the acts these men perpetrated against me, this was the most degrading and shameful."

For five months, Masri was treated worse than most livestock. He was given fetid, greenish water; his typical meal consisted of “soup” that was an inedible slurry of leftover chicken parts from meals originally served to Afghan guards. He was kept in an unheated cell with one thin blanket as a barricade against the bitter cold of an Afghan winter.

On the second night of Masri's detention, recounts the book Torture Taxi, his masked captors dragged him from his cell in chains into another room, where he confronted seven other masked men. One of them, who spoke with a Lebanese accent, informed Masri that he was “in Afghanistan, where there are no laws ... we can do with you whatever we want.”

Within a very short time it was clear to Masri's captors that he was entirely innocent. Yet he was kept for five months before being dragged back to the Balkans and unceremoniously dumped on a hilltop in Albania.

Among the maxims followed by totalitarian rulers is this: Never explain, never apologize. Earlier this year a federal judge dismissed a lawsuit filed by Masri against former CIA director George Tenet (recipient of the Presidential Medal of Freedom). Federal Appeals Judge T.S. Ellis III allowed that Masri was entitled to some form of redress, he claimed that it would be injurious to national security for the lawsuit to proceed. (Remember that name; we'll return to him in a moment.)

The Bush regime has steadfastly refused to acknowledge it has wronged Masri in any way, it did offer an apology – to the German government, not to the individual German citizen who was wrongfully and illegally imprisoned, abused at length, and degraded in ways that normal people cannot even imagine.

The Atrocity in Atlanta, Continued

Details are emerging about the prelude to the State-authorized home invasion in which Atlanta resident Kathryn Johnston was murdered, and the whole thing is shaping up pretty much the way I had expected.

24-year-old Alexis Antonio White, the “reliable” informant cited in the affidavit used to procure a warrant for a "no-knock" raid, “is a petty criminal with a series of drug arrests in the past few years,” reports today's Atlanta Journal-Constitution.

“Records show he has been arrested at least once during that time on drug charges — last year, when he was charged with carrying 48 bags of marijuana. Police said he refused to stop his car for several blocks and his car reeked of pot....He has been convicted of at least one cocaine-related charge and served two years' probation, records show. A list of numerous arrests stretching back over the past seven years has him living at six different apartments. Atlanta police in a 2001 arrest report noted White's occupation as `drug dealer.' He was 19 at the time.”

Another key disclosure involves Atlanta narcotics officer Arthur B. Tesler., who was involved in the murder of Kathryn Johnston.

In May 2001 officer Tesler was involved in a head-on collision with Samuel T. Gulley, JR., who was riding a motorcycle. According to a lawsuit that was filed by Gulley in 2002 – and which resulted in a $450,000 settlement by the City of Atlanta – Gulley collided with Tesler's patrol car when the officer made an excessively wide turn while exiting a parking lot into the wrong lane.

As a result of the crash, Gulley spent three months in the hospital and was left with more than $90,000 in medical bills.

Gulley charged that Tesler and other officers “fabricated traffic charges against [him], ignored evidence ... and improperly initiated criminal proceedings” to cover up the officer's misconduct.

Notes the Journal-Constitution: “A police report written by Officer Jackson Christopher listed Tesler as the victim and suggested that Gulley ran into the officer's police cruiser. Tesler's account had him pursuing a fleeing suspect when he pulled out [into the wrong traffic lane]. But Tesler didn't alert radio dispatchers to the chase because of heavy radio traffic, according to court papers. The lawsuit contradicted Tesler's account by alleging that the officer was on routine patrol and didn't have his emergency lights or siren on at impact.”

Insisting that the settlement paid to Gulley isn't an admission of guilt, Atlanta Deputy City Attorney Jerry DeLoach told the Journal-Constitution: “Looking at all the facts and evidence, we thought it would be to the city's advantage and the employee's advantage if we minimized our exposure.”

Yes, it was vital to the best interests of the City – its ruling elite, that is, not its residents – to keep a valiant officer like Tesler on the payroll, so that he could eventually be involved in a home invasion that resulted in the murder of an 88-year-old grandmother.

About a decade ago, while a Senior Editor at The New American, I was contacted by a young Russian expatriate named Alexander Konanykhine, who had fled his country for the United States in 1992. At the time he was an adviser to Boris Yeltsin and president of a large and successful commercial bank in Russia that was coveted by the KGB-controlled Russian mob. 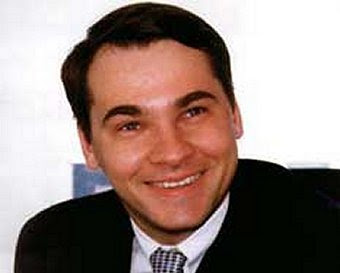 After being kidnapped by, and escaping from, the KGB, Konanykhine (along with his wife) came to the US and immediately contacted the FBI to warn that Russia's largest commercial bank – which was deeply involved in various ventures with the US government and various US corporations – was now in the hands of the KGB and the Russian Mob (or do I repeat myself). Three years later, while cooperating with the FBI, Konanykhine was warned by the Bureau that the KGB had taken out a contract on his life. Shortly thereafter, the FBI itself tried to extradite Konanykhine to Russia as part of a deal with the KGB.

Alex spent several years in legal limbo, often in jail, always living under the threat of being sent back to Russia and certain death. One one occasion he was literally about to be stuffed aboard a plane by US officials when a restraining order arrived. Eventually, Alex and his wife became the first people to be granted political asylum from “post-Soviet” Russia.

Given his background and experiences, Konanykhine's perspective on the recent murder of KGB/FSB defector Alexander Litvenenko by radioactive poisoning (which has been described, accurately, as a miniature nuclear attack), is eminently worthy of our attention. Alex sent me this link to two recent interviews, one on MSNBC and the other on CNN International, in which he briefly describes his own experience and comments on the Litvenenko case.

Incidentally, the Judge whose timely intervention saved Konanykhine's life was U.S. District Judge T.S. Ellis III – the same one who refused to allow Khaled al-Masri's lawsuit against the CIA to proceed.

During a hearing conducted in late 2003, Judge Ellis described Konanykhine's treatment as the result of a "sinister deal between the INS and the successors to the KGB. There's no treaty between Russia and the U.S., and they wanted this guy back for some reason, and the U.S. also wanted an FBI office in Moscow, and so they dealt. It was that simple.... This has all the earmarks of something strange. I don't understand what's happening with this man and Russia and our country."

One motive behind the effort to send Alex back to Russia was a $100,000 wrongful arrest suit he had filed against the Immigration and Naturalization Service (and, by extension, the Department of Homeland Security, which absorbed the INS). "The INS knew that I would be killed in Russia," Konanykhine told me in late 2003. "Certainly, eliminating the plaintiff is the most effective way to avoid a lawsuit. The question is -- shall the U.S. Government be allowed to kill people to avoid judicial review?"

Well, why not, if such is the sovereign will of the Almighty Decider? To him and his minions, "everything is permitted."
at 9:49 AM

I believe this applies(sadly):
Psa 94:20 Can wicked rulers be allied with you, those who frame injustice by statute?

you know, some folks simply do not think things through. that is to say, they do not consider the 2nd and 3rd order effects of their actions. i'm refering to repectful treatment of US service members if any are ever captured. on the back of a service member's ID card is a geneva code reference on how we are supposed to be treated--which level--according to the geneva conventions. well, our country's current actions pretty much makes us all fair game to torture. "you do it...so can we." and if we ever have another civil war, i strongly believe the govt would use the same techniques on the populace. i just wonder if those who support torture (you know, the same folks who have avoided past obligations, and have fun sending somebody else's loved one off to war) really believe that they control this monster that they've created? i think they have no idea about what they've really let out the box.