Review of the News, November 23

Offer Thanks to God, not to the State


As a Confederate sympathizer of (partially) Iberian heritage, I would prefer to celebrate Thanksgiving on April 30, the anniversary of the true first Dia de Gracias, celebrated by Spanish explorer Juan de Onate and his caravan in 1598.


There is nothing inappropriate about commemorating the tradition begun by the New England Puritans, or the earlier celebration conducted by Catholics in New Mexico, or both, since the point of each version is the same: A humble recognition of our intimate and comprehensive dependency on God for everything that makes life possible, and the adornments that make it a joy.

The problem with the standardized Thanksgiving celebration – as with so much else – is that it has its roots in a cynical wartime propaganda measure (introduced by an unbelieving president), and thus cannot escape the taint of State-worship. Be that as it may, I do intend to eat a scandalous amount of food later today, and thus will have to be brief in this morning's update (by way of pre-emptive penance I plan on doing several hundred pushups, skipping rope for about twenty minutes or so, and otherwise subjecting my aging and too abundant flesh to useful athletic trauma).

So let me see if I understand the story so far:

Undercover narcotics agents in Atlanta claim to have purchased an unspecified amount of illegal drugs from an unidentified man inside the home of 92-year-old Kathryn Johnston just hours before the paramilitary raid on the elderly lady's home that took her life, and left three of the tactical officers wounded.

Now the “John Doe” has fled, and authorities are refusing to release the “no-knock” warrant, despite the fact that it's a public document, because of what is described as an “office policy” -- which I'll wager was about ten seconds old at the time of its first invocation.

Color me cynical, but I'm guessing that we will eventually learn some or all of the following:

1)The warrant was defective;
2)The “evidence” behind it came from an unreliable source, such as a paid informant or a corrupt cop – or even the “John Doe” accused of making the buy, who cited a phony address as part of a deal;
3)As an alternative to the foregoing, “John Doe” doesn't exist, and the police will never find him, for the same reason O.J.'s diligent search has failed to find Nicole's “real killers,” and his fellow mass murderer George W. Bush has failed to find Saddam's “reconstituted” nuclear arsenal;

The most important thing we will learn will be details of a federal role in the killing – no, let's call it by its proper name: the murder – of Kathryn Johnston. 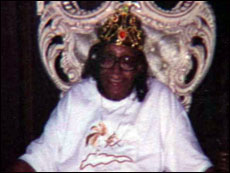 “By most accounts, the block where Johnston lived is quiet and unassuming. Yards are neat, and many of the residents are elderly. But, of the 15 homes on the block, three are either abandoned or empty and six [including the late Mrs. Johnston's] have burglar bars on windows and doors. And the Johnston home is just a block east of an area known as `The Bluff,' a section so beset with drugs and crime that federal authorities and Atlanta police have targeted it with an effort called Project Safe Neighborhoods. The program brings increased drug and gun enforcement, as well as inspections for code violations. Dozens of homes have been torn down since 2002 to prevent blight.”

The bullet-riddled mortal remains of Kathryn Johnston testify to the fact that few things are more lethal than a Federal initiative intended to enhance the “safety” of a residential neighborhood.

If the police were genuinely concerned about a drug deal at Mrs. Johnston's home, and they were convinced that the dealer was on the premises, why the hell didn't they simply stake out the home and wait?

Why was it necessary to deploy a paramilitary squad to kick down the door?

My best guess is that the department was reacting to the perverse incentives created by Federal counter-narcotics assistance. A military-style raid, after all, would underscore the magnitude of the “crisis” in Johnston's neighborhood, thereby keeping federal money flowing.

So this was, in a sense, a contract hit – if my suspicions are correct. The alternative – Katherine Johnston was killed because of a mixture of pathological incompetence and clinical indifference – is even worse.

Incidents of this sort are often attributed to a “Cowboy mentality” on the part of police tactical units, and rhetoric of that sort often invokes the iconic embodiment of the Cowboy Lawman mythos, Wyatt Earp. This is a gratuitous insult to cowboys of all varieties, of course, and a culpable misreading of Wyatt Earp's actual record.

Earp was not the dashboard saint played on the Silver Screen by Burt Lancaster, or on the small screen by Hugh O'Brian; he was probably a horse thief in Missouri before becoming a constable in Kansas. After ending his brief career in law enforcement, Earp frequently found himself drawn into small-time scams of various kinds. And we shouldn't ignore the fact that during his tenure in Tombstone, Earp was a Fed, with all the unfortunate connotations that go with that status.

But unlike today's opportunistic paramilitary police operators, Earp – the Shootout behind the OK Corral notwithstanding – resorted to gunplay with commendable reluctance. On most occasions he out-thought and out-maneuvered the bad guy, and his preferred method of dealing with an armed suspect was to “Buffalo” him – approach him from the blind side, grab his gun hand, and stun the subject by clubbing him with the butt of his revolver. (This tactic was depicted very well in the Kevin Costner bio-pic Wyatt Earp, even though the much-maligned Tombstone offers a sounder depiction of the Marshal's life – Val Kilmer's odd choice to play Doc Holliday with a Foghorn Leghorn accent notwithstanding.)

In his witty and compulsively readable book Inventing Wyatt Earp: His Life and Many Legends, Allen Barra quotes the following observation by Bat Masterson, who was Earp's comrade in the legendary Dodge City Peace Commission: “[Wyatt], never at any time in his career, resorted to the pistol excepting in such cases where such a course was absolutely necessary. Wyatt could scrap with his fists, and had often taken all the fight out of bad men, as they were called, with no other weapons than those provided by Nature.”

Too often, Wyatt's confrontations (including the famous shoot-out in Tombstone) grew out of efforts to enforce civilian disarmament (aka “gun control”) ordinances. And there are other aspects of his personality, career, and legacy about which I'm ambivalent.

For now, suffice it to say that if the “Cowboy mentality” Wyatt Earp embodied were widespread, we wouldn't be seeing so many innocent people die in needless paramilitary police raids.
at 9:26 AM

I also note that the police were quick to report that 'certain suspicious substances were seized for testing'. What utter, unequivocal offal. Had there actually been bags of dope on hand they would have immediately crowed about how much they had seized in a desperate attempt to deflect us away from the fact that these murderers gunned down, by anyone's definition, a Sweet Little Old Lady. Want to bet the 'suspicious substances' were her spice rack and bag of frozen parsley in the freezer?

naw, but i would bet you that if any things was found, it may have been placed.

While we're onto the topic of the Old West, I'd like to add that as a prospector out in the lawless territory of the internet, I always find my gold at Pro Libertate, always a sure-fire when you tire of that gold-plated BS on the Federale Circuit.

Are you hiring Sir?
I have just about hung up my old hat since it can't keep out the bull. Why wear rain gear when you're in the river of lies?

I'm on the lookout for a worthy teacher and you're on the short list. All my compliments and thanks for the great website. You bring respectability to the internet.