Resurrection Sunday: A Memo to the Loser 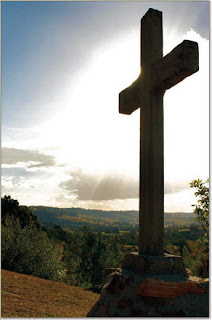 In fact, you lost a long time ago.

You've never gotten it, have you? Since before time began – I'm not exaggerating one bit – you've been the poster child for Not Thinking Things Through. In your arrogant ambition you actually thought it was possible to put yourself in charge. The real tragedy is that so many people have fallen for you scam, and continue to do so.

You're weak, predictable, contemptible – and so are we when our mistakes and crimes give you a transient sense of satisfaction.

All of us have done so, and often. All except One.

The One who beat you.

I've often wondered if you knew how He would beat you – not through power, but through love and self-sacrifice, by appearing to give you the triumph that you have always craved.

You knew He couldn't be bribed, even when you offered to Him the one thing that is actually yours: The kingdoms of this world (as distinct from the earth itself, which is his and always will belong to Him).

You made use of a few who couldn't resist much smaller temptations of that kind – politicians, who are always willing to sell their souls in a buyer's market – to put Him through a burlesque of an examination and trial. “Coercive interrogation” methods representing the state of that sadistic art were applied – not to learn the truth, as no torturer is ever interested in learning it, but rather because torture always gives you pleasure.

Did you really believe, as He took the final pain-drenched steps to His death, that you could actually take His Life?

I earnestly hope that you did – because this would make your disappointment and humiliation that much more acute.

His Life was never yours to take. He gave it freely, and then took it up again.

And that's why you can't even claim credit – if that is the appropriate word – for His death, or even for putting Him on the cross.

I grant that you've had some success in convincing altogether too many people that one discrete group of us “killed” Him. Not only does this delusion engender hatred – which is the very food on which you feed – but it prevents those who succumb to it from confronting the reality of our nature, and facing the grim reckoning each of us must make for our individual responsibility in His death.

You didn't kill Him, because you couldn't. You didn't even put Him on the cross.

At the moment the One who beat you surrendered His Life, the reality of your miscalculation should have been obvious, but then – in light of your arrogance and foolishness -- I'm probably giving you too much credit. In any case, when He arose three days later, the truth should have been plain even to you.

You lose. All that's left for you is to propagate death, terror, sin, and misery until we're ultimately rid of you. May God hasten that day.

As the headlines never fail to illustrate, you're still firmly in control of the kingdoms of this world. Their wars – both against each other, and against the hapless individuals they rule – provide you with whatever passes for pleasure in the miserable realm you inhabit.

Sure, there's perverse delight to be found whenever you seduce an individual into sin, but the wholesale corruption, violence, and destruction wrought through the State is still your biggest source of satisfaction. 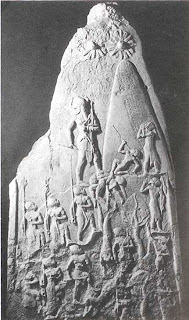 The worship of collective human power: This ancient stele is believed to depict Nimrod, founder of the Babylonian state and creator of the Tower of Babel.


You have earned some apparently unlikely allies among some of us who have professed to know the One who has beaten you; people of that sort don't understand that by expanding the power of the State, they are making human beings more dependent on you – and more vulnerable to you. If Josephus is correct, this is a trick as old as Nimrod. Like I said, you're not creative – but unfortunately, we're pretty gullible.

The ancient tower of Babel...

...and its modern equivalent.

But this doesn't change the fact that you've lost. Until the long-sought day that defeat is consummated, those of us who understand how things really are should concentrate on making life as miserable as possible for you.


You know anguish and rage every time someone turns his life over to the One who beat you. Each act of charity inflicts real pain on you. Peace and freedom are loathsome and unbearable to you. Where you thrive on hatred, forgiveness causes your influence to wither -- something that I should remind myself, since I'm as dependent on the forgiveness of others as I am reluctant to grant forgiveness where it's required of me.


None of us could beat you, nor could all of us do so together (in fact, that last notion is one of your most cunning and destructive lies). But the One who made us did, and for reasons I can't understand, He's letting us share in the victory. Which is what the shouting is all about today.


Everybody -- except The Loser, of course -- is invited to visit The Right Source for news, commentary, our e-magazine, talk radio, podcasts, and discussion boards.

Amen, Brother Grigg. I'm very thrilled that you have found the Lord Jesus Christ, or I should say He found you (and me, and the rest of the saints). All of us, who are His children, can rest in the knowledge that He paid the penalty for our sins - past, present, and future - by His death on the Cross and that He is risen!

In fact, the core of Christianity and absolute assurance we have in Him is the reality of His resurrection, without which the central core message of Christianity would be vain and hopeless.

Heb 12:2 looking to Jesus, the founder and perfecter of our faith, who for the joy that was set before him endured the cross, despising the shame, and is seated at the right hand of the throne of God.
Thank you Immanuel, for what we can not do, pay the price for our sins.
Amen

He is Risen Indeed!

Wayne... one of mine, if not THE favorite verse. For the JOY set before him... There in a nutshell is the reason why He endured it all. He saw beyond the suffering and pain, beyond the temporal and into the ageless expanse of eternity, where an innumerable host, saved through His sacrifice, are gathered together. Oh the Joy!

This seemed appropriate (and the coincidence of the index-finger position is interesting).