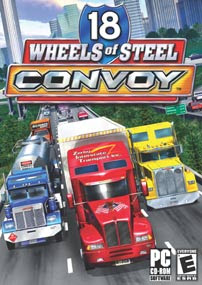 Anybody old enough to have lived through the 70s, and who avoided the vices that would make remembering that decade difficult, can probably recall the 1975 populist anthem “Convoy” (and perhaps even the 1978 Kris Kristofferson/Ali McGraw film of the same title).

The C.W. McCall ballad described the spontaneous rebellion of long-haul truckers against the national 55 mile-per-hour speed limit. Determined to cross the continental United States without stopping, the truckers collaborated via Citizens Band Radio to warn each other about speed traps and other snares laid by the “Smokies” -- State Police and other revenue-hungry lawmen. 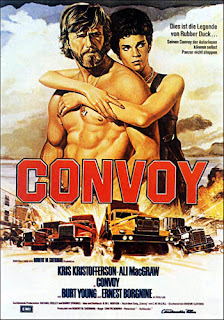 It is an illustration of the perversity of our times that at least some truck drivers are now collaborating with the revenue farmers.

“Some semi-trucks in Kansas are carrying something new – a highway patrol trooper,” reports the Topeka Capital-Journal (free reg. req.) “Troopers are riding in the cab with professional truck drivers as part of the new Trucks on Patrol for Safety [TOPS] program in which troopers witness and report violations of the law by police radio to other troopers on patrol in the area who can stop the vehicle involved...."

The program, modeled after a pilot program in Washington State, will run for six weeks and is expected to harvest hundreds of thousands of dollars in revenue. Each truck will be fitted with a five-camera system intended to record purported violations. The trucking companies who have decided to “partner” in this effort donate the vehicles and drivers free of charge, no doubt in consideration of certain non-monetary political or regulatory favors to be named later (and behind the scenes).

The first of the corporate Quislings to offer such services was the appropriately named Yellow Transportation of Wichita.

Sniff, sniff -- do we discern the rancid odor of federal pork emanating from this initiative?

Indeed we do: It is funded through the Transportation Department's Federal Motor Carrier Safety Administration, by way of taxes collected at the gas pump.

It is not widely understood that federal “highway safety” bills have been larded with millions of dollars for schemes like TOPS – putative public safety campaigns that actually have the dual purpose of knitting “local” and “state” police to their federal masters, and giving those affiliates of the national Homeland Security State a taste for the easy money to be made through highway robbery.

The August 2005 (take a deep breath) "Safe, Accountable, Flexible, Efficient Transportation Equity Act: A Legacy for Users" law, for example, contained huge caches of federal cash for promoting sobriety checkpoints and roadblocks and for impounding or confiscating vehicles as countermeasures to alcohol-impaired driving. As the watchdogs over at TheNewspaper.com observe, this approach “allows states to fund driving under the influence (DUI)-related confiscation efforts entirely with federal dollars."

The vigilant and principled Karen DeCoster points out another way the Feds have used our gas taxes to build their highway surveillance network.

A June 2005 seat belt use survey was conducted in New Mexico by the Preusser Research Group, under a contract from the National Highway Traffic Safety Administration. “Previous studies found lower nighttime seat belt use rates in Connecticut, New York and Pennsylvania,” reported the NHTSA.(.pdf) “This study sought to confirm those findings, using military-grade night-vision technology to collect nighttime belt use data, measuring day and night belt use in both densely and sparsely populated locations throughout New Mexico. AutoGated brand night vision goggles (XR5 image-enhancing tube) were used in tandem with an infrared spotlight to provide adequate illumination of the vehicle occupants without affecting the occupants of the
vehicle....”

According to the AP, as of June 2005, some 13,000 police agencies nationwide were using military-issue night vision goggles to catch seat belt "violators." (No government has the right or constitutional authority to compel drivers or passengers to buckle up.)


This militarization of traffic enforcement – the use of battlefield hardware and surveillance tactics – is carried out in the name of public safety, natch. Would anybody care to bet that it will also be used to identify vehicles suspected of involvement in drug trafficking, as well?

I use that formulation for a specific reason: In the “war on drugs,” it is often the property of a suspect – his car, cash, or other assets – that is found “guilty” and seized by the police. This is called enforcement in rem (“against the thing”), and the process is called “asset forfeiture.”

Here's how this could work:

A late-model SUV with out-of-state license plates is spotted passing a semi-truck on a stretch of I-80 in Dallas County, Iowa. The driver of that vehicle did nothing improper, and gave no indication that he was intoxicated – but the State Trooper in the semi noted that he fit the “profile” of a suspected drug courier. Accordingly, he radios ahead to the Dallas County Sheriff's Department, which intercepts the SUV.

After the officer cites some manufactured rationale for the stop (they can always “find a reason”), the driver is bullied into a “consent search” of the vehicle that finds no narcotics but does uncover a substantial quantity of cash – say, tens of thousands of dollars. The car is impounded, as is the cash.

The driver insists that he's not a drug dealer, but he's not in a position to fight the charge. He is presented with a waiver permitting the Sheriff's Department to declare that the vehicle is “abandoned property”; without much recourse, the driver signs the document. A legal notice is published in the paper inviting people to claim the “abandoned” automobile; if nobody does so within a month, the Department claims the vehicle and can sell it at auction. 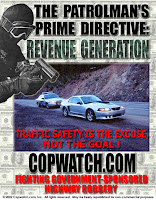 I grant that this sounds entirely implausible. And yet between 2002 and 2006, Iowa's Dallas County Sheriff's Department hauled in $1.75 million in cash and vehicles, most of it seized from black and Latino drivers, using the method described above – except for the innovative use of semi trucks as mobile spotter platforms for this scam.

According to the Des Moines Register, the Dallas County Sheriff's Department, along with the Iowa State Patrol and eight local police departments, “have taken in $2.4 million in cash and property from accused criminals in Dallas County [since 2002]. Nearly 90 percent came from a 24-mile stretch of I-80." The figure might be higher, since the details of various seizures don't become public until after court proceedings are finished. 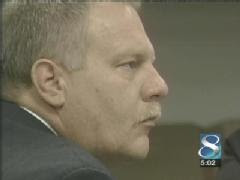 Last week, former Dallas County Sheriff Brian Gilbert was found guilty of stealing a duffel bag containing $120,000 in cash “forfeited” from motorists detained at traffic stops. Gilbert declined to testify in his own defense, and the jury took just six hours to convict him. Gilbert's theft was relatively petty, given the federally abetted grand larceny routinely committed along that stretch of I-80.

This is exactly the kind of localized police revenue trap (albeit one created with federal assistance) the fictional truckers immortalized in “Convoy” would have sabotaged. And Gilbert is precisely the kind of wretchedly corrupt lawman one finds enshrined in trucker mythology.

Be sure to drop by The Right Source for news and commentary!

This same sort of creative theft was documented on some TV show years ago. In that case it was somewhere in Louisiana along the interstate. Seems the friendly fuzz, who were evidently quite notorious, would claim that the drivers were making "improper lane changes" or some other rot gut excuse to impound peoples vehicles just like these clowns.

BTW... Will, whats up with Blogger and all the nonsense with passwords etc. not working etc. I'm forced to use anonymous.

"Anonymous" -- I'm sorry about the glitches with Blogger. I noticed some problems last night when I was composing this morning's entry. I'll see what I can do to get this straightened out.

Will, I don't mean to post O/T, but I guess you've heard of the massacre at VPISU (Virginia Tech) in Blacksburg today. 33 dead.

And amazingly (or not), the General Assy killed House Bill 1572 that would of given students and faculty the ability to be armed on campuses.

As the Roanoke Times reports:

The bill was proposed by Del. Todd Gilbert, R-Shenandoah County, on behalf of the Virginia Citizens Defense League. Gilbert was unavailable Monday and spokesman Gary Frink would not comment on the bill's defeat other than to say the issue was dead for this General Assembly session.

Virginia Tech spokesman Larry Hincker was happy to hear the bill was defeated. "I'm sure the university community is appreciative of the General Assembly's actions because this will help parents, students, faculty and visitors feel safe on our campus."

Naturally, the timing of this tragedy couldn't have been more "precise" for nixing the bill that would no doubt improve the safety of campus faculties and student bodies all over Virginia by allowing firearms possession on campus. Mr. Hincker is obviously brain dead and thrilled by the bill's defeat.

In any event, build up your private cache accordingly before the BAN fests begin in earnest. After all, the gun grabbers now have new impetus stemming from this tragic event to go on the offensive.

[Back to your regular blogcast]

Correction: The HB 1572 was defeated in committee in January 2006. My bad, I was thinking this past January as I remember reading about the bill, but my timing was out of whack and it obviously took place much earlier, yet I remembered it like yesterday and dug up the Roanoke Times article about it. I do usually keep up with issues the VCDL is involved in, like HB 1572, hence the quick article recall.

I was just in such a hurry to post about it that I didn't pause long enough to think about the timeline in question. Ergo, I apologize for implying this was a recent bill defeat, Will, and everyone who reads the comments.

Still, that said, the points are not invalidated, especially about expecting gun grabbers to be re-energized and to build up your cache before the inevitable BAN bills are enacted.

And I'm really curious if Mr. Larry Hincker, the university administrators, students, and parents really NOW feel SAFER as Hincker briskly stated back in January 2006 they would be after HB 1572's defeat?

But then, the commoners have short attention spans and that bill defeat had long been forgotten by the poor souls and probably by Mr. Hincker as well.