The Prosecutor as Jihadist: Andrew Thomas vs. Justice 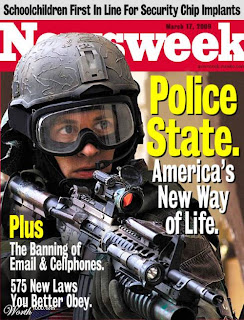 Margaret Vitale is a 57-year-old nurse who lives with her daughter Tina in Glendale, Arizona. A while ago, Tina decided to move out, and – concerned for her mother's safety – she urged Margaret to purchase a handgun.

After Margaret tried many different handguns and found them to be unsuitable, her son John suggested that a revolver would be a good choice, and he brought an unloaded one to her apartment. With Tina and John looking on, Margaret dry-fired the revolver several times to see if its action agreed with her. When she had satisfied her concerns, Margaret put the weapon aside and had a brief conversation with Tina.

Inexplicably, John took this opportunity to load the revolver – without telling Margaret that he had done so. This was a potentially lethal violation of rudimentary gun safety protocols. Thankfully, on this occasion the worst didn't happen when – a minute later – Margaret picked up the revolver, pointed it down at a neutral location, and pulled the trigger.

The round Margaret discharged hit an appliance; the ricochet sent it through the fleshy part of Tina's calf, leaving a small but clean exit wound.

As a 20-year veteran nurse, Margaret wanted to take Tina to the hospital, and she knew that the gunshot wound would be reported to the police. So after making sure that her daughter was all right, she called 911. When the policeman arrived, he took statements from Tina (the “victim”), Margaret and John. Satisfied that no crime had been committed, the policeman left without confiscating the firearm. He did, however, write a report, which – at the insistence of the officer's supervisor -- was sent to the County Attorney's office.

That report offered an accurate and detailed account of the accident that took place in Margaret's apartment. No reasonable human being could misunderstand what happened on that occasion, or consider it a crime – particularly in light of the fact that the “victim” wasn't pressing charges, and had told the officer that her immediate concern was for the supposed offender, who suffers from high blood pressure.

Unfortunately, the Maricopa County Attorney's office is headed by the execrable Andrew Peyton Thomas, who is among the most zealous practitioners of the Republican Party's proprietary brand of paternalistic totalitarianism. Like the Grand and Glorious Decider who leads the GOP, Thomas is determined to rip up “evil” by the roots. Unlike Bush, however, Thomas has been brutally candid about what this would mean.

“The root of our crime problem,” wrote Thomas about a decade ago, “is a rights-happy radical individualism.” The solution to crime, therefore, would be to destroy individual rights – and to the extent he has been given power to do so, Thomas has made remarkable progress in that direction. His most effective weapon in the war against individualism has been to overcharge criminal defendants and use the threat of mandatory sentences to extort draconian plea bargains.

“They're overcharging for felonies that should be misdemeanors,” observes Tempe defense attorney David Cantor of Thomas's office. “Then [defendants] plead to the lead charge, but their lead charge is too stiff. This means everything goes to trial” -- unless defendants simply give up and take a deal.

This approach has been politically profitable for Thomas and his clique, and financially lucrative for defense attorneys. It has been a disaster for individual rights, of course – but then again, Thomas insists that individual rights are the enemy of the orderly society he seeks to create.

Thus when the Maricopa County Attorney's office was informed of the incident involving Margaret and Tina Vitale, it filed -- “per policy,” as one of Thomas's drones insisted – a charge of “dangerous disorderly conduct” against the 57-year-old nurse, who had done nothing wrong. This charge is a felony that would involve a mandatory prison term.

The only option offered by Thomas's office – once again, “per policy” -- was for Margaret to plead to a “designated felony” that would involve probation and a time in the County Jail system, which is operated by the squalid, senile publicity whore Joe Arpaio. Since it's not uncommon for non-violent offenders to die in Arpaio's jails, Margaret might be safer in state prison.

No crime was committed here. Margaret and Tina were involved in a bizarre accident that, thankfully, involved nothing more than a trivial flesh wound – until the State became involved.

Recounting this episode with Margaret and Tina on the Charles Goyette radio program (listen here), defense attorney Marc Victor pointed out that “Not every wrong needs to be a crime.” This is obvious for those of us who understand and cherish individual rights. Andrew Thomas, once again, is not found in that number.

Thomas's totalitarian impulses were displayed to good effect just three days ago (April 3) when his office filed terrorism charges against a 14-year-old middle school student from Mesa who allegedly pulled a knife on a female class. After being threatened, the girl ran home and called the police. When the alleged assailant didn't show up at school the next morning, the police visited his home, reportedly finding a backpack containing a handgun, chains, and a rope.

The police recommended that the youth be tried as an adult on charges of kidnapping (attempted kidnapping would be a more plausible charge, given that the girl wasn't actually abducted) and aggravated assault with a deadly weapon. Surely this would be sufficient to address this outrage against the person and individual rights of the traumatized young girl.

But remember – individual rights are the problem, from Thomas's perspective. Order is all that matters. And under Section 802 of the PATRIOT [sic] Act, any act of kidnapping can be defined as a form of domestic terrorism. All that was necessary to do so in this case was utter shamelessness and degenerate ambition. Andrew Thomas was up to that challenge.

Thomas is obviously a depraved fanatic. But he's also something of a pioneer: He has created what could be a self-perpetuating lawyers' cartel in Maricopa County.

“Business for Valley defense attorneys is booming,” reported the February 18 East Valley Tribune. “Maricopa County Attorney Andrew Thomas has been cracking down on criminals since 2004, and public defenders have scrambled to keep up as prison populations have swelled.” As Phoenix criminal defense attorney Larry Debus points out: “We charge 50 percent higher fees because we have to go to trial, and trials are expensive.... I say he's a great county attorney. We charge higher fees and we go to trial more, which is what we do best.”

Marc Victor, who is representing Margaret Vitale, offers a much different view: “Andrew Thomas has been good for business, but bad for justice.” Noting that he can charge $15,000 for the same services for which his brother, a defense attorney in Massachusetts, can charge $2,500, Victor declares: “I would prefer to make less money and have more justice.”

But for Thomas, justice – the effort to vindicate individual rights – isn't the point; the point, rather, is to expand the power of the State and to uphold the interests of the political class. This is demonstrated not only by his perverse, sadistic insistence on overcharging petty criminals or – as with Margaret Vitale – manufacturing “crimes” where none exist, but also by one case in which his zeal for prosecution mysteriously evaporated.

In mid-March, Thomas announced that he was discontinuing the prosecution of the “Glendale Four,” three City Council members and a county clerk accused of felonious misconduct by falsifying some public records and destroying others in order to conceal suspected financial misconduct.

This was an authentic crime against public order of the kind only government officials can commit. Which is precisely why Thomas had no interest in the case. He is indecently eager to send innocent 57-year-old nurses to prison, and to threaten concupiscent teenage boys with life in prison for the purported crime of looking at dirty pictures. But criminals who misuse the power of the State? Well, here the totalitarian Thomas would agree with the constitutionalist Marc Victor: "Not every wrong needs to be a crime."

If Mr. Thomas were to allow the prosecution of public servants, where would the "witch hunt" end?

...NOT at his doorstep, one would hope...but why temp justice?

The attorney who made the statement that Andrew Thomas is a great prosecutor because he creates more business for defense attorneys is disgrace to the profession. I'm embarrassed.

I'd like to call Tempe and give this prosecutor a piece of my mind. He's going to ruin this woman's life. It's highly likely that the Arizona Nursing Board will pursue her license and destroy her livlihood even when she is acquitted.

If you skip the words in this blog and just look at the pictures you can guess who the bad guy is. He is the guy with all the gold fringe behind him! :)

I showed your blog to a journalism professor of mine and asked if this was journalism. He said no, not really.

I've never gotten a concrete set of criteria from any journalism prof for what "is" and "is not" journalism. By my definition, however, this is. You are very inspiring.

I suspect that your journalism professor is illiterate. Request a refund, at once!

The faux magazine cover is a hoot! But if you were to go back forty or more years and check out the covers back then you'd laugh at how quaint it was. It seems that the saying, "What one generation tolerates the next embraces.", is oh so true.

As far as what the journo-prof deems as "true" journalism its time he got with the program and realize that web readers actually read MORE than their print counterparts. For those types of folks its all relative anyway. If you're writing what "matters" to them then its substantive otherwise into the mental round file.