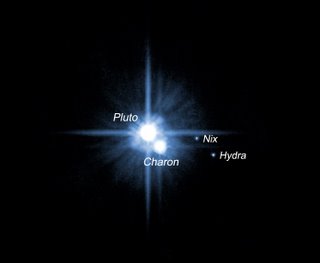 Commentators not otherwise noted for interest in celestial matters, or for devotion to long-established conventions, are performing cadenzas of alarm over the prospect of expanding the Solar System's roster of planets to an even dozen ... so far.

[UPDATE -- Here's a piece from the New York Times yesterday that gives a rundown on the upcoming IAU vote on the definition of "planet."]

For years, since the discovery of the Kuiper Belt -- a distant collection of frozen objects occupying the hintermost known portions of the Solar System -- some retromingent people have been lobbying to reclassify Pluto as a "Kuiper Belt Object" (KPO) rather than a planet. Pluto has a wildly eccentric orbit, titled radically out of the plane of the ecliptic, that brings it within the orbit of Neptune; it is smaller than any of the nine classic planets, and also several moons as well (including Luna); its major satellite, Charon, is nearly as large (two other miniscule Plutonian satellites were recently discovered, Nix and Hydra).

What this tells me is that Pluto is a strange little world. It is spherical and, despite being tiny, apparently has a very weak methane atmosphere, which means it's not an asteroid (although it conceivably could be a VERY large comet, if something -- say, a relatively near pass by a massive object, such as a neutron star, were to budge it sun-ward). It essays an independent orbit around the sun, which means it's not a moon. It has a small seraglio of moons.

It's a planet, albeit a weird one. Deal with it.

Ah, but astronomers have recently discovered several other KPOs, two of which -- Sedna and Quoaor -- are of comparable size to Pluto; the other, 2003 UB313, nickamed "Xena," is larger (and comes equipped with its own satellite, nicknamed Gabrielle, which demonstrates that professional astronomers can be fan-boys, too). Like Pluto, Xena follows a bizarre trajectory that brings it nearly as close to the sun as Neptune.

Advocates of demoting Pluto insist that Xena's discovery strengthens their case by making Pluto less distinctive. I believe the opposite is the case: Xena demonstrates that Pluto is a representative of what could be a large cohort of rocky trans-Neptunian planets awaiting discovery.

"But this would be awful," keen Pluto's detractors. "There might be scores of things out in the Kuiper Belt that could qualify as planets!"

The International Astronomical Union, seeking to palliate everybody and succeeding in doing exactly the opposite, has suggested a new standard for Planet-hood that would include Pluto and Xena, as well as Ceres, the largest and most spherical of the "minor planets" (also known as asteroids) between Mars and Jupiter. But it would also include Charon, Pluto's satellite, since the barycenter of Charon's orbit is outside Pluto's planetary mass. This would mean that Pluto and Charon are part of a double-planet system.(Oddly enough, there's a similar relationship between the Sun and Jupiter as well.)

Oh, but this would ruin the settled symmetry of the Solar System as most of us learned it. It would mean revising textbooks. The prospect of additional discoveries would mean we might never have closure!

I grant that this is a controversy over classification, rather than a reactionary refusal to accept new knowledge. But it seems to me that a lot of the negative reaction to the IAU's proposed definition is inspired by a reflexive aversion to admitting that the model of the Solar System that's been taught for decades has been woefully inadequate.

But it's not as if Xena just materialized out in trans-Neptunian space for the mischievous purpose of making all of our Astronomy textbooks obsolete.

As I've mentioned elsewhere, I'm an incorrigible sci-fi geek. This explains, but by no means does it justify, my affection for a really bad mid-1970s British series called "Space:1999," which chronicled the adventures of a small band of scientists stranded on the moon after a massive atomic explosion hurled it from earth orbit. As that premise illustrates, this was science-optional sci-fi. Be that as it may...

The illustration above is a shot of the planet "Meta," as depicted in the pilot episode of "Space:1999." Its discovery in the distant depths of the Solar System was the cause of some controversy. It apparently wandered close enough to be caught by the Sun's gravity. 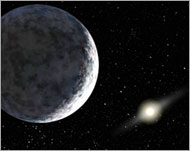 -- is an Artist's conception of Xena, the newly discovered trans-Plutonian planet, that just wandered close enough to be detected by ground-based telescopes. Its discovery in the distant depths of the Solar System has been the cause of some controversy. And the artist who created that depiction seems to have been a fan of "Space:1999," too.

There's no real point to this, of course, beyond reflecting on the majesty and mystery of the universe God created for us, and expressing frustration over the petty politics of those who seem more concerned about keeping tidy lists than celebrating the wonders of creation.
at 4:19 PM

Finally Mr. Grigg, something I do not agree with you whole heartedly on. Although I do agree with you that it is simply amazing that we are finding more objects in the Kuiper belt, I think that there has to be certain qualifications for what constitutes planethood. Just because I don't believe Pluto should be considered a planet doesn't mean I can't marvel at its celestial splendor, however. On another note, one that affects you much greater than myself, have you ever heard of the supervolcano underneath Yellowstone National Park?