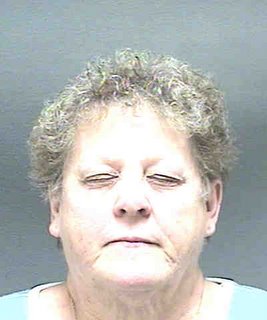 Ladies and gentlemen, behold the face of the internal enemy from whom the heroic Feds are gallantly protecting us.

69-year-old Janet Gregory, during a flight from Cleveland, committed the supposed crime of cleaning and polishing her nails en route to Charlotte, North Carolina last Friday. How she had managed to smuggle the contraband onto the plane is unclear, but what is known is that this elderly lady, assuming that she lived in a free country, simply refused to turn over her private property when instructed to do so during the flight.

Somehow, the plane managed to reach its destination safely in spite of Mrs. Gregory's rebellion.

On arriving at the airport, the matronly rebel was surrounded by the "authorities" -- the catc-all title used to describe the tax-fattened parasites who stare at us with "cold, dead alien eyes" and exploit any opportunity to make our lives miserable -- and arrested. She was arrested and dragged away, kicking and screaming, thereby giving agents of the regime the pretext to charge her with "real" crimes: Kicking a TSA agent (which should be considered a moral and civic duty, not a crime), resisting arrest, and "communicating threats."

And by way of illustrating the point I made previously about the fact that we no longer have independent state and local law enforcement bodies in the USSA, the Mecklenburg County Sheriff's Department dutifully imprisoned Mrs. Gregory and posted her photo on its website, as if it were a prize trophy of some kind.

At 9-11+Five Years, Osama bin Laden remains at large, but the public can sleep soundly knowing that JANET GREGORY is behind bars.

This isn't the first time that the TSA -- a squalid assortment of thieves and perverts, seasoned lightly with a handful of decent but misguided careerists -- has brought the hammer down on an outraged grandmother.

Almost exactly two years ago, 62-year-old Appleton, Wisconsin resident Phyllis Dintenfass and her husband were passing through security prior to a flight at Appleton's Outagamie County Regional Airport. Something Mrs. Dintenfass was wearing repeatedly triggered metal detectors, and the retired schoolteacher was taken to a "secondary screening area" by a TSA supervisor named Anita Gostisha. Mrs. Dintenfass put up no resistance as Gostisha used an electronic "wand" to scan for metal objects.

But Dintenfass -- as would any woman with so much as a scintilla of self-respect -- rebelled when Gostisha used the back of her hands to check the area beneath Dintenfass's breasts. According to Dintenfass, her reaction was to mimic the unwanted and uninvited physical contact while exclaiming, "How would you like it if I did that to you?"

In her account of the incident, Gostisha claims that the middle-aged woman -- who was described by those who knew her as harmless and not given to violence of any kind -- "slammed her against the wall," which would be an entirely appropriate reaction to what reasonable people would consider a sexual assault. Dintenfass flatly denies shoving the TSA official, and since her accuser works for the regime, we can assume that she's a liar.

But since Dintenfass's accuser wears the costume and bears the insignia of the criminals who rule us, her person is sanctified, and severe punishment must be meted out against mere commoners who defile it through unauthorized contact.

Dintenfass was arrested and charged with "assaulting" a federal official. A federal jury found her guilty of that supposed crime on July 26. She was eventually sentenced to a year of probation and 100 hours of "community service."

Here's a picture of the "assailant," whose hobbies -- when she isn't leaving helpless agents of the Leviathan palsied with terror, that is -- include making beaded jewelry.

Note well that the charges against Dintenfass constitute an official acknowledgment from federal attorneys that the invasive, degrading physical contact regularly inflicted on air travelers by the TSA's airport molesters is a form of "punishment" and "assault."

In his book The Tyranny of Good Intentions, Paul Craig Roberts points out that under the regime now ruling us there are two classes of people: Those whom the law does not restrain -- the political class and those who serve it -- and those whom the law does not protect -- the hoi polloi, of whom Mrs. Gregory and Mrs. Dintenfass are perfect examples.

These cases also illustrate the unforunate truth of the oft-repeated maxim that because of the supposedly ubiquitous threat of terrorism, "We're all Israelis now."

In fact, the ever-escalating war against the personal dignity of air travelers suggests a refinement to that formula: The Feds are Israelis, the rest of us are Palestinians.

Referring once again to Richard Ben Cramer's valuable book How Israel Lost, I share the author's description of the quotidian indignities visited on Palestinians at security checkpoints.

"I know of one school headmaster, a dignified older man, who passed the same checkpoint every morning, and was made to undress -- not once but often -- and stand naked while his students passed by," writes Cramer. "This was richly humorous -- that old man was (formerly) so conscious of the honor of his position."

"The simple rule is, there are no rules -- or no rules that were the same rules yesterday," continues Cramer in describing the security restrictions on those living under Israeli occupation. "The function of the checkpoints is to show who's boss."

He goes on to describe how he asked an Israeli soldier newly arrived from Russia -- who, like most such immigrants, is almost certainly not Jewish -- why it was considered important to stop people who obviously were neither criminals nor potential terrorists.

The shtarker replied: "Because the bad attitude -- you know? If they are acting like they are good, and we are the bad one. Then, you must show them control."

That's the whole point of checkpoints, whether established at the entrance to Gaza or at airports in Charlotte, North Carolina and Appleton, Wisconsin. The State simply has to teach the rest of us who's in control.

In its treatment of Janet Gregory and Phyllis Dintenfass, the regime under which we love displays its true nature. And the stolid, ignorant indifference of the public to such outrages is equally revealing. Solzhenitsyn would be disgusted by us, albeit not surprised:

"And how we burned in the camps later, thinking: What would things have been like if every Security operative, when he went out at night to make an arrest, had been uncertain whether he would return alive and had to say good-bye to his family? Or if, during periods of mass arrests, as for example in Leningrad, when they arrested a quarter of the entire city, people had not simply sat there in their lairs, paling with terror at every bang of the downstairs door and at every step on the staircase, but had understood they had nothing left to lose and had boldly set up in the downstairs hall an ambush of half a dozen people with axes, hammers, pokers, or whatever else was at hand?... The Organs would very quickly have suffered a shortage of officers and transport and, notwithstanding all of Stalin's thirst, the cursed machine would have ground to a halt! If...if...We didn't love freedom enough. And even more—we had no awareness of the real situation.... We purely and simply deserved everything that happened afterward.”

True, we're not living under a full-blown American Cheka yet. But if we don't love freedom enough to rebel at the treatment of frail, elderly women like Janet Gregory, we don't deserve what etoliated freedoms we still exercise, and will richly deserve everything that's coming to us.
at 5:51 AM

So True, So True
Thank you for updating us on these stories and information, keep it coming.
DJS

something funny here about all of this. she gets charged with...

...against a "federal officer" i presume, but all of the charges are from the county? ? i mean ?!! oh gee. i guess if one entity cannot charge you, the other will step forward. man, talk about whoredoms. but the thing is here is jurisdiction. why state charges if the TSA has jurisdiction?

oh well, it's a rhetorical question i guess. i know the answer, but hate to admit that there is very little "order" left in our "law and order". i guess randy weaver, the branch davidians, and terry nichols should point out the hypocrisy here in how they got tried in federal court for crimes against them in a sovereign state. man, our country is becoming so ate up. :-(