When A Fugitive Dies, "Blue Privilege" Makes All the Difference 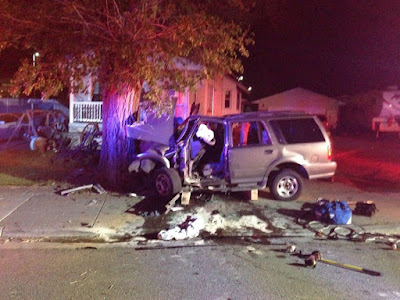 Pleasant Grove, Utah resident Ashleigh Holloway Best killed herself in the early hours of May 17, 2016 when she lost control of the stolen 2002 Lincoln Navigator she was driving and plowed it into a tree. The man who was pursuing the thief, Kenneth Lee Drew, was the authorized representative of the vehicle’s lawful owner. On January 11, Drew was sentenced to prisonbecause the thief foolishly killed herself.

If Drew had been a government-employed law enforcement officer, rather than a private repossession agent, he would likely have received a hazardous duty commendation following Best’s admittedly tragic death. After all, police officers in Utah and elsewhere routinely use lethal force in dealing with citizens who seek to avoid being physically “repossessed” by agents of the state that supposedly owns them. Most of those cases don’t involve people being pursued for actual crimes, such as automobile theft.

Like too many families, the Bests had been overwhelmed by financial reverses and had fallen behind in their car payments. They reportedly were helping care for ailing relatives, and had only one family vehicle. The desperation that gave rise to Ashleigh’s self-destructive decision is as understandable as her actions were inexcusable.

By giving pursuit once Best fled with a car she no longer lawfully owned, Drew acted imprudently. It has never been proven that he deliberately forced Best off the road at the end of the chase, which would have been both criminally irresponsible and self-defeating. In addition to the fact that it is perverse to risk killing someone to recover a stolen car, ramming a vehicle one is seeking to repossess makes no economic sense. It’s likely that Drew’s regrettable decision was a product of frustration, rather than malice.

If he had called the police to report an auto theft, the outcome for Best might well have been identical – but the state operative whose actions led to the fatal crash would be protected by the pernicious legal fiction called “qualified immunity.” That privilege enjoyed by state-licensed plunderers is not extended to private property recovery agents, whose jobs are both unpleasant and frequently dangerous.

“There was [sic] lots of mistakes made that night,” insisted Brennan Best, Ashleigh’s widower, after Drew was sentenced. “I don’t think what was done [to Ashleigh] was done on purpose. But I do believe we all need to be accountable for our own actions.”

Drew made a horrible, perhaps unforgivable, mistake. Brennan and Ashleigh Best conspired to commit a crime – theft through fraud.

According to the investigative summary in Drew’s indictment, when he arrived at about midnight to reclaim property for which the Bests were no longer making contractually required payments, Brennan interfered with the repossession and demanded an opportunity to make a new arrangement with the creditor. Drew agreed with that proposal, and began processing the necessary forms. While the repo agent was thus preoccupied, Best covertly instructed his wife to take the automobile to a relative’s home.

At that point, Mr. Best became an accomplice in grand larceny: At that point, pending completion of a new payment plan, the automobile was the property of the creditor. If Best had been sincere in his offer to Drew, there was no need to abscond with the vehicle. (In fact, if the couple had filed for Chapter 7 bankruptcy, they could have avoided repossession of the Navigator.)

After Ashleigh climbed into the car and sped off, Brennan, abetted the theft by “trying to place himself in front” of Drew’s tow truck “to prevent it from following the Navigator,” according to the police account. Ashleigh’s conduct suggests that her husband had instructed her to “drive it like you stole it” – which, in fact, was precisely what she had done.

If her excursion had been innocent, the guilty-minded driver would not have endangered the lives of others by careening through residential streets at speeds of up to seventy miles an hour. Drew acted with culpable recklessness as well – but Brennan Best is criminally liable in the death of his wife, whether or not state functionaries will admit as much.

Unlike police officers in similar situations, Drew – a private peace officer enforcing a legitimate property rights claim – was not offered “Garrity” protections, which would have meant that his initial statement to police could only be used for disciplinary action, rather than criminal prosecution. Nor was he allowed the luxury of reviewing video records of the incident prior to speaking with investigators, another perk extended to police in Utah and elsewhere.

Because of this, Drew’s grief-stricken, guilt-ridden disclosures were critically scrutinized by police eager to build a criminal case. If he had been a fellow member of the Punitive Priesthood, Drew’s equivocations and self-contradictions would have been seen as evidence of trauma, rather than proof of criminal intent.

“I’ve never seen a repo agent be this aggressive,” insisted Pleasant Grove Police Lt. Britt Smith shortly after Drew’s arrest. This is only true to the extent that Smith fails to perceive his costumed comrades as “repo agents” of a sort – because lethally aggressive tactics of the kind Drew allegedly used are quite commonplace. 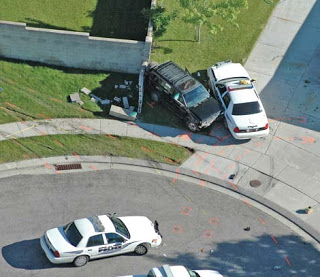 Investigators claimed, but have not proved, that Drew forced Best off the road using a variation of a PIT (Precision Immobilization Technique) maneuver. A PIT maneuver is to be used only in situations where deadly force is justified. Yet hyper-aggressive police in Utah employ that tactic frequently; one recent incident of that kind involved a driver suspected of driving while intoxicated. Another episode, interestingly, involved recovery of a stolen car.

Almost six years to the day before the avoidable, largely self-inflicted death of Ashleigh Best, South Jordan Police Officer Jared Nichols used a PIT maneuver in an effort to trap an SUV driven by Wade Pennington in a cul-de-sac. Pennington, who was on probation and had a court hearing scheduled a few days later, was being pursued without cause by Officers Nichols and Brett Lopez. The official story was that they suspected him of theft, but their supervisor, Sgt. Allen Crist, found no evidence to support that suspicion.

Crist explicitly ordered Nichols not to pursue Pennington, but that order was ignored.
“I’m going to take him out,” Nichols said just a few minutes before trapping Pennington. He and Lopez went “gun-up” to make a felony stop, despite the fact that their target was not suspected of a felony.

After Nichols t-boned Pennington’s SUV, Lopez emerged with a drawn gun and screamed at the driver to “get on the ground – stay where I can see you.” At roughly the same time, Nichols unloaded on Pennington at point-blank range. Immediately after shooting the victim, Nichols snarled, “Freeze, Wade! I’m going to shoot you. Get down on the f***ing ground!”

Pennington was murdered – no other word is adequate – because he was trying to comply with Lopez’s demands. The officer who murdered him spat out two contradictory commands after firing the deadly shots.

The last words Pennington heard were a sadistic taunt hurled at him by Lopez: “You’re dead, mother****r!”

Nichols and Lopez were cleared by their department within 72 hours. Despite having the opportunity to refresh their memories by watching dashcam video of the chase and subsequent killing, the officers told stories that were self-contradictory, and contradicted each other.

Lopez was eventually fired for violating the department’s high-speed chase policy, but never faced criminal prosecution. As a matter of equity, the same punishment would have been appropriate for Kenneth Drew, who violated his company’s policy by pursuing a vehicle he had been sent to repossess. The only other morally suitable option would have been for Lopez and Nichols to serve the same sentence imposed on Drew. 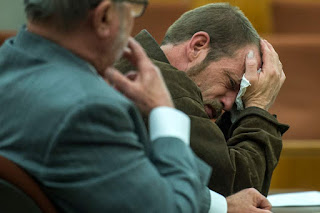 Officer Nichols not only avoided prosecution, he was promoted. The murder of Wade Pennington was the second time Nichols had slaughtered an unarmed man after immobilizing his vehicle in a parking lot: He had followed almost exactly the same procedure in executing Darren Neil Greuber, who like Pennington was a parolee, in 2007. The investigating officer who had cleared Nichols in the Greuber killing, West Jordan PD Sergeant Michael S. Leary, performed the same right of absolution after Nicholas gunned down Pennington two years later.

As someone not invested with Blue Privilege and buoyed by the financial support of a police union, Drew was maneuvered into pleading guilty to manslaughter as part of a plea bargain in which prosecutors asked for a suspended prison sentence.

Utah Fourth District Judge Robert Lunnen, a callow, vindictive jurist who had been on the bench for less than a month, discarded that plea agreement, imposing a sentence of one to fifteen years in prison. The obscenely severe sentence, I suspect, reflects the hostility of tax-fattened functionaries toward those who challenge the State’s monopoly on “justice.”

This week's Freedom Zealot Podcast examines the death of Ashleigh Best, the murder of Wade Pennington, and other examples official privilege:

Please be sure to visit the Libertarian Institute, and share the site with your friends.

If your column proves anything, it proves that the Utah media is just as corrupt as the national media.

I live in Utah and had never heard the information regarding Best and her husband's collusion in trying to steal the SUV.

All I ever recall hearing was how evil the tow truck driver was for doing what he did. (I will admit that I questioned this view from the beginning as I understood Best to be a car thief).

Always appreciate your excellent insight to issues that are never as simple as they seem.

You really hit on something with this one Will. The one cop killed 2 different unarmed men getting out of their cars. This brings up a few simple questions. How many unarmed human beings does this cop have to kill to get a promotion that puts him out of patrol and not around the citizens so no more unarmed people are shot and killed by him. What is that number 3? Maybe 6? or how about 12 an even dozen unarmed people that he guns down. What is the magic number where the people who run the show removed him so the citizens are safe from him? Is there a number of unarmed people that are guned down by these kinds of cops to get them off the streets or is it a case by case basis? Is there such a number before the light goes on?