(No) Honor Among Thugs 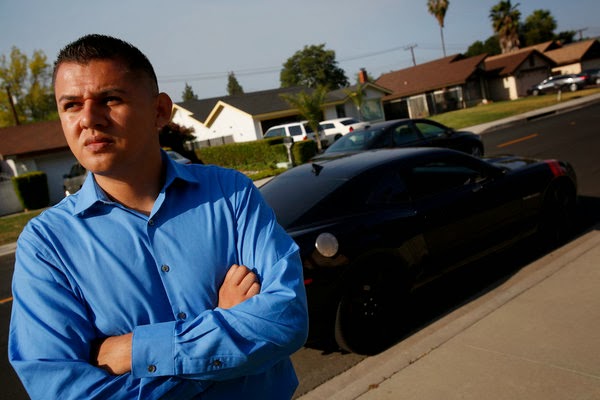 Like countless other people, Los Angeles resident Sergio Arreola was the victim of criminal violence by the police, and forced to defend himself in court because his assailants were encouraged to lie and allowed to do so without punishment.

The Pomona, California police officers who beat Arreola in front of his wife told the terrified woman that they would make sure that the victim lost his job. That sadistic prediction was fulfilled within a day, after which Arreola discovered that his arrest had made him practically unemployable, and his family confronted the prospect of losing their home.

Soon after Arreola posted bail, three of his family members were arrested on contrived charges and threatened with deportation. The LA County DA’s office dropped a charge of assaulting an officer, but insisted on pressing the charges of resisting arrest and obstruction. Six months after the assault, Arreola was acquitted by a jury that – unlike a similar panel convened more recently in nearby Orange County – was honest enough to act upon the abundant evidence that the cops who attacked Arreola had done so without justification, and lied about their actions.

Arreola’s occupation may provide a partial explanation for that jury’s willingness to acquit him: At the time he was beaten and abducted by two police officers in Pomona, Arreola
was a rookie officer with the LAPD.

After completing his shift on April 11, 2012, Arreola received a call from his wife asking him to help out her brother, whose car had suffered two flat tires. When he reached the scene, his wife was there, along with a tow truck operator. His wife was speaking with Eric Hamilton, an officer with the Pomona Police Department.

Arreola, who had changed out of his government-issued ensemble, parked his car and walked over to join his wife. When he got close enough to overhear the conversation, Hamilton pivoted and addressed him in what was later described as a “rude, demeaning tone.” 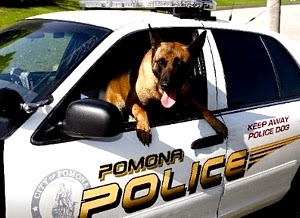 “Who do you work for?” barked Hamilton. “Let me see your badge.”

Arreola deferentially replied that he worked for the LAPD, and offered to retrieve his official jewelry, which was pinned to a jacket in the trunk of his car.

“I didn’t f**king ask where it was – I said `Show me your badge,’” sneered Hamilton.

Arreola complied, grabbing his jacket and showing it to Hamilton.  That prompted Hamilton to berate Arreola for opening his trunk “without being ordered to do so.” Pointing to a spot near the scene of his brother-in-law’s breakdown, Hamilton commanded Arreola to move his car to the parking place under threat of arrest.

By the time Arreola had re-parked his car, a second Pomona Officer bearing the ironic name Chris Tucker had arrived “Code 3” – that is, with lights and siren running. After Tucker conferred briefly with Hamilton, he ordered Arreola to turn around and place his hands on his head.

“Why are you doing this?” Arreola plaintively inquired, after telling Tucker about a “back-up” weapon in the pocket of his pants. “I did not do anything wrong.”

Like thousands of other people in similar predicaments, Arreola turned to fellow citizens for protection against the police. He urged several bystanders to record the incident on their cellphones. This prompted immediate retaliation from Tucker, who jerked Arreola backwards, then began punching him in the ribs. Hamilton quickly joined in. The attackers threw the victim to the ground – one of them savagely torqueing his left arm while the other applied a choke-hold. All of this was set to the accompaniment of the familiar chorus chanted by rapists and police: “Stop resisting! Stop resisting!”

As they dragged Arreola away, the assailants threatened to arrest his brother-in-law for recording the assault. In keeping with unofficial but routine police procedure, they stole his cellphone and deleted the recoding.

Audio recordings made by the officers’ body microphones captured them gloating about the injuries they had inflicted on Arreola.

“Yeah, I just about broke his left arm,” one of them – not knowing if it was Hamilton or Tucker, I’ll call him “Officer Beavis” -- snickered. “Just, I wanted to break his, break his arm.”

“I had my arm around him, chokin’ his ass out,” replied Officer Butt-head. Given that a chokehold is a lethal force technique, the second officer unwittingly confessed to an act of attempted criminal homicide.

Under even the most emancipated definition of “reasonable force,” all of this was unjustified – and none of it was mentioned in the official reports filed by Hamilton and Tucker. Engaging in what trained liars in uniform describe as “creative writing,” the officers claimed that Arreola was angry and put up a fight when they attempted to arrest him, which supposedly justified a violent response.

Treatment of this kind is not uncommon as a form of “street justice” inflicted as summary punishment for “contempt of cop.” But Arreola was anything but contemptuous. Furthermore, he was a member – albeit on a probationary basis – of the Exalted Brotherhood of Official Coercion. Members of that caste generally receive “professional courtesy,” rather than an unprovoked beat-down. What, if anything, did he do to precipitate such abuse?

One obvious possibility is that the officers acted out of ethnic bigotry. Arreola, who is of Mexican descent, received his citizenship following a five-year stint in the Marines, including combat in Iraq.

Pomona’s population is roughly two-thirds Latino, and there have been previous incidents of as-yet unexplained police violence against Latino males by city police, who are part of a department that is deeply imbrued with corruption of every kind.  That theory is undermined somewhat by the fact that the rank-and-file of the Pomona PD includes many Latino officers, some of whom have been implicated in episodes of abuse.

Another potential explanation is that the officers who assaulted Arreola did so out of what his subsequent lawsuit described as “professional jealousy”: His job with the LAPD was better-compensated, and regarded as more glamorous, than their posting in down-scale Pomona.

Resentment of that nature would explain the vindictive pleasure Hamilton and Tucker displayed as they taunted Arreola’s terrorized wife.

“Your husband just lost his job,” Hamilton smugly told her after she had seen him beaten and handcuffed. “I’m going to make sure your husband is never a police officer in the State of California again.”

Within a day, Arreola had been terminated from the LAPD and told to turn in his personal effects kit, to which has been given the disturbingly appropriate nickname “War Bag.” Since his arrest and termination made him ineligible to work with any other law enforcement agency in California (pending his acquittal), Arreola applied to re-enlist in the Marines – only to be turned down for the same reason.

The DA’s office was unwilling to drop the resisting arrest charge, demanding that Arreola accept a guilty plea in exchange for probation. 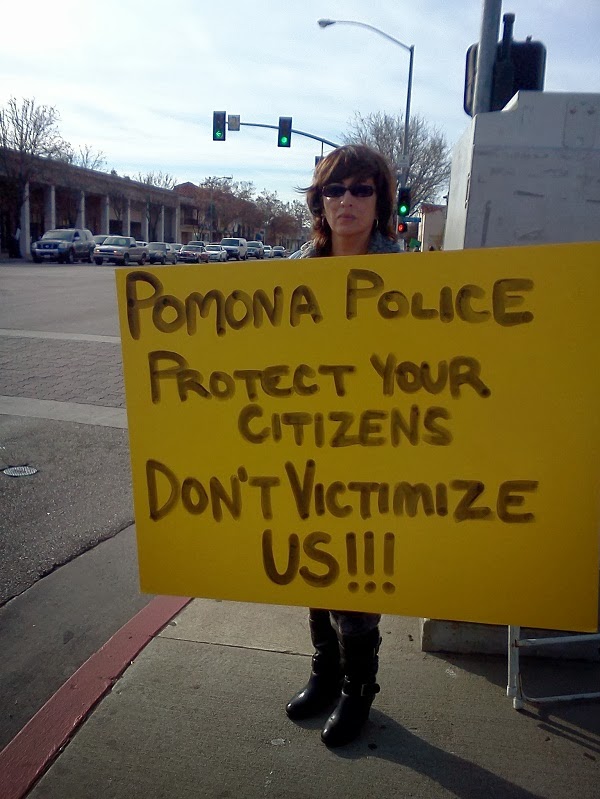 Following his acquittal in December 2012, Arreola filed a federal lawsuit against Hamilton and Tucker, as well as the City of Pomona.

In their reply to the lawsuit, the defendants predictably invoked the evil doctrine of “qualified immunity.” The reply also retailed the now-disproved claim that Arreola “refused to follow the reasonable instructions and directions and commands of the police officers, and attempted to assault, batter and use deadly force on the police officers, [and also] presented a threat to others in the vicinity….”

Interestingly, the reply also asserted that the officers were not liable for Arreola’s injuries, because the victim “voluntarily assumed the risks involved in his conduct and appreciated the foreseeability of being injured” by them.

Granted, that claim was wedded to the perjured description of the incident offered by the officers: On that construction, Arreola got what he deserved because he defied the police. The incontrovertible truth is that he meekly submitted to every demand they made – and was beaten and kidnapped by them anyway.

The irresistible conclusion to be drawn from this is that by allowing police officers to ply their violent trade among us, we all are voluntarily assuming “the risks involved” and should appreciate “the foreseeability of being injured” by them without cause or justification. After all, if there is no honor even among government-licensed thugs, what hope is there for innocent and harmless people who come to their attention?

If you can, please donate to help keep Pro Libertate up and running. Thanks, and God bless!

HAHAHAHA this is funny I hope Arreola didn't think the police would be nice to one of there own seriously there is no honor among thugs only survival of the sickest and meanest.

If knocking down a fellow cop to get ahead is an option they will take it there no friends there only tools to use and throw away such is the government greed and evil are good honor and integrity bad and its licensed killers in the movie lord of war Yuri Orlov knew this well and left the country before the US could scape goat him for whatever reason or no reason.

This story has a more or less happy ending. After his acquittal Lapd welcomed him back with open arms and a federal jury awarded him 260k

seems like it should be They've instead of They're. I know it's a quote, but seems with double checking.

Thanks for catching the typo!

i wouldn't call this too much of a happy ending--the city is 260K poorer and those two cops are still employed.

and he still may have those injuries.

To Paul,
The oinker will be dispensing his own brutality the very next time he's out cruising and plays the role of Kings' highwayman when he waylays one of his neighbors at gunpoint for forcible revenue extraction and quota-filling by issuing an extortion demand (traffic ticket)after having cherry-picked the poor sap out of the crowd for driving safely, er, "speeding" at 45 in a 40 along with everyone else on the road.

On the one hand, one pities Arreola as a victim of injustice. What happened to him should not happen to anybody.

On the other hand, Arreola himself is a card-carrying member of this "brotherhood" of victimizers whose job is to visit precisely such injustices upon us "mere mundanes."

A "happy ending" to this story would be both the Pomona thugs and the LA thugs getting their comeuppance.

Didn't read any of the comments yet. Look at the outcome, the joke is on us as it always is. The criminals go free unscathed and unpunished... and the we pay restitution to the victim.

Go read some of the comments at policeone.com. If this story was about two costume wearing thugs who beat up some mundane, they would all be defedning the cops with no shame regardless of the story, details, facts.

Cops are such pathetic cry-baby victim wannabe's. They cry about being sued all the time, and how they should sue back. Their hypocrisy is pathetic. What do they care about being sued, even if they lose/settle... they are personally out nothing.