Of Prostitutes, Prosecutors, and Other Miscreants 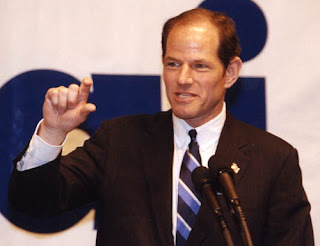 Eliot Spitzer, paladin of justice and connoisseur of high-priced prostitutes, seen here in happier days: I know there's a joke here just screaming to be let out, but I'll leave the details to you, oh reader most gentle and refined.


Ernst Theodor Amadeus Hoffmann was a 19th Century polymath -- a prolific writer, caricaturist, composer and artist whose achievement-rich life was abruptly ended by illness in his 46th year. He's remembered -- to the extent he is remembered -- primarily as a weaver of supernatural tales in the style of Goethe.


Hoffmann began his public career as a jurist committed to vindicating individual rights in an age inhospitable to liberty. He was a judge on the Prussian Supreme Court and a member of the "Commission for the Investigation of Treasonable Contacts and Other Subversive Activities." It was Hoffmann's view that "Not even the highest government officials are above the law; rather, they are subject to it like every other citizen."


Accordingly, Hoffmann had a parting of the ways with his professional colleagues, who saw the law as a means of forcing the common people to submit to the unaccountable rule of the elite. Toward that end, informants and police were planted thickly across the kingdom, and every tremor of discontent was dealt with as incipient treason. This was a period described by Paul Johnson, in his book Birth of the Modern, as the "Golden age of political police."


When alleged subversive Freidrich Ludwig "Turnvater" Jahn was brought before the Commission, Hoffmann provoked a scandal by condemning the police and the prosecution for the illegal tactics used against the defendant. Denouncing the entire Prussian counter-subversion system as "a whole web of arbitrary acts, blatant disregard for the law, [and] personal animosity," Hoffmann actually represented Tunvater Jahn in a lawsuit against a Karl Heinrich von Kamptz, the police official behind the malicious prosecution. 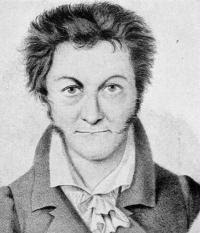 ETA Hoffmann, in a self-portrait.


Years later, Hoffmann included a fictionalized account of the Turvater Jahn case in an episode from his story "Master Flea." In that tale, von Kamptz, represented by a character named Knarrpanti, explained the basic tenets of Prussian "justice" of the time:


"When reminded that, after all, a crime had to have been committed for there to be a criminal, Knarrpanti opined that once the criminal had been identified, it was a simply matter to find out what his crime had been. Only a superficial and careless judge would ... not be able to slip into the inquest some small lapse or other on the defendant's part that would justify the arrest."


Like many others who used satire as a vehicle to express officially proscribed truths, Hoffmann found himself arraigned on criminal charges -- in this case, he stood accused of "revelation of court secrets." His untimely death, on July 25, 1822, came while he was awaiting trial. Von Kamptz went on to become Prussia's Justice Minister ten years later, in which capacity he frequently acted on the principle Hoffmann revealed in his satire: It's not necessary for a crime to be committed to identify and punish a "criminal."


Von Kamptz could be considered the prototype of the modern prosecutor -- the grand progenitor of such despicable creatures as Michael Nifong, Andrew Thomas, Rudolph Giuliani, and -- of course -- Eliot Spitzer, who has been known in some business circles as "George Fox," and in some court documents as "Client #9."


Sinclair Lewis famously referred to his literary creation George F. Babbitt as a man who "made nothing in particular, neither butter, nor shoes, nor poetry"; in similar fashion, Spitzer and his discreditable ilk do not create wealth, nor do they contribute to the protection of individual liberty and property. They are, however, quite cunning in creating "crimes" ex nihilo, and utterly shameless in capitalizing on the misery they propagate.

Spitzer built a successful career out of targeting certain people as "criminals," and then inventing the "crimes" after the fact. There is a certain symmetry to be found in the fact that his political career has been grievously (one hopes mortally) wounded because he eagerly and arrogantly committed a non-crime* -- solicitation of sex for money -- that provided him with prime opportunities for prosecutorial preening. 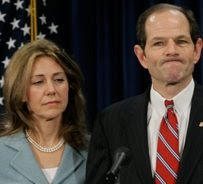 But the sobering aspect of this story -- apart from the vivid reminder it offers of the damage that morally undisciplined men can do to their wives and families -- is found in this fact: The inquiry into Spitzer's conduct began when his bank reported that he was moving large amounts of cash out of his account.


In other words, he was spending his own money in amounts that the government deems suspicious. In Spitzer's case, the money was spent on activities forbidden by the criminal code. But an individual who manages his money in ways not authorized by the federal government can face criminal penalties, or civil "asset forfeiture," without committing a crime of any kind. And bank personnel are expected -- nay, required -- to act as dutiful informants whenever such non-criminal transactions occur. And Spitzer has done more than his share to criminalize perfectly legitimate business and financial behavior.


Few have done more in recent years than Spitzer to weave "a whole web of arbitrary acts, blatant disregard for the law, [and] personal animosity." Witness the threat Spitzer made against one businessman who had the temerity to criticize the then-Attorney General of New York in a letter to the Wall Street Journal: "I will be coming after you. You will pay the price. This is only the beginning and you will pay dearly for what you have done. You will wish you had never written that letter."


It's tempting -- almost overpoweringly so -- to set aside one's principles in the eager wish to see the author of that threat experience just a taste of what he's force-fed so many others. But there would be nothing to gain by doing so: Because of the perversions of law he has abetted, and his connections in the Power Elite he has so faithfully cultivated, Eliot Spitzer probably doesn't need our sympathy. In the system Spitzer has served, punishment is reserved for those who are innocent and powerless, and mercy is reserved for the powerful and guilty.

It is at points like these that I part ways with Humanist Libertarianism. The true basis for justice is not in the human wisdom of a free market, nor in principles of non-aggression, but in the Law of God. On this basis, prostitution is indeed a crime, and so is adultery, fornication, homosexuality, and other sins where there may not be a human plaintiff for redress.

William, that last line is a powerful truth:

Keep up the great writing!

As you've shown, one doesn't have to be a fan of Spitzer's to know what this is really about He's just another victim of the surveillance state.

I was the target of just such government sponsored funny business a few months ago. My house was in foreclosure, and the payment had to be on the record by Monday. I had the money--actual cash in hand--and could find no way to transfer it to the mortgage company. My bank does not do regular funds transfers on weekends. They also use MoneyGram for non-customers, but the mortgage company will only deal with Western Union. Since a WU location was nearby I went over there and turned over my cash. It took over a hour to transfer the funds, or so I thought. We had to make several attempts since one thing after another wouldn't work. Finally, it went through--only it didn't. I learned later in the day when I got a bad feeling and tried to re-verify the transfer that it still hadn't gone through. WU had "no record" of my transaction, though earlier they said they did and I had a tracking number, which they now said didn't exist. Fortunately, I was able to retrieve my cash from the WU office. The clerk checked into what had happened and she was told that the "FBI" routinely tagged WU transfers of over $1000 (or maybe $1500--I can't remember). I'm unclear if this is a random check or all such transfers. I ended up at my bank on Monday morning and the transfer went through immediately without a hitch.

"He's just another victim of the surveillance state."

That is very true, and I do disapprove of his victimization. However, given his history as an abusive prosecutor and a successful and highly-placed operator of the surveillance state, I hope I can be forgiven a little smile as Spitzer's butt gets chewed off by his own dog.

Not that it will, of course. As Mr. Grigg points out, Spitzer is well-positioned to expect -- and receive -- the state's mercy.

Shackle the State.Get them out of the bedroom and the boardroom. I dont approve of a reprobate lifestyle however I fear the results of empowering the State to fight against it. As long as the reprobates refrain from harming the life and/or property of others- they can do what they want.
On another topic, I always suspected Spitzer led a weird double life. Between his love /lust for power and his callous disregard for others you just knew that other areas of his life were also a wreck.

When it's a guy in the elite like Spitzer, flags have to be raised. Unless an FBI underling went directly to the press, exposing him would involve getting permission from a someone really high up. It's no secret that senior political officials are involved in some serious perversions. Why him? Why now?

Speaking to Keith's comment, it is all too important not to forget that it is the Law of God and duty of God to punish such crimes as prostitution just as is the case for unpaid fornication. It is not the duty of the men who make the laws of this land to punish hypocritically for one crime over another. When we talk about violatio of law in terms of prostitution we must keep in perspective that this is an act of mutual consent between two people.

Ah, the vagaries of real life. "There is none righteous; no, not one." Should I receive real justice, I'd be in the pokey now, never mind whether some laws are good or bad in themselves. While Spitzer has run roughshod over justice in many places and times, some of us few benefit even from such injustice. Spitzer is famous among geeks for stomping hard on some spammers and spyware distributors, too. The bad also fall under the wide-swinging scythe of an unjust harvest.

It's almost a sure bet that his enemies got him or he was threatening something above his paygrade, such as the discussion that he was looking into Larry Silverstein.

This is an example of why the Bush Administration's approach to FISA is very, very dangerous.

There appears to be some rumble in the blogosphere that Spitzer was being looked at as a possible running mate for one of the presidential hopefuls. If that is true, it could explain some of the inconsistencies of the whole thing.

The sickest thing I've noticed is the portrait of his wife standing next to him! That to me is incredible. How many times do you find these warped maggots carrying about and then when they're caught with their pants down they then drag their cardboard spouses out of the closet. Nothing smacks more of the word "guilty" than that shameless act.

Had to come back and put words to that photo.... can't help myself.