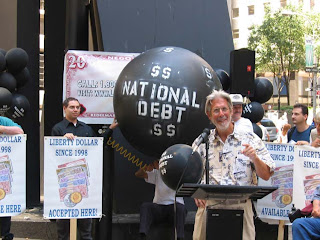 Bernard von NotHaus, the creator of the Liberty Dollar, is optimistic that he and his associates will have the benefit of “a spectacular trial” for the supposed crime of providing customers with something of value – platinum, gold, silver, and copper coins – in exchange for something innately value-less – the decorated ragpaper and junk metal slugs the Regime insists we treat as money.

Speaking with the New York Sun – the quasi-official publication of the Warfare/Homeland Security State – von NotHaus anticipated the opportunity to “put this country's monetary system on trial.”

He said this as if he truly believes the Regime would permit such a thing to happen. And even if von NotHaus were permitted the luxury of a trial – as opposed to having his company's wealth simply stolen through “asset forfeiture,” which appears to be the case at present – it's entirely possible that our monetary system will effectively collapse before the case against the Liberty Dollar is aired in a courtroom.

Relics of a time when there was money in U.S. currency: Kennedy Half-Dollars minted in 1964, the last year the Regime put silver in its official coins.

Should that collapse occur, von NotHaus – who, like most intelligent observers, has warned that the fiat money system eventually must destroy itself -- won't be allowed to argue that truth is a perfect defense. The FBI's investigation -- which took two years and employed the services of “confidential informants” and other covert means to collect evidence of peaceful, mutually beneficial commercial exchanges – is designed to set up a political trial, if a trial is even permitted.

According to the affidavit (.pdf) filed by FBI Special Agent Romagnuolo, the political objective of von NotHaus's organization, The National Organization for the Repeal of the Federal Reserve and Internal Revenue Codes (NORFED) makes it a subversive criminal conspiracy.

“As the organization's name implies,” writes Romagnuolo, “the goal of NORFED is to undermine the United States government's financial systems by the issuance of a non-governmental competing currency for the purpose of repealing the Federal Reserve and the Internal Revenue Code.”

As we should expect of someone good enough for government work, Romagnuolo is dishonestly amalgamating two issues here – the first being NORFED's creation of a currency intended to compete with the “dollar” (the quotation marks are apposite here, since the fiat scrip known by that name is not a dollar as defined in law), the second being the effort to repeal the measures that created the Federal Reserve and Income Tax systems. The latter is a far broader movement than the former, and it includes many millions of people who had nothing to do with NORFED or the Liberty Dollar.

Romagnuolo being a Fed, can't write with economy or clarity (only the top-of-the-line tax feeders can even speak clearly), so it's difficult to know to what extent conscious dishonesty, rather than mere ineptitude, is in play here. But his description of the “criminal activity” NORFED and its associates supposedly engaged in leaves the impression that anyone who seeks the same objectives is likewise engaged in criminal conduct, albeit through other means.

Consider: What are the elements of this supposed crime? More specifically, what is the mens rea, or criminal intent? The allegation is not that von NotHaus and his associates sought to commit robbery or fraud, but rather that they sought to bring about the repeal of existing laws, and changes in present institutions, through peaceful, consensual means.

Where “undermining” the nation's financial system is concerned, nobody does it better than the Fed. The greenback's relentless decline is driving economically marginal Americans toward starvation, while buoying the spirits of foreign detractors. Yet we are supposed to believe that NORFED's largely unsuccessful efforts imperil whatever remains of our national prosperity.

Now that Chavez and Ahmadinejad have made explicit public mention of the innate worthlessness of the fiat dollar, it wouldn't surprise me to see the Regime make an attempt to describe NORFED, the Liberty Dollar (and perhaps even the Ron Paul presidential campaign) as “ideational co-conspirators” with our foreign enemies du jour. Implausible as such a charge would be, it would still make as much sense as the “crime” alleged in the FBI affidavit. 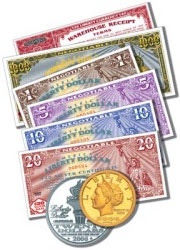 The “offense” here, in fact, is to find a creative and peaceful way to challenge the Regime's fraudulent financial system, which is upheld by lethal force. And it's not as if the Liberty Dollar crack-down illustrates that “the government hates competition,” in the words of a familiar punchline.

Nobody involved in the Liberty Dollar movement ever compelled anyone to accept the private currency, or deliberately defrauded people into accepting it. That's the government's racket. Nor did the movement circulate counterfeit US currency – that is, non-official counterfeit currency. As the FBI affidavit concedes, the Liberty Dollar was exactly what it was advertised – privately minted coins made out of precious metals, or warehouse receipts backed by the same.

Tyranny exists wherever government exercises the power to force people to live a lie. NORFED threatened to “undermine” the fraudulent and tyrannical system under which we live by providing a tangible example of a hard money system in operation.

Critics of the Liberty Dollar -- the kind of people who mistake sub-sophomoric snarkiness for substance -- sometimes describe it as the equivalent of Monopoly money, because it's not backed by the "full faith and credit" of the Regime. The inescapable truth, however, is that the dollar is an instrument of force and fraud, and since the Regime claims a monopoly on the same, it is the federal "dollar" that is best described as monopoly "money."

I want to find that person and make fun of him.

Sir,
Great post, very good information its a shame what has happened to the Liberty Dollar.

I can't believe some of the commentary coming from the news.

I think what has happened to our currency is worse than what happened to the Roman Empire when the coinage contained less and less precious metal.

Electronic debit seems to be the rule of the day. Cogitate on that for a few minutes. Our currency went from actual gold and silver to 1's and 0's on a computer in less than 100 years.

I refer to the new US FRN's as "Monopoly Money".

Here is an excellent parsing of the affidavit.

How ironic. We have feds spending our funny money like it's 1999 and when someone goes about creating precious metal medallions they have a hissy fit. It reminds me of a report I read this past year where the U.S. mint was concerned about how much it cost to produce pennies! They were worried that somehow they were losing 44 million or so a year! I laughed until I cried. The absurdity of it all in light of the bogus "dollars" dumped down the drains of the Iraqi desert.

I can't help but speculate that the real reason behind the Liberty Dollar raid is because it eventually would undermine the commoners' collective trust in the fiat FRN currency.

After all, faith and trust in FRNs are the ONLY attributes that make them have any value to begin with since nothing tangible or of lasting value backs them.

So I think the image of Ron Paul engraved on one of those Liberty Dollars merely provided the perfect pretext to act NOW. The Feds actually have probably been planning a raid from its inception in 1998, but, firstly, weren't too concerned with the faith and trust issue previously because the dollar wasn't in a free fall on the international currency exhange market and thus the mainstream news coverage. Secondly, because the vast majority of the average commoners paid Liberty Dollars and other alternate currencies based on precious metals little mind.

However, with the dollar in a free fall on the international scene well-known AND Ron Paul's image engraved on a Liberty Dollar backed by precious metals, the Feds from their corrupted perspective had to act NOW rather than procrastinate any longer.

Ron Paul is becoming increasingly well-known to the average commoner and the dollar's contrived devaluation is mainstream news, so the Feds thus acted because the Liberty Dollar, or other exchange mechanisms like bartering, could NOW really begin to seriously imperil the collective commoner faith and trust in the fiat currency.

Again, speculating here, but logical speculation nonetheless, the elitists MUST retain adequate, if even residual by some measures, faith and trust in the fiat dollar by any means necessary, at least until the consumation of their plans to formulate the NAU and its new supranational currency, the Amero or whatever final nomenclature is settled upon.

i saw several shows now where they call liberty dollars monopoly money, and counterfeit.. it really is unbelievable..
we are truely living in 1984, 2+2=5 . war is peace. stupidity is .. ug i cant even say its so absurd. but we are at a tipping point in this country right now. if the government gets away with stealing millions where no crime has been commited we are letting them them take our country

LOL! Honestly. They "took" the country long before we ever sprang into the world. And as far as "stealing" money goes, well, look around, that should be self evident don't you think.

If you seriously don't believe that the fiat system is working, why can you buy something with any denomination of cash that you have? Because whoever you're buying that something from values the cash.

Furthermore, I challenge you to find a $100 bill on the street and simply tear it up as a "worthless piece of paper". The worth of that piece of paper doesn't come from what we are told by the Federal Reserve, it comes from the fact that your neighbor (or the next person that walks down the street) does believe in it's worth. That way, it can be used as a medium of exchange and make it easier to buy things. So until you're willing to give someone else all the "worthless paper" in your pockets right now, and willing to give up consumerism and carry precious metal and scales with you to make everyday transactions, stop making posts/comments about such a trivial subject and focus on why cops taser people at roadside stops for no apparent reason (which I applaud, by the way.)

Chico -- Thanks for stopping by, and expressing outrage over the promiscuous use of lethal force by police.

If the fiat system is "working," why does the dollar consistently buy less? Breadwinners like myself with large families simply can't earn enough to keep up with the ever-accelerating and ever-elevating treadmill called price inflation. And saving money in dollars makes little sense when the value of our savings is stolen from us by the official counterfeiter, the Fed.

This ISN'T a trivial issue; it is the evil heart of the vile and vicious system under which we live. One relevant illustration: As the economy undergoes another contraction (typical of fiat money systems), property tax-starved state and local governments are becoming more aggressive in using the police as tax farmers. You know how the rest of that story plays out, I'll bet....