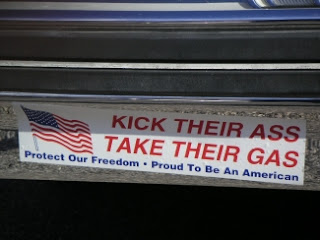 Among precautions against ambition, it may not be amiss to take one against our own. I must fairly say I dread our own power and our own ambition. I dread our being too much dreaded.... Sooner or later, this state of things must produce a combination against us which may end in our ruin.

Edmund Burke, Remarks on the Policy of the Allies, 1793

In the final decade of the 18th Century, an alliance coalesced among conventional European powers to contain the insurgent revolutionary forces of Jacobin-ruled France. Edmund Burke, easily the most perceptive and persuasive critic of the French Revolution's abominations and atrocities, yielded to no man in his concerns about the ambitions of revolutionary rulers and their allies.

But Burke was consistent in his concerns about consolidated and unaccountable power, and he understood that nothing worthwhile would be gained by permitting the imperial British Government to acquire the power it accused the French of seeking.

Burke admonished countrymen unnerved by the prospect of France exporting its revolution abroad and building a continent-spanning Jacobin empire to regain their composure and try to see England as outsiders would:

“We are already in possession of almost all the commerce of the world.... If we should ... be absolutely able, without the least control, to hold the commerce of all other nations totally dependent on our good pleasure, we may say that we shall not abuse this astonishing, and hitherto unheard-of, power. But every other nation will think we shall abuse it.”

Since other nations were not as serenely convinced of Britain's bottomless benevolence and endless generosity, they would eventually form a “combination” to prevent it from exercising unchecked political and economic hegemony, Burke pointed out.

The contrived furor over the Iranian “threat” -- which has recently been dialed down to a low drone, rather than the persistent shrieking we heard a few months ago – prompts me to adapt Burke's insights to our own condition, living as we do in the world's largest and most powerful empire.

We are constantly told that Iran is a world-menacing power led by the most recent edition of Hitler (re) Incarnate. Yet unless I missed something, Iran's military doesn't occupy a meter of foreign ground, even though Tehran does have allies and surrogates in Lebanon and Iraq, and warm relations with Venezuela's clown-tyrant Hugo Chavez. The Iranian regime has also been plausibly implicated in an act of anti-Jewish terrorism in Argentina some years ago.

Abhorrent as its ruling elite may be, Iran is not an aggressive power. Though some of its rulers may occasionally emit gusts of irrational nostalgia for the glories of Xerxes' empire, it requires an even greater investment in lunacy to believe that Iran poses a global threat. 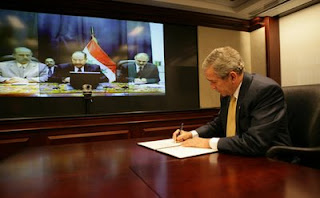 Meanwhile, Washington – which maintains a globe-straddling empire of military garrisons -- is putting the finishing touches on an “agreement” with its puppet regime in Baghdad, a Soviet-style pact bearing the Soviet-esque title “Declaration of Principles for a Long-Term Relationship of Cooperation and Friendship Between the Republic of Iraq and the United States of America.”

(Does anybody else suspect that every totalitarian bureaucracy – whether in Moscow, Beijing, or Washington – includes a group of scribes who are paid by the syllable to devise grandiose titles for imperial pronouncements?)

Owing to the fact that the Empire's Mesopotamian province is not yet secure enough for the Emperor to pay a personal visit for an official ceremony, the agreement was jointly signed by the Swaggering Fool and his Iraqi satrap, Nouri al-Maliki, via “secure video conference.”

The key quid-pro-quo in the arrangement is this: US forces will remain in Iraq in some configuration to prop up the Shi'ite-dominated regime (even as they build little Sunni fiefdoms ruled by al-Qaeda-connected warlords). For their part, Washington's Iraqi puppets will permit politically connected corporate interests rape and plunder Iraq. That's part of the long-anticipated payoff envisioned during the heady first months of Bush the Dumber's rule, when Viceroy Cheney's secretive energy task force pored over maps of Iraqi oil fields with predatory intent. 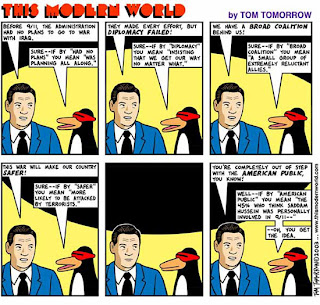 That energy task force, in turn, was the outgrowth of a report published in December 2000 by a Joint Task Force on Petroleum organized by the Council on Foreign Relations and the James A. Baker III Institute at Rice University. The final report of that task force (published with the “generous support” of Khalid al-Turki of Saudi Arabia, fretted that Iraq has “become a key `swing' producer [of petroleum], posing a difficult situation for the US government.... Saddam is a `destabilizing influence ... to the flow of oil to international markets from the Middle East.”

Therefore, concluded the CFR report, the US should conduct an immediate policy review toward Iraq, including military, energy, economic, and political/diplomatic assessments.

According to investigative reporter Greg Palast, who cites individuals with direct knowledge of the events, the report was handed directly to Cheney. He then convened an energy task force whose membership was largely identical to that of the CFR/Baker Institute task force. Then along came 9-11, and after making a feint in the direction of avenging the attack, the Bush Regime pivoted in the direction of Iraq.

And now, with 14 permanent US military installations sprouting up in Iraq, the “Declaration” signed by Bush and al-Maliki – essentially, an illegal military treaty completed without the constitutionally mandated Senate ratification -- offers yet another avenue to expand the war to Iran.

As Justin Raimondo points out, the “Declaration” contains a provision authorizing US military to conduct operations in support of “the Republic of Iraq in its efforts to combat all terrorist groups, at the forefront of which is al-Qaeda, Saddamists, and all other outlaw groups regardless of affiliation, and destroy their logistical networks and their sources of finance, and defeat and uproot them from Iraq.”

“It's in this context that the Kyl-Lieberman resolution, enthusiastically supported by Hillary Clinton as well as the Bush administration, takes on special importance: having targeted the Iranian security force known as al-Quds, or the Revolutionary Guards, as an officially designated `terrorist' group, the American garrison is already authorized to take on Tehran. The road to war with Iran is paved, and we're ready to roll no matter who sits in the driver's seat.”

All that's missing is a suitable pretext, and if Iran doesn't provide one the Bush Regime has proven itself capable of conjuring one ex nihilo.

But, as Burke would expect, Washington's blatant grab for political control over energy sources in the Near East has inspired other powers to push back. Beijing's eagerness to stiff-arm US naval vessels seeking to dock in Hong Kong offers one illustration. Moscow's moves to upgrade its strategic nuclear forces presents another.

But the most acute threat to the American Imperium, as Hugo Chavez gleefully observed at the recent OPEC summit, is the ever-accelerating demise of the dollar. "Soon they won’t be talking any more about dollars because the dollar is on a free fall and the empire of the dollar is coming down,” gloated the Venezuelan ruler, a comment we should file under “Things That Are True Despite Being Said By Loathsome People.”

Burke wouldn't be surprised to learn that Washington's ambitions have engendered combinations devoted to bringing about its ruin. But he would likely be amazed at the audacity of our rulers in trying to build an Empire on money borrowed from those (such as Beijing's ruling caste) who stand to gain the most from its eventual demise.

And like our Founders – whose courage and wisdom he appreciated, and with whose grievances he sympathized – Burke would be astonished and disgusted by complacent Americans who cannot understand how empire-building always ends in misery and servitude.

Coming Soon To A Province Of Washington's Empire --

He is a threat because he understands the problem the world faces.

He is an Iranian but as countries stand strong together in their own defense, it will be more powerful than one forceful tyrant.

great piece. i'm glad someone else saw that the agreement is an illegal treaty. i wonder where the senate is?

I generally agreed with 99% of what you write, but that average has just dropped to 98% by this:

The Iranian regime has also been plausibly implicated in an act of anti-Jewish terrorism in Argentina some years ago.

While some groups have used governmental powers to punish ethnic enemies, those enemies are almost always viewed as enemies of the state. That's because those in power view themselves as coextensive with the state, and, thus, the enemies, whether foreign or domestic, constitute a threat to the monopoly of their rule.

Even during the reign of the Nazi party in Germany, those jews who were targeted were done so because of the Nazi view that jews had become enemies of the state, not simply because they were jews. (The enemy-of-the-state was cast far and wide by the Nazi government.) While this is an unpopular way to explain the German government's actions toward jews, that's because Western political forces, in an effort to deflect criticism from their own policies of unbrided statist power, have spent the last 60 years protraying the Nazis as having murdered jews simply because they were jews. This, in turn, helps ensure that people do not realize that the German government was treating jews in the manner obtained because they were enemies of the state, rather than because they were jews. If more were to come to this realization, the people would become repulsed whenever their own government labeled individuals, or groups, as "enemies of the state." And isn't that exactly what our current government is calling people such as members of the Christian Identity movement and certain patriot and racialist groups? (Just wait until the Homegrown Terrorism Prevention Act Commission gets into full swing. You'll be seeing a lot of the label "enemies of the state.")

It has been alleged the motive for Iran to bomb the Asociacion Mutua Israelita Argentina (AMIA) center was based in the bloodlust of murdering jews, presumably simply because they were jews. And that's how the Nazis have been portrayed as well, even though they were eliminated because the jew had become (in the Nazis' eyes) enemies of the state. A judgment that transcended solely ethnic concerns.

You wrote that the Iranian government was "plausibly implicated." A subjective allegation (i.e., a "plausible allegation") can hardly substitute for evidence, especially where the murder of nearly a hundred individuals has been committed. And where there is no evidence, even circumstancial, one must rely upon motive. The likely scenario is that the bombing of AMIA was done for political purposes, not simply ethnic hatred. But what political gain would Iran derive from the act? And if not Iran, who would gain? Who would portray an act of political intrigue as common bloodlust? Who has in the past? Cui bono?