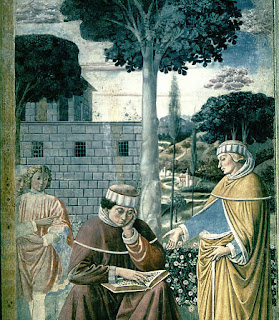 "Dr. Bob Jones III, chancellor of the fundamentalist Christian university in Greenville that bears his name, is looking past his religious differences with Gov. Mitt Romney and endorsing the Mormon for the Republican nomination for president, he told The Greenville News this afternoon.

`This is all about beating Hillary,'Jones said. `And I just believe that this man has the credentials both personally and ideologically in terms of his view about what American government should be to best represent the rank and file of conservative Americans.'....

Asked whether Romney’s religion was a stumbling block for him, Jones replied, `What is the alternative, Hillary’s lack of religion or an erroneous religion?... `As a Christian I am completely opposed to the doctrines of Mormonism,' he said. `But I’m not voting for a preacher. I’m voting for a president. It boils down to who can best represent conservative American beliefs, not religious beliefs.'"


"I venture this prediction: If the Republicans lose control of the House on November 7, Romney will be the 2008 Republican nominee. Christian Right leaders accustomed to a `seat at the table' of political power will wrestle with their collective conscience, and win."

"Politically conservative Mormons and Evangelical Christians are divided by serious disputes over doctrine, but presidential aspirant Mitt Romney has found a way to bridge that chasm: He stands `foursquare behind the president' regarding his supposed authority to order summary imprisonment and torture of anybody upon whom he chooses to visit such treatment."


If "beating Hillary" were the real objective, Rev. Jones would be supporting the only authentic constitutional conservative in the presidential field, the stalwart and principled Rep. Ron Paul.


But the grim, unyielding reality is that Dr. Paul -- a man who is Christian to his chromosomes, and loves freedom with every molecule of his being -- is disqualified in the eyes of Jones and his ilk for theological reasons: The God Ron Paul serves is Jesus Christ, Prince of Peace and Sovereign Lord of all creation, not the supposedly almighty State.


Mitt Romney, a man so empty he makes Peer Gynt's onion look like an over-stuffed calzone, worships only power. So despite differences over doctrine -- you know, relatively inconsequential stuff dealing with where and how we'll spend eternity, as well as how we're supposed to treat each other during mortality -- Romney and Rev. Jones are on the same page of scripture. To wit: An adulterated version of Romans Chapter 13.


I don't know what dwells within the heart of Rev. Jones or the other pulpit whores who have joined the GOP's seraglio. It is clear that where political matters are concerned, people of that ilk are entirely fixated on power -- obtaining it, retaining it, exercising it, cultivating it, serving it. Their kingdom is entirely of this world. They eagerly promote war and bloodshed, tyranny and torture. 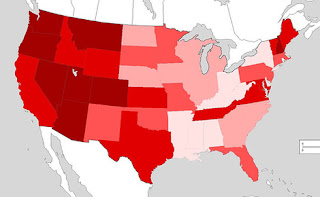 A map, courtesy of Andrew Sullivan, graphically illustrating the geographic concentrations of Ron Paul's donor base.


Today, as he picked up Rev. Jones' endorsement, Mitt "Double Guantanamo" Romney also expanded his campaign team to include a national security adviser who blithely says he would commit or order torture "in a heartbeat." That fellow will be in suitable company with Mel Sembler, Robert Lichfield, and other prominent Romney backers who have profited from the torture of American teenagers.

My friends -- those of you who are people of faith -- please, please pray on behalf of Korrin. She once again is seriously, dangerously ill, and I'm entirely at a loss in trying to help her. At present she's not in the hospital again (as I write, she's sleeping and we're receiving visits from a medical professional), but absent a dramatic turn-around, she's headed there once more.

This morning she was convinced that she was going to die. Please, keep her in your prayers.

In making that request I do not mean to slight or demean those of you, my friends, who are not believers. My faith is integral to who I am and how I view the world; it's why I am utterly obsessed with the matter of individual freedom and dignity, and why I detest war and tyranny to the uttermost depths of my soul. And at times like this my faith is the most important source of strength and solace.

I invite others to share it, but I have no right to impose it, even if that were possible: Each individual has to find it for himself. It's my hope that this is understood by those who share my passion for freedom but not my convictions about God.

If you (and she) do not object, this old Jew would like to not only pray for her, but to also recite tehillim (psalms) on her behalf. The tradition is to recite the psalm number of 20 + her current age. I can be reached at j.ericandreasen@yahoo.com

G-d Bless you and yours.

Dear JEA -- You have literally brought tears to my eyes with your kindness. Thank you, and G-d bless you as well.

You, your lovely wife and family are in my prayers. I lost my wife 3 years ago after she battled heart disease for 2 years.

I know that your faith in Jesus will see you and Korrin through this. It has been my experience that sometimes we are tested to the point that we feel we can't bear it any longer, but somehow, through God's grace we make it.

That is my prayer for you and your family. It ain't much, but it comes from the heart.

Keep up the great writing, I look forward to your thoughts, and those of the commenters, as I visit here as often as I can.

I'm not smart enough to say anything more than I'm standing with you, Will

Hang in there! Everyone's thoughts and prayers are with you and Korrin.

Will, Your demeanor under fire is truly an inspiration and example. Keep up the good fight. Be strong and of good courage. He is able and faithful, as you have testified. And we will go to the Father for you and Korrin.

I will certainly pray for Korrin, Will. Your perseverance and tenacity in the face of such a trial is amazing.

I agree with anonymous that the Psalms, the entire book, is a sustaining manna always, but especially in times of extreme trial.

Will,
We here at Trinity Bible Fellowship will continue our prayer vigil for Korrin. This includes Dr. Phil Fernandes and his wife Cathy, Greg and Linda Carey, Gary and Pam Tronson, and so many others of our church and former members who live throughout the US. We pray and ask that Y'shua the Messiah will heal her. May it be His will.
Amen.
-R. Wiesinger

Will,
My heartfelt prayers are with you and your dear Korrin.
Allen

Yahweh Elohim has both Korrin and you in the palms of his almighty and eternal hands. My prayers are with Korrin and I will continue to keep her in my prayers.

In Yahshuah The Only saviors name,

"But the grim, unyielding reality is that Dr. Paul -- a man who is Christian to his chromosomes, and loves freedom with every molecule of his being -- is disqualified in the eyes of Jones and his ilk for theological reasons: The God Ron Paul serves is Jesus Christ, Prince of Peace and Sovereign Lord of all creation, not the supposedly almighty State."

A few years ago, we kept hoping that most of our fellow Christians would get their heads out of the clouds and join in the freedom fight. But after 9/11 revealed their true colors, it appears that we may have been better off when they were just plain disinterested and uninvolved.

We surely did hate to hear about Korrin's setback and pray that her health will soon be restored. We also pray for an extra measure of comfort and strength to be poured out upon you and your family. May God bless and keep all of you.

This Catholic would like to add his prayers (and a fast) for your wife, Mr. Girgg, if there are no objections...

As a graduate of BJU I was seriously disappointed by this announcement. I spent 4 great years there in the 80's and found it a wonderful environment. The broader Christian community seems to be entirely misled by Limbaugh, Farah, et al.

Blessings to you and your beloved.

Your steadfast faith and devotion to all your beliefs, moral and spiritual, has touched my jaded heart in a fashion I thought not possible.

I will pray for you and your family, and perhaps borrow a little of your faith, in hopes that even the prayers of a different faith, offered in unity and good cause, shall lift up and bless your wife and family in this troubling time.

I really think Romney could win EVERYBODY over with the following speech on religion:

Yes your wife has been and will continue to be in my prayers.