Strangle the Bastard Child of Prohibition: Abolish the ATF!


Acting on its unerring instinct for expanding its own power while exacerbating the suffering of its subjects, the federal government, at the request of Mayor Rahm Emanuel and with the approval of President Trump, is planning to deploy a contingent from the entity known as the Bureau of Alcohol, Tobacco, Firearms and Explosives (commonly called the ATF) to Chicago.

This will do nothing to abate the problem of violent crime in the Second City, but will provide the agency with continued rationale for its misbegotten existence – which, as it happens, began in that same city decades ago.

The ATF was born as the Bureau of Prohibition – a brief experiment in federal behavior control that was made possible by the 18th Amendment to the US Constitution. Chicago native Elliot Ness, an inveterate self-promoter, headed much-celebrated bootlegging task force that spent six months raiding Al Capone’s breweries, which was in effect a price-support program for one of the gangster’s few morally sound enterprises.


Ness and his underlings eventually compiled a 5,000-count bootlegging indictment against Capone, which the US Attorney politely ignored as he filed tax-evasion charges that eventually brought about the gangster’s imprisonment – and enhanced the power of the immeasurably deadlier criminal syndicate called the IRS.

When the 18th Amendment was repealed, the Prohibition Bureau lost any rationale for its lawful existence – yet rather than being abolished, it was rechristened and given an even more expansive mandate.

Over the past 25 years, the ATF has been consistently mired in misconduct, often of a murderous nature. The April 1993 slaughter of the Branch Davidians in their sanctuary outside Waco, Texas began with an unnecessary ATF armed raid called “Operation Showtime” – which was staged to deflect attention from an internal corruption scandal. More recently the agency was involved in the “Operation Fast and Furious” imbroglio, in which it pressured federally licensed gun dealers to sell weapons to agents of Mexican cartels in a supposed sting operation.

In ways both grand and petty, the ATF has plagued and persecuted its betters. In one telling but long-forgotten episode more than a decade ago, a college student in Georgia found himself surrounded by a thugscrum of ATF chair-moisteners – one of whom planted his knee upon the victim’s neck, placing the full measure of his tax-enhanced girth behind it – because he was seen wearing a ninja costume as part of a campus event. Unfortunately for the victim, that campus was temporarily infested by ATF hirelings who – no doubt between visits to the local brothels – were undergoing “Safe Streets Training.” 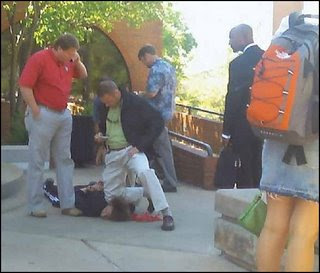 The ATF is an appendage of the Leviathan that exists without so much of an echo of a whisper of a hint of constitutional legitimacy, for the sole purpose of providing secure, albeit socially useless, employment for reprobates, criminals, and degenerates. No provision of the US Constitution authorizes any agency of the federal government to regulate alcohol, tobacco, or explosives, and the Second Amendment explicitly forecloses federal infringement of the right to own and carry firearms. This means that the ATF is literally a bastard agency carrying out an illegitimate mission.

The only useful activity for federal legislators consists of repealing existing statutes and abolishing federal agencies. Wisconsin Republican Congressman Jim Sensenbrenner, in defiance of all rational expectations for denizens of the political class, has made himself modestly useful by proposing a bill called the ATF Elimination Act that would impose an immediate hiring freeze at the agency and order its administrators to prepare a report on transferring its existing functions to the FBI, the Drug Enforcement Administration, and other departments.

“The ATF is a scandal-ridden, largely duplicative agency that has been branded by failure and lacks a clear mission,” declares Representative Sensenbrenner. Abolishing the ATF would be “a logical place to begin draining the swamp and acting in the best interest of the American Taxpayer.”

Regrettably, Sensenbrenner’s bill would merely channel the institutional feculence of the ATF into two other federal agencies that are badly in need of abolition. Agencies of that kind will endure while there are lives to ruin and liberties to infringe -- and those on the receiving end of its malign attention are willing to countenance their continued existence.


This week's Freedom Zealot Podcast: There are two varieties of "Trump Derangement Syndrome" -- and both of them are inimical to individual liberty --


Please visit the Libertarian Institute -- and share it with your friends!

The free, prosperous, and most important, pleasant society is INCOMPATIBLE with rule under the armed gangsterism of political control. Now Jefferson and Madison seemed to have grasped this point completely. And yet at the moment of truth, Madison and Jefferson seemed to have given into their fears that the mob comprised enough of a threat to the free individual, to the sanctity of private property, and to the elitists freedom to pursue a cultivated aestheticism as to warrant creation of a tiny and radically constrained government. The armed gangsterism of all the present day DEAs, ATFs, IRSs etc etc etc are the the tragic consequence of Madison and Jefferson's failure to have the courage of their convictions and found the de-governmentalized capitalist free market society they innately understood was the ONLY society capable of serving as guarantor of the free society, the aesthetically pleasing society, the society capable of furthering the ennoblement and cultivation of the individual.

A few points to make that need to be made. The 1968 Gun Act was taking word for word from the nazi 1938 Gun Laws. This has been proved to be fact, without any question. The 1968 nazi Gun Act grew the BATFE to massive new levels in all directions a federal agence can grow. Many men with honor left the BATFE because the higher up's were pushing for "Cases, Cases and more Cases", to grow the budget. Whch had nothing to do with anything but soaking the American taxpayers. Only to clarify the rightful name, parasites, from the top down. In all fairness, not that BATFE is the only government agency to have and engage in such a behavior. Gun laws and BATFE are not only against the Constitution but if someone can not live in a free society without a baby sitter, why are they? How is that fair to the lawful citizens?
Nevertheless, the entire foundation in modern times is, BATFE is here because America is living under the, 1938 nazi gun laws.

"... the ATF is literally a bastard agency carrying out an illegitimate mission."

to finish that thought, one might end the sentence annotated above with the following:

'for a govt that has, itself, become illegitimate by systematically ignoring what it is directed to do and doing all manner of action prohibited to it."

hopefully, some glorious day the masses will wake up to the biggest con ever perpetrated on mankind and reduce the beast to its proper size and place. i do not intend holding my breath until such takes place.

'next mission, trace the history of the ADL/ATF & ADL/FBI....
"They" all work for the same crime syndicate

from Donna in North Dakota

ATF - with BIA & Corps of Engineers - is reported to have entered private property without warrant February 2, onto acreage owned by Ladonna Brave Bull Allard's family where the Oceti Sakowin Camp is situated within The Standing Rock Reservation. Seems the federal agencies are coalescing in service to Big Business interests.

Will, did you see the latest on Daniel P Love - BLM provocateur & chief witness at the Bundy trial?

The difference that it actually loosened gun laws for Germans. So much for the "dictators hate guns" theory.

Nobody claims that "dictators hate guns," my truth-averse troll. They certainly approve of guns in the hands of their official minions, and can generally countenance them in the hands of loyalists.

The Nazis used inherited Weimar-era gun registration and confiscation mechanisms during their consolidation of power (just as Hitler employed an emergency powers provision of the Weimar constitution to rule by decree). They adapted and updated that set of laws to bring about selective disarmament of targeted sub-populations. As the New York Times observed in 1940, Nazi occupation forces routinely disarmed subject populations, as well.

In similar fashion, during the 1994 Rwandan genocide the "Hutu Power" regime (with the indispensable help of the UN) disarmed the Tutsi sub-population while caching arms that were later distributed to death squads. Behind every machete-bearing thug was a guy with a gun.

Your trolling game is getting weak, old man.

Gil's troll had me LMAO, that's some funny stuff, don't run him off.

Whether or not this troll is on the State's provocateur posse payroll, he is most certainly representative of the pool of low-cerebral-candlepower stooges from which such are routinely drawn.